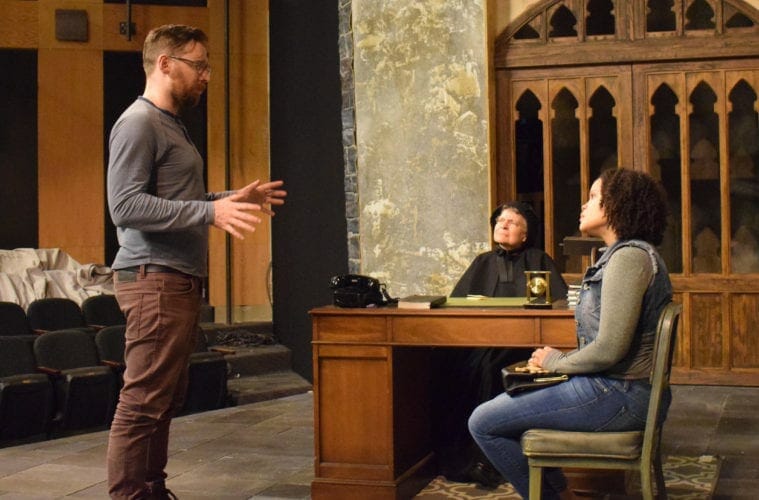 "The worst crime you can possibly commit as a director is to bore people," says Matt Torney, the next artistic director at Theatrical Outfit. Here. he's in rehearsal with Sarah Marshall (left, as Sister Aloysius) and Tiffany M. Thompson (as Mrs. Muller) in "Doubt: A Parable," now at the Studio Theatre in D.C., where he's the associate artistic director. (Photo by Elizabeth Morton)

Q&A: Matt Torney’s plan for the Outfit is “to make theater so exciting you can’t miss it”

And then there was one. His name is Matt Torney.

Theatrical Outfit vetted 56 candidates before choosing the Belfast-born, D.C.-based director as its next leader. Torney, 38, will move to Atlanta this spring and work with outgoing artistic director Tom Key before becoming the company’s sixth artistic director full time in May 2020, after the Outfit season closes with Cotton Patch Gospel.

So, why Atlanta and why now? Call it kismet. Torney does.

He says he wasn’t exactly looking for a new job, but as an associate artistic director (at the Studio Theatre in Washington, D.C.), friends and colleagues sent him job listings all . . . the . . . time. When he saw the Outfit listing, he was struck by its mission, the idea “of starting the conversations that matter.” As someone who grew up in Northern Ireland in the era that saw warring Catholics and Protestants killing thousands, he connected to Atlanta’s civil rights history. He also appreciated the Outfit’s LEED-certified, environment-friendly building. Director Matt Torney with his wife, filmmaker Amber McGinnis, at the Seattle International Film Festival. “I wasn’t going to move anywhere that wasn’t good for my family,” he says. (Courtesy of McGinnis)

Torney then came to town in mid-April for the Atlanta Film Festival, where his wife, filmmaker Amber McGinnis, was premiering her feature International Falls. The project’s screenwriter, a man named Thomas Ward, was also there. Ward, also an actor-playwright, has worked at the Outfit. Key attended the screening to show his support. Ward made the introductions.

“I’m standing in the back of the Plaza Theatre, and suddenly Tom Key is standing in front of me,” Torney says. Then McGinnis stepped in.

“My husband has been looking at your theater,” she said.

Key and Torney began talking. “Meeting him and being able to look him in the eye and see who he was, and the depth of care and passion that he embodies, made it feel like a kind of kismet,” Torney says. “It was a brief conversation but one that affected me very deeply.”

With that conversation, Torney says, the idea of leading Theatrical Outfit “was planted, and the universe kind of took care of the rest.”

Thus, he became one of the 56 candidates in what became a six-month process. The Outfit’s search committee reviewed every application and narrowed the candidate pool to 10. Each of the 10 had an hour-long interview with the committee, which then chose four finalists. Each finalist had a daylong interview that included coffees and meals and speaking with Key, Outfit Managing Director Gretchen Butler, board members and members of the full-time staff. Each also had to propose a three-show mini-season (Torney won’t divulge his.) Eighty percent of the theater’s board members dedicated time to finding the best candidate, says Marketing Director Ryan Oliveti.

This wasn’t lost on Torney.

“I’m amazed at the level of care put into the transition process,” he says, adding that “so much of the soul of the institution” in is Key (now in his 25th year at the helm). “It’s a sign of what is excellent about Theatrical Outfit. I don’t think there is any more they could do to make a new leader succeed, and I am profoundly grateful.” For now, Torney and McGinnis remain in Tacoma Park on the Maryland-D.C. border with their eight-month-old daughter, Isla May, and their 13-year-old pit bull, Murphy. Until the brood relocates, Torney will be banking airline miles on the D.C.-to-Atlanta express at a pretty good clip. He’s on contract to program the 2020–21 season and says he’ll be attending Outfit opening nights, meeting Atlanta artists, soaking up as much Outfit and Atlanta culture as he can and reading plays.

He also has a life outside the proscenium. He and McGinnis are such enthusiastic hikers that they spent their five-day honeymoon exploring the backcountry of Yosemite National Park.

Torney opened Doubt: A Parable, his final Studio directing assignment, on a Sunday night. The next morning, he talked about the life he’s leaving and the one he’s beginning in an hour-long conversation with ArtsATL. (The D.C. critics, by the way, liked his Doubt very much.)

ArtsATL: What was your very first theatrical experience in life?

Matt Torney: School nativity plays, playing a shepherd or a goat or Joseph. Also a dancing plum in a production of Jack and the Beanstalk. The giant fell asleep, and the fruit came to life. I was about nine years old.

ArtsATL: What was the moment you knew theater was the career for you?

Torney: When I was a teenager in Northern Ireland, there was a lot of violence and civil unrest, and it was a very deeply divided society. Theater for me was an escape from that world. It was a powerful thing. You would go into this room, and you could be anybody, and nobody really cared where you were from. In a place that was very unsafe, theater felt safe. It offered me a home, it offered me a community. Look for Torney (pictured with his filmmaking wife, Amber McGinnis, and daughter Isla May) to be in town full time sometime in the spring of 2020. Their journey to Atlanta began at the 2019 Atlanta Film Festival.

ArtsATL: Would you name one or two of your proudest professional moments to date?

Torney: One of my proudest professional moments was the opening night of Translations by Brian Friel at Studio last season. It was one of the first major plays I saw as a teenager in Belfast, and it blew my mind. Friel wrote the play as a response to the political violence that was ravaging Northern Ireland. It is about the relationship between language, identity, history and place, and explores what happens when the English army arrived in rural Donegal to “translate” all of the Irish place names into English.

The play offered a new understanding of the Troubles, and became a space where true conversation was possible, outside of the partisan political divides that separated us in Belfast’s streets. It was on my bucket list to direct for a long time, and when thinking about how to respond to the discord and disagreement in America last year, and also my complicated experiences as an immigrant, it felt like the perfect time.

I put together a team of incredible American actors and designers, and we went on a journey back to my home together. So many worlds were colliding — my old home and my new home, my childhood and my adulthood, the political divisions of Northern Ireland, and an increasingly divided America — they all met in this play and in this company of artists. It resonated deeply with the audience in D.C. I wrote about it for The Irish Times.

Another proud professional moment was when I collaborated with American playwright Leegrid Stevens to produce his play The Twelfth Labor off-off-Broadway in 2015 with his company Loading Dock. Leegrid was one of my main collaborators while I lived in New York, and we mounted a workshop production of the play at Columbia University way back in 2007. The epic play was based on the 12 labors of Hercules and told the story of a family struggling to get by on a farm in Idaho during the Second World War, and it spans many years and events in the life of the family. Developing and producing new plays is one of the most exciting things you can do as a director, and the deep relationship I was able to build with Leegrid around this play was very inspiring. I hope to find a way to bring it to Atlanta in the future. Torney, outside the theater, hikes with his wife in Yosemite National Park. (Photo courtesy Matt Torney)

ArtsATL: Can you name a few of your theatrical heroes?

Torney: Brian Friel [Translations, Dancing at Lughnasa] for his deep sensitivity to language and character and his ability to fold complicated intellectual and spiritual ideas into the fabric of everyday life. Arthur Miller for his profound moral consciousness and the scale and power of his writing. I saw Death of a Salesman when I was 15, and I will never forget the feeling when the curtain came down. It was something I felt again when I saw a production of A View From the Bridge in New York last year in a stunning production that barely had any set or props. My third writer is the contemporary American playwright Dominique Morisseau, whose play Skeleton Crew remains one of the highlights of my time at Studio. She writes about her native Detroit with both poetry and grit and is one of the most exciting voices in a golden age of diverse playwriting.

ArtsATL: Your work often is described as involving “innovative classics and dynamic new plays.” Can you expand on that?

Torney: I think a director’s job is to make something that’s alive. I don’t believe in doing museum pieces. I don’t want to make productions that people need a degree in theater to understand. Something I learned in university is, “You have to direct new plays like classics, and classics like new plays.” When I think back to the productions that have affected me most deeply as an artist, they are plays that spoke to me and spoke to the moment. The greatest gift that theater offers is the ability for people to literally be in the same place breathing the same air, seeing the same play.

ArtsATL: What title intrigues you most in Theatrical Outfit’s current season?

Torney: The rep. Let me say, if I had programmed the current season at Theatrical Outfit, I’d be very proud of myself. The rep is a stunning idea; to distill it down to 10 actors in that same space for both shows, to look at the idea of community? It calls for the stamina of athletes and the creative ingenuity to breathe life into all these characters.

ArtsATL: Will we be seeing more Irish plays?

Torney: I’m not walking in with an agenda. My intention is to program plays that speak powerfully to the audience in Atlanta, that bring up questions that are relevant to Atlanta and the nation and the world. I’m walking in with a lot of questions about what the community needs. The goal is to make seasons that create that sense of place and that live connection between actors and audiences. I would imagine in the next few years we’ll see a Brian Friel play, but if that’s not what we need, then those plays aren’t going anywhere.

The diversity of American theater is really exciting. That’s the thing people should look for in my programming — some things you’ve heard of and some you may not have. I think a healthy theater culture looks forward and backward at the same time. What’s most important is to make theater that’s so exciting you can’t miss it. The worst crime you can possibly commit as a director is to bore people. The first order of business is to find work that has heat and excitement to it.