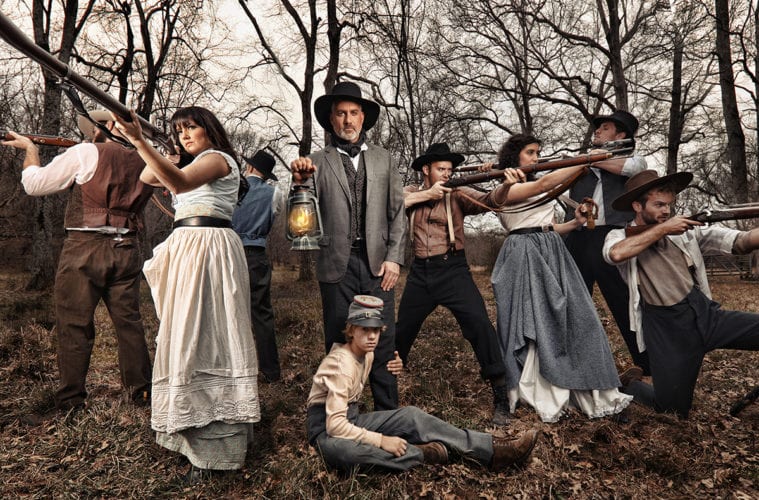 Artistic director Brian Clowdus knew he wanted a down-home blues singer with a large presence to star in Serenbe Playhouse’s production of the Civil War musical Shenandoah. So, when American Idol winner Taylor Hicks’ headshot came across his desk, he knew he was the perfect fit. Shenandoah runs March 13–April 7 in the Horseman’s Meadow in Serenbe and will kick off the theater company’s 10th season — themed “America.”

The musical tells the story of Charlie Anderson, a widower who lives with his large family in the Shenandoah Valley in Virginia. Charlie resists getting  involved with the war, but he is forced to take action when his youngest son Robert is taken prisoner by Union soldiers. Hicks, who won Idol in 2006 and toured with the Broadway musical Grease in 2009, will play the lead role.

ARTS ATL traveled down to the Serenbe community to sit in on a recent rehearsal during which Clowdus and Hicks worked through establishing emotional connections to the characters and their precarious situation. The synergy in the room was evident, and Hicks said this is an emotionally charged experience unlike anything he’s experienced in his acting career.

Here, the duo talks about bringing these characters to life, their complicated relationships with the South and why this story still resonates today.

ARTS ATL: Brian, what kind of performers were you looking for when casting this show?

Clowdus: With Shenandoah, it’s a country musical — it’s not your standard musical theater fare. I really wanted voices that have soul and country in them. Rachel Potter [Broadway actor and The X Factor contestant], who’s in the show, lives in Nashville as well, and she’s a country singer. I wanted this to have a country singer/musician vibe. Taylor’s playing his harmonica in the show. He’s going to be playing his guitar at some point, maybe; Rachel is as well. All of the cast has this home-spun vibe, sitting on your front porch, using instruments and your voice to tell a story and communicate through song.

ARTS ATL: Taylor, what has working in the Atlanta theater community been like for you so far?

Hicks: I’ve learned a lot from the actors here. The story is heart-wrenching to an extent. The really talented actors are pulling a lot of emotion out of me, which is something I’ve always had to do on my own in a music setting. I was an ice cream cone with 13,000 rhinestones [in Grease]; now I’m trying to hold my family together in the Civil War.

ARTS ATL: You were both born and raised in Alabama. What about your experience growing up in the South connects to the work you do now?

Hicks: When I was a young child, from ages 4 to 9, my family had a peach farm in Clanton, Alabama. In the story, the Anderson family has 500 acres. There’s some similarities growing up around that and then this.

I think that Brian’s vision, what he’s trying to accomplish from an interactive standpoint, [by] putting the audience in the Civil War — it’s kind of hard not to think about [the history of the Civil War and all it represents] when there are canons going off. [As a musician, to me], writing music and telling stories like this are very similar. I have instruments to paint the picture, and a message. Brian and I have a similar idea — he has a story line, [and] his instruments are cannonballs.

Clowdus: I grew up with a love/hate relationship with the South. After moving away from home, living in New York, obtaining my master’s degree at USC, all roads brought me back here. There’s nowhere else I would rather live than the Southeast. My roots are here, and my family is here. People are nice and friendlier than anywhere else.

ARTS ATL: What does working on Shenandoah mean to you right now?

Clowdus: I think that we’re currently in a civil war of sorts in our country. Putting this season together, I wanted to highlight moments in our history that show great conflict and heartbreak, and I think we can’t think about things that tear our country apart and not talk about the American Civil Car. Also, this show is the first show I acted in as a child; I played little boy Anderson. This show has always held a special place in my heart, and I’ve always known it’s a show I wanted to do.

Hicks: When I was cast, I had just finished an album in Nashville and was about to release it and tour it. In this business, you don’t know when the next detour is coming, but it’s coming. Once I wrapped my head around it, this was a magical opportunity for me to be an actor, or to start to be an actor. I’ve been in show business for 15 years. The stars have to align for there to be success. This story line, this character, the vision that Brian has — the stars have aligned for me to learn and for us, for all of us, for this to be a really successful run.