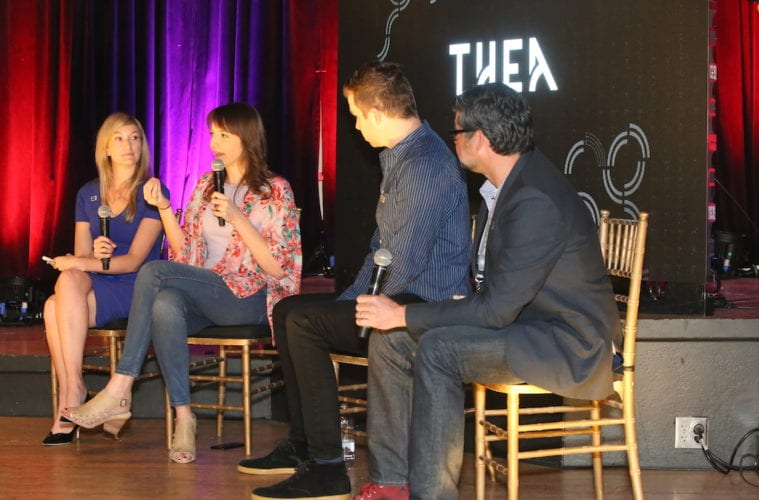 March marks the first anniversary of Atlanta’s innovative, creator-driven video streaming network, THEA. And the network is celebrating this important birthday on Sunday, March 10, at the Atlanta House at this year’s SXSW Festival, with the world premiere of the short film One Life, from Brand New World Studios.

The event is the culmination of a successful first year for THEA – a streaming service and app that technically launched in 2018 but bloomed as an idea back in 2015 with the birth of the Metro Atlanta Chamber marketing initiative ChooseATL.

“Early on, when you look at storytelling and the journey of storytelling in marketing, especially for new generations, it was all leading back to video,” says ChooseATL executive director Kate Atwood.

“So we started the journey thinking we needed this really dynamic video. We went down that path for a good while, and then we just realized that we have so many storytellers already in our community. We shouldn’t try to be the producer of what one two-minute story of Atlanta should be. We should actually maybe build and stand up the platform that powers those stories straight from the storytellers themselves. So this idea of THEA emerged. [This idea that], in this day of technology and entertainment colliding, we can actually, in a very cost-effective way, have a network, a [catalog] of dynamic content that powers the story [of Atlanta] authentically and organically from the creative community.”

THEA provides ChooseATL with a really creative, dynamic, original way to tell Atlanta’s story to the world, says Atwood, but it also serves as a type of discovery pipeline for the incredible filmmakers and content creators that the city has to offer.

“Atlanta’s become a leading market for film and TV,” she says, “so what this does is it gives us a platform for discoverability – decision-makers, producers can have a platform to go and find up-and-coming talent.”

THEA essentially acts as host to the streaming channels of some of Atlanta’s most talented and recognized creative filmmakers, storytellers and brands. In its first year alone, THEA acquired over 850 videos and 50 different channels, including an AIR Serenbe channel, an ATL Collective channel and channels for the Alliance Theatre, Dad’s Garage, Highwire Comedy, The BronzeLens Film Festival and TILA Studios.

Says Atwood, “I did not think that we could get an exclusive in the first year, so that was a big moment that again demonstrates how loyal our artists and creative community are to Atlanta.”

THEA also had a presence at the Sundance Film Festival, SXSW and Cannes.

“What we’re able to do with THEA is what no other creative community can do, and that is – you know, it costs a lot to bring 10 filmmakers somewhere, but we can show up [at a festival like Cannes] and have their work readily available for industry decision-makers at those tent-pole moments, and be the champion for that work. And the industry loves that,” Atwood says. “They have a problem with content discoverability right now, and they know that, and so they really like the value proposition that THEA brings that allows them to have a really dependable tool to find the next big documentarian or the next music act.”

The implications of that type of visibility and flexibility of distribution are even bigger in era when Oscar and Golden Globe-winning actors, filmmakers, directors and producers are choosing to distribute their projects via streaming services like Netflix and Amazon Prime Video – something not lost on Atwood.

What THEA has also done is contribute to the creation of a deeper connective tissue within Atlanta’s creative community – one that helps the city’s local filmmakers and content creators stay and build a successful career here.

And that may be an even bigger win than a level-up to Netflix — providing Atlanta’s stellar content creators, filmmakers, comedians, screenwriters, artists and producers with a path to creative sustainability, one that allows them to continue telling their story, the city’s story, for years to come.