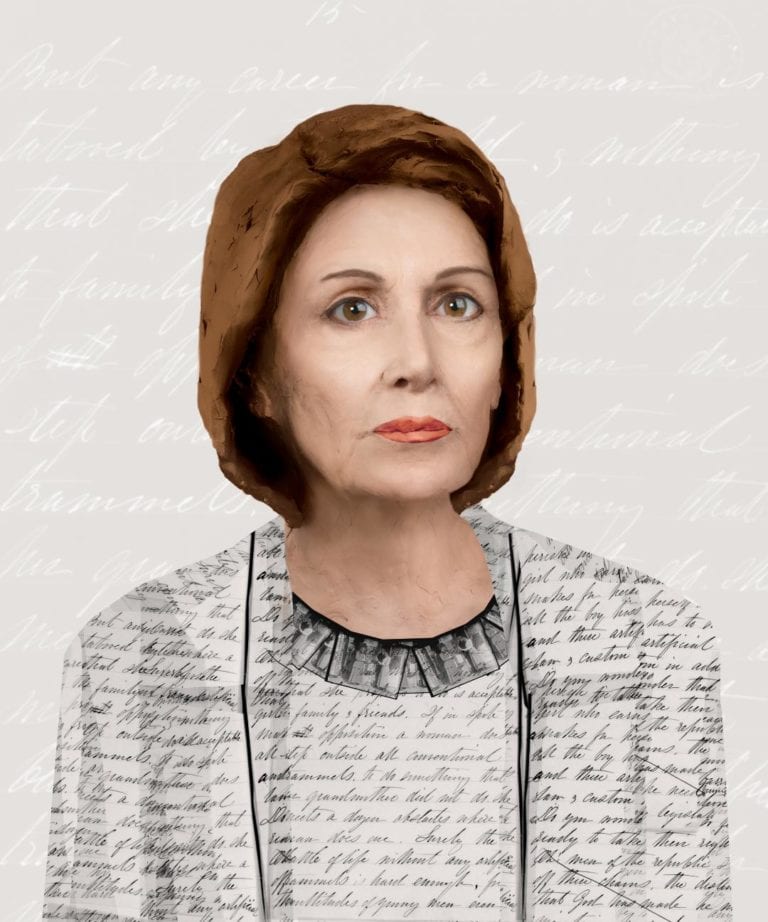 Suellen Parker's Nancy Pelosi, a 24-inch by 20-inch pigment ink print in Against the Tide at Whitespace (Courtesy of Whitespace and the artist)

The birth bicentenary of British art critic John Ruskin (1819–1900) reminds me of his thoroughly debatable — most would say outdated — belief that increasing people’s perception of beauty in the natural world and in human creations would lead to a heightened personal sensitivity that, at a certain tipping point, would lead to greater social justice.

Ruskin created a museum intended for skilled workers. It included minerals, architectural drawings and manuscript illuminations. He hoped to expand their horizons and provide conceptual tools with which to alter their condition. To some degree, it worked. At least two of those undervalued craftsmen became noted sculptors.

By sheer accident, it feels as though the current range of Atlanta exhibitions lets us once again test Ruskin’s flawed but fascinating theories. More on Ruskin later.

Parish Kohanim’s saturated-color close-up photographs of orchids, through April 7 at the Atlanta Botanical Garden, combine with the near-psychedelic effect of the tropical flora itself to immerse both eye and nose in multisensory stimulation. The impact matches, and may outdo, any installation recently seen in Atlanta.

Add to this a separate exhibition of wood-turning skill in Ed, Philip and Matt Moulthrop’s bowls (through April 27) and the outdoor steel spheres of Yayoi Kusama’s Narcissus Garden, and you have an unusual collision of art and nature. Until now, the Garden’s contribution to visual art has been the spectacular but shamelessly popularizing Imaginary Worlds floral sculptures. That ever-changing exhibition, by the way, returns for a new season May 11.

The Garden isn’t the only unexpected venue for a provocative combination of contrasts. Two very different visions of nature and history play out in paintings at galleries on Miami Circle.

In the solo show Sounding Thrush, at Alan Avery Art Company through April 13, Jennifer JL Jones’ paintings depict a version of visionary abstraction. She takes pleasure in viewers describing her garden-inspired work as life-transforming. The suggestive depth of her richly colored transmutations of floral forms encourages involvement, and viewers have responded by interacting with the poetic works.

The artists in Journeys: Paintings by Rebecca Crowell and Thaddeus Radell, at Thomas Deans Fine Art through March 11, offer a more sobering but equally involving opportunity. Crowell captures nature in vast, craggy landscapes, the polar opposite of Jones’ emotional spectrum and sunlit intimacy. Jones extracts elements of form and color from literal gardenscapes, while Crowell describes her evocative paintings as representing place — “not a place in the sense of a particular location, but more like an essence or fragment of something more universal.”

Radell draws from the classical mythology of journeys to the underworld, seen as a Christian pilgrimage in Dante’s Divine Comedy. One of his minimal portrayals of ghostly outline figures is titled Purgatorio; others are titled Hailing Charon and On the Banks of the Acheron.

Crowell and Radell share a dark poeticism, palette and a capacity for creating deeply engrossing painted surfaces that reward close attention. Regrettably, we’re in the closing days of this haunting exploration of the possibilities of rich but controlled visual imagination. Although the two are quite different in style and sensibility, I’m reminded, irresistibly, of what Ruskin made of the dazzlingly dark atmospheric effects of J.M.W. Turner.

It’s hard to know whether Ruskin would have been delighted or dismayed by the invention of and aesthetic perception in American self-taught art, but the combination of works on exhibit at Mason Fine Art (through April 6) and the High Museum of Art (Way Out There: The Art of Southern Backroads, through May 19) provides Atlantans with ample opportunity to contemplate the relationship between their own aesthetics and the grottoes, shrines and artificial paradises of the Southern working-class imagination.

The High’s show was curated by Katherine Jentleson and Gregory Harris to complement Institute 193’s new book, the previously unpublished Walks to the Paradise Garden: A Lowdown Southern Odyssey, a collaboration by the late poet Jonathan Williams with photographers Guy Mendes and Roger Manley. The show updates Williams’ photographic travel journal with an annotated map giving the status of yard installations in the American South, many of which did not survive much beyond the lifetimes of their creators.

The Mason Fine Art exhibition is based on curator Mark Karelson’s hypotheses on self-taught creativity in the late 20th and 21st centuries. This isn’t expressed by anything except the juxtaposition of artwork, so the show is open to interpretation. There is some small overlap with the High exhibition, but such artists as Purvis Young made art on almost any available surface (including a now-lost mural on the exterior wall of Karelson’s former Modern Primitive Gallery). He did not create yard installations.

I mention Lisa Tuttle’s Mock Proposal (at Poem 88 through March 30) and Suellen Parker, Sandra Lee Phipps and V. Elizabeth Turk’s Against the Tide (at Whitespace through March 23) as examples of the potent combination of aesthetically grounded beauty with hope for social transformation. Again, they aren’t quite what Ruskin had in mind, but he might have found them, to say the least, intriguing.

Tuttle’s lovely Photoshop addition of gossamer white flags of surrender to the South’s surviving Confederate monuments is a poignant and pointed but modest proposal that suggests there’s something peculiarly paradoxical about the dominant position of statuary meant to memorialize a defeat.

The Whitespace show presents alternative ways of understanding female bodies and female heroism and deserves as much analysis and publicity as possible. The stunning beauty of Phipps’ color photographs in Lessons in Survival, Turk’s photograms and Parker’s God Has Given You Minds, photos of her portrait sculptures of contemporary female political figures clad in the text of Elizabeth Cady Stanton’s influential suffragist speech, warrant extended commentary.

Finally, we return to Ruskin. My harping on him is idiosyncratic but less beside the point than it may seem. For proof, I refer you to Philip Hoare’s essay “John Ruskin: A Prophet for Our Troubled Times.”  It’s a concise glimpse of why a Victorian theorist ultimately driven to mental illness by the contradictions of his age might make sense of art in the era of environmental crisis and digital reproduction.