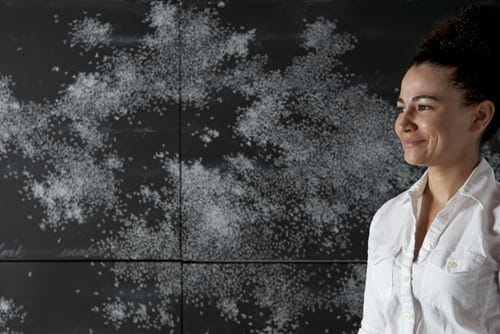 Two years after being part of ArtsATL's "30 Under 30," Collins received the Hudgens Prize.

Editor’s note: Our “30 Under 30” series from 2013 profiled emerging artists under the age of 30. At the time, Bethany Collins had just received her M.F.A. from Georgia State University and was already making waves on the Atlanta arts scene. She now splits her time between Atlanta and Chicago and has had solo exhibitions in New York City, Miami and Atlanta. In 2015, she was awarded the Hudgens Prize.

Bethany Collins makes art about herself. Or rather, art about race and identity through a very personal lens. Never strident or didactic, her approach is as subtle as the subtle forms of racism she often encounters. She simply holds up a metaphorical mirror to society to expose its assumptions about race.

Collins is of mixed race: her father is black, her mother white. Like many mixed-race people, she identifies as black because that is how she is perceived. She grew up in Montgomery, Alabama, where she was always assumed to be black. “In Atlanta, people aren’t as sure,” she says. “There are more possibilities” of ethnicity. Collins earned a B.A. from the University of Alabama in 2007 and received an M.F.A. from Georgia State University in 2012. Since then, she has landed most of the opportunities available to Atlanta artists: a Walthall Artist Fellowship, a Hambidge residency and a Dashboard Co-op affiliation. And she’s about to embark on a prestigious year-long residency in New York that promises a major career boost (the official announcement will come August 20).

The 29-year-old artist’s best-known works are from her White Noise series, which she began in response to class critiques in graduate school. She was the only person of color in the program. “Conversations about my work in that setting were awkward — well-meaning but always awkward,” Collins says.

At the time, she was making works from paper bags that referred to the “brown paper bag test,” the self-imposed standard once used by African Americans to determine acceptable skin tones. Her peers didn’t understand it, and she didn’t know how to process some of the feedback, such as, “Don’t you think your work is a little elitist?” (as in exclusionary) or “Maybe you should make it into a slave ship” so that viewers could “get it.”

Collins began using the feedback itself — the “white noise” — as material for her work, “to break the language apart.” On wooden panels covered with blackboard paint, she writes out the statements in chalk-like white charcoal (or actual chalk, for temporary installations), which she then obfuscates by partial erasure and overlays with seemingly random clusters of letters. The titles of her paintings are always the phrase they contain, so viewers can know what the illegible text says even if they can’t decipher its meaning or pick it out in the morass.

The free-floating letters make the same statement as the background, which the artist neatly spells out, over and over, flopping the letters, letting them drift apart, overlap or circle around one another. In the nebulous clusters, viewers often see maps, clouds or constellations. Bethany Collins’ “Well, They Just Don’t Match Up II” (2013), in chalk and charcoal on chalkboard

“I like that people project what they want onto them,” Collins says, “because that’s what people do to me.”

The classroom associations directed her choice of materials. She likens the act of repetition to the classic schoolroom punishment of repeatedly writing a statement on a blackboard. “It allows me to meditate on the statement because I never have a good response to those remarks in the moment.”

She then began drawing phrases from her personal life. She takes ownership of the offensive words and uses them to poke fun at the speakers’ cluelessness, though their comments elicit stunned disbelief more than chuckling. The back stories of the works are compelling, and Collins struggles with how much narrative to give away because people often start to focus on the personal revelation more than on the object.

With the small easel-mounted piece I Just Don’t See Race in Your Work, for example, we at least know race is a factor. A work titled Unrelated, however, leaves the viewer wondering. Collins is often intentionally ambiguous. Her work conveys a sense of frustration around communication, something she recently realized might be related to her attempts to communicate with her mother, who lost her hearing when Collins was in her teens.

Unrelated is based on the caption of a photograph of the artist and her family that ran in the Montgomery newspaper circa 1994. A reporter did a sidewalk interview with them as they were leaving a volunteer effort. “The next day in the paper, the caption read ‘James R. Collins . . . and Connie Collins, unrelated.’” They were never asked about their relationship, the artist says. “It was just assumed that my parents weren’t a couple, even though we were all holding hands and my sister and I look like them.”

Other works are inspired by current events, such as celebrity chef Paula Deen’s train wreck of an apology for past racial remarks and a Walmart visit that went awry for a white father and his three biracial daughters. Collins feels that viewers more easily can comprehend her works by using widely reported phrases such as “black as that board” and “well, they just don’t match up.” She tries to complete her works in one session, or perhaps over a weekend, depending on their size. She writes until her hand hurts and stays close to the surface to avoid an overall view of the composition, intentionally looking away if she has to leave and reenter the studio.

She works organically, without concern for the overall composition. The process is cathartic. In a sense, scrambling the words and letters helps her to unscramble her thoughts about the loaded comments, to make sense of the nonsense. Inevitable comparisons to Gary Simmons’ chalkboard paintings are one of the reasons she consciously avoids making composed, “pretty” works.

Collins has dabbled in color — blue, yellow, brown — but feels that those pieces aren’t as strong. In them, she uses phrases that black people have said to her. “It’s the same language but coming from a different place,” she says.

They both reveal an attempt to label her, she feels, to find out where her allegiances lie. Thick but Not Thick Enough, for example, is about her hair being thick enough to hold a braid but “not to do all the real stuff.”

Erasure comes up in other of her works, a theme perhaps stemming from a sense of being negated by both races. The pieces in her Webster’s New World Dictionary series are minimalist in nature, consisting of a few lines of text at the center of 30-by-22-inch sheets of white paper (American Master’s paper, an intentional choice).

She selects terms that are used to describe degrees of blackness or of being mixed race, such as beige, gray and half-and-half. The text — photo transfers of enlarged dictionary entries — is mostly illegible because of her rigorous rubbing that has chewed into the surface.

Collins’ Half-breed, 1951, on view in the High Museum of Art’s Drawing Inside the Perimeter, is completely obliterated, though she usually leaves a key fragment of text untouched — “confused, muddled” for the word “mixed,” for example.

“You should be able to figure out what the word is by its definition, but you can’t,” she says — again thwarting assumptions and communication. Bethany Collins in her studio

During a studio visit last month, Collins was working on a multipanel piece for the dictionary series. Each panel contains a definition of “gray” from successive editions: 1951, 1953, 1968, 1970 and 1986. An early version, for example, partly defines “gray” as “designating an urban area that is deteriorating,” a usage that is removed in later editions.

“It’s interesting to see how language changes over time,” the artist says. “It’s similar to identity in that it’s not fixed.”

She has also been making black-and-white photographs that are more conceptual in nature. After creating a chalkboard piece, she erases the text with old-school felt erasers, which then “contain” the written sentiment. Clapping the erasers together, she photographs the clouds of dust.

“It’s kind of a way to let the language go,” she explains.

Collins is undertaking her first collaboration, with artist and Zuckerman Museum Director Justin Rabideau, for the upcoming Decatur Book Festival. Titled Too White to Be Black, their project is based on a community in Appalachian Ohio whose members self-identify as African American even though they look white. The story raises a multitude of questions about identity, history, “passing,” the “one-drop rule” and race relations.

Other works in progress involve photographs of single clouds, taken in Alabama and Georgia. Collins says they’re about “a desire to get out of my own body, to address race, but in a broader way.” While addressing race outside the body, or outside lived experience, poses certain challenges, Collins’ knack for nuance promises to yield thought-provoking results.