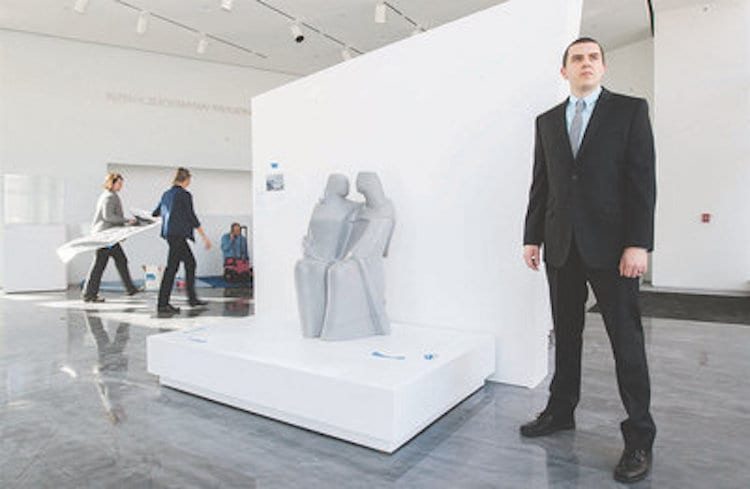 Rabideau was a beloved member of Atlanta’s arts community, and his loss is felt deeply at Kennesaw State University, where he worked closely with students, faculty, staff and artists as museum director of KSU’s Bernard A. Zuckerman Museum of Art. Rabideau worked as a collections assistant and preparator at Everson Museum of Art in Syracuse, New York (2007–09), and as an exhibit technician at West Palm Beach’s Flagler Museum (2009–11). Education remained important to him, and he also worked as an adjunct professor at Syracuse’s Cazenovia College and Palm Beach State College.

He moved to the metro Atlanta  in 2011 and became director of the Zuckerman Museum in 2012, while it was still being built. While at Zuckerman, he oversaw 45 exhibitions, including student and faculty shows as well as exhibitions by national artists. This past spring, the museum was awarded the 2018 Southeastern Museum Excellence in Exhibitions Competition (gold) for Tomashi Jackson: Interstate Love Song. Rabideau was consistently devoted to showing the work of Atlanta artists alongside artists and artistic movements happening on a national and global level.

In a March 2018 interview, the arts website Voyage Atlanta asked Rabideau, “What is success for you?”

“I think about the individuals whose lives have been impacted by the experiences they’ve had at the museum,” he answered. “That to me is real success. . . .  We’ve had student workers that have gone on to work at places like the High, MOCA GA, MODA, Fernbank and the Center for Puppetry Arts. . . . Helping others achieve their goals in life is truly a definition of success in my book.”

The Zuckerman position had its ups and downs. The museum’s opening was clouded by controversy when KSU president Daniel Papp removed a potentially controversial work, Walk in the Valley, that referenced lynching. The 2016 Art AIDS America exhibition, which showed work dealing frankly with issues of sexuality and HIV, was the source of some controversy when a series of articles, the second by State Representatives Earl Ehrhart (R-Powder Springs) and Ed Setzler (R-Acworth), and State Senator Lindsey Tippins (R-Marietta), criticized the institution for showing such “sickening”  work. Through it all, Rabideau remained true to his vision and the artistic and educational mission of the museum, acting as a clear and articulate spokesman for its goals and intentions. “We believe that reinvigorating the dialogue about HIV/AIDS will help to educate our communities that we serve and help combat the spread of this disease,” he told Burnaway about the Art AIDS America controversy. ArtsATL critic Matthew Terrell called that show “one of the most engaging exhibitions to come to metro Atlanta in years,” and ArtsATL subsequently selected the Zuckerman as the inaugural recipient of our 2017 Luminary Award for Social Discourse for its role in sparking important community dialogues.

As an artist, Rabideau showed his work in printmaking and sculpture in Atlanta, throughout the Southeast and beyond, collaborating with a long list of prominent Atlanta artists on everything from installation to dance performance. His Atlanta work included solo and group shows at Marcia Wood, Mammal Gallery, Kibbee Gallery, Gallery 112, Barbara Archer Gallery, MINT, the Goat Farm Arts Center, WonderRoot, W Hotel, Dashboard Co-op and more.

The last update to Rabideau’s Facebook page, on October 15, was a famous and oft-repeated quote in verse by Georgia folk artist Howard Finster. In some ways, the quote could be used to describe Rabideau’s own assemblages and sculptures and his aspirations to create a sense of engagement and unity through his work as an educator, curator and artist: “I took the pieces you threw away and put them together by night and day. Washed by rain, dried by sun, a million pieces all in one.”