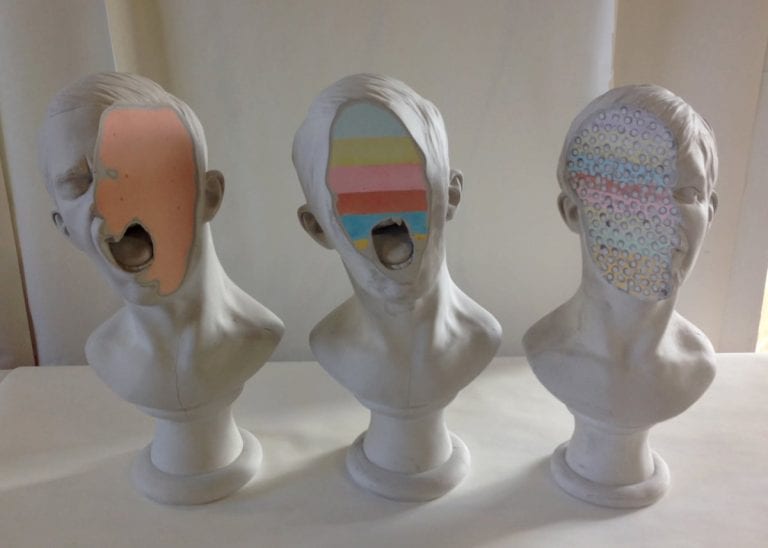 It has been a year of intense discourse and self-reflection in Atlanta’s pulsing visual arts community. Recurring themes of self-identity, in relation to our race, gender and location seemed to be top of mind. With the loss of such great Southern perspectives including Thornton Dial Sr. and William Christenberry, one can’t help but speculate on whose perspectives will come to define us next. Our commercial galleries continue to hold strong, despite the odds, and our college, university and arts institutions continued to contribute more than their fair share, while also initiating important dialogues.

As the year comes to a close, we can’t help but reflect on the year’s most notable exhibitions. Here, our visual arts critics weigh in on the most memorable shows of 2016.

Walker Evans: Depth of Field at the High Museum, June 11-September 11, 2016, reminded us of the value of seeing deeply. Depth of Field, a chronological survey of the influential 20th-century lyric photographer’s work, delivered one of the most comprehensive collections of Evans’ 50-year career, with over 120 images in black-and-white and color spanning the ’20s through the ’70s. Among them are European-influenced images made on the streets of New York in the ’20s, later covert images of strangers on the New York City subway system, decaying antebellum architecture, meditations on signs and Polaroid photography, and, most stirringly, the iconic 1936 portraits of Alabama tenant farmers made in collaboration with writer James Agee on the book Let Us Now Praise Famous Men (1941).

Nominally about tenant farming in the Depression-era American South, Agee and Evans delivered a classic on the human condition. Evans’ simple, elegant photographs in luminous silvers, which formed Book I of Famous Men in wordless totality, are arguably the best in the exhibition. Members of the three families about whom Agee wrote, pose for the camera, front and center, radiant and simply as they are, but infused with the mysterious beauty with which Evans ennobled and exalted his subjects.

Evans elevated portraiture to the realm of art; these now-distant men and women look back at Walker Evans, and at us, as through time itself, delivering an object lesson in Evans’ credo (in wall text at the exhibition): “Stare. It is the way to educate your eye . . . . Stare, pry, listen, eavesdrop. Die knowing something. You are not here long.” (Full review.) — Donna Mintz

Faulkner and Silver. In January, Susan Bridges of Whitespace Gallery invited William Faulkner scholar Tom McHaney to join Mimi Hart Silver in the gallery for a discussion of Territories/Kingdoms, Silver’s show of mysterious and memory-laden painting and drawing. McHaney read from “The Bear,” the best-known chapter at the heart of William Faulkner’s masterpiece, Go Down, Moses, a dense and beautifully wrought novel that addresses the big questions of Faulkner’s life — inheritance, of land, for sure, but also of ancestral piety and the sins of our fathers. It is a novel about truth and what is knowable, about time and timelessness, and ultimately, about the complex relationship between the past and the present — and a perfect fit for Silver’s work. Like Faulkner, the artist traditionally deals with issues of Southern identity and generational memory, and this body of work seemed a particular match for the mystery and timelessness of Faulkner’s words.

Memory, both personal and collective, shapes our personal narratives and storytelling, our lives and our art-making. In a koan-like aphorism (from his novel Light in August) Faulkner draws a distinction between memory and knowing: “Memory believes before knowing remembers. Believes longer than recollects, longer than knowing even wonders.” If memory is a collection of experiences and knowing is our translation of them, the meeting of McHaney and Silver over the words and ideas in Faulkner’s writing reminded of the ways in which the creative act may be an effort to understand the past and ourselves — and, even when it hurts, to hold onto it.

Bridges’ Late Afternoon Salon, in the style of the old literary salon, was an enriching, educational hybridization and a downright fun way to spend a cold winter afternoon. Let’s hope for more of them in 2017. (Full review) — DM

The Ceramix: Georgia’s Creative Claymakers exhibition that Hope Cohn curated at Hartsfield-Jackson Atlanta International Airport stands out as one of the most important, most often seen, most overlooked exhibitions of the year. Although one could also cite Rick Berman’s ambitious historical survey of Southern ceramics in Watkinsville (which I did not see), the airport show brought a host of living Georgia ceramists (including Berman) to the attention of thousands of hurrying air passengers, and set the context for them, for those passersby who had the time to stop and read. (Full review.) — Jerry Cullum

Arturo Lindsay’s semi-retrospective at Hammonds House was one of the highlights of a multifaceted year, bringing to the fore a body of work that unites African Diaspora and Latino/a or Latinx cultural influences, but predominantly African Diaspora, whether in pure Panamanian form or in conjunction with a poem by African-American poet Ntozake Shange. From its homages to the most recent casualties of America’s racial and gender conflicts to its portraiture of escaped slaves who lived free lives in the open, Lindsay’s body of work presented a much-needed historical and aesthetic education.  (Full review.) — JC

Jill Frank’s solo exhibition at the Museum of Contemporary Art of Georgia was an unconventional yet striking show of portraits. Frank, a visual artist working primarily with photography who also teaches at Georgia State University (GSU), rendered her subjects’ informal activities — young adults performing rites of passage for the most part — with a formalism that injected a grandeur to their acts. The result was a series of large-format portraits that invited us to rethink the way we look at trivial behaviors — think shotgunning a beer — and elevated the conversation on how to perceive young adults’ identity formation. (Artist interview here.) — Virginie Kippelen

Nature & Politics by German photographer Thomas Struth is a not-to-be-missed exhibit (currently on view at the High until January 8.) His large-scale prints deal with technology, engineering labs and constructed landscape and, ironically, seem to have little to do with nature and politics. But don’t be fooled. Struth’s work is highly intellectually charged and his objective, realistic approach is tempered with lightheartedness and a sense of humor on how to perceive the world we live in. The details he captures in every frame are astonishing. — VK

Vesna Pavlović’s Falls and Folds at Whitespace is a favorite from 2016. In retrospect, it seems like a foregone conclusion given that I studied art history and was really into the baroque, but it was the opposite. When I first walked into the gallery I thought it was a little sterile and easy — artist appropriates old slides and they look good, but what’s the point? As I spent time with the exhibition, I understood the ideas that Pavlović was smartly engaging. I was a convert: Pavlović was making a deeper point about the nature of representation and its limits. (Full review.) — Rebecca Brantley

Also at Whitespace, Bojana Ginn’s Phygital Muse stands out. Her small but impactful show deals with ideas that really interest me. Her investigation of how physical art is affected by digital technology is timely and important. Atlanta benefits from Ginn’s contribution and her deft exploration of up-to-the-minute ideas and materials. (Full review.) — RB

Finally, it’s worth noting that there were some stellar works in the troubled ATLBNL that deserve recognition: Stacy Lynn Waddell’s and Cosmo Whyte’s installations struck me as powerful and poetic explorations of one of the most — if not the most — salient issues of this year: Black identity in the United States. Waddell’s elegant works were elegiac and mournful; Whyte’s installation connected the past to the present. And, finally, Phillip Andrew Lewis’ “Distribution in Red” (an old KFC sign transformed into a pseudo-Minimalist sculpture) dealt with nuanced ideas about Southernness in simple but potent visual language. Rarely is humor used so well in visual art. (Full review.) — RB