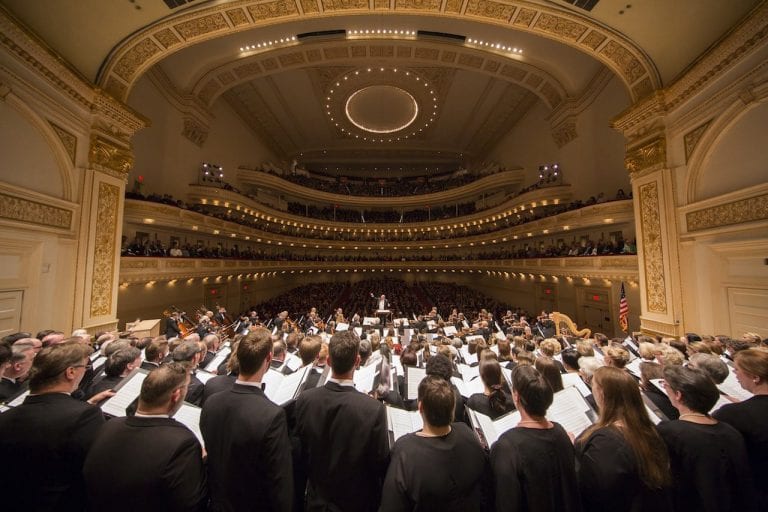 The highlight of the ASO's year was the Carnegie Hall tribute to the late Robert Shaw. (Photo by Chris Lee)

The Year in Review: ASO, The Atlanta Opera reach toward financial and artistic stability

For the Atlanta Symphony Orchestra, the first half of 2016 was most distinctively marked by the culmination of its Robert Shaw Centennial, celebrating the late longtime music director who was responsible for turning the ASO into a full-time professional orchestra and recording multiple Grammy Award-winning albums with the orchestra and its chorus. Its apogee took place on what would have been Shaw’s 100th birthday, April 30, in New York, where music director Robert Spano led the ASO and Chorus in Johannes Brahms’ Ein deutsches Requiem and a new work, Jonathan Leshnoff’s Zohar to a sold-out audience at Carnegie Hall.

In the fall, the ASO kicked off its new 2016-17 subscription season in a grand way. Joshua Bell appeared in a one-night-only special, performing Tchaikovsky’s Violin Concerto with music director Robert Spano leading the orchestra in the all-Tchaikovsky program. The official opening week of the subscription series featured a longtime favorite and friend of the orchestra, pianist Garrick Ohlsson.

Other notable highlights included the ASO debut of Atlanta-based mezzo-soprano Jamie Barton, performing Edward Elgar’s Sea Pictures, led by Spano, and paired on the same concert with Vaughan Williams’ A Sea Symphony, featuring the mighty ASO Chorus. Principal guest conductor Donald Runnicles made his first appearance of the new season in a splendid concert of music by Takemitsu and Mahler. Guest conductor Laura Jackson, who had served with the ASO as assistant conductor and American Conducting Fellow from 2004 to 2007, returned to lead a successful program at the beginning of December.

On the business side, the ASO’s new calendar year began with a new executive director, Jennifer Barlament, former general manager of The Cleveland Orchestra. Running on firmer financial ground, in mid-year the ASO reported its second annual budget surplus in a row. Then at the end of October, two years ahead of schedule, the ASO announced that it had met and exceeded a fund-raising milestone: its goal of $25 million for the Musicians’ Endowment, to underwrite the positions of 11 musicians in order to restore its total roster to 88 players.

Notably, two ASO-related documentary films had debut screenings in 2016: Robert Shaw: Man of Many Voices, a biographical documentary about the late choral music legend and former Atlanta Symphony Orchestra director of music, and Concerto, a film about family dysfunction which focuses on the lives of ASO principal cellist Christopher Rex and his brother, violinist Charles Rex.

The Atlanta Opera continued to blossom and solidify its foundations under the leadership of general and artistic director Tomer Zvulun and music director Arthur Fagen.

The company’s main-stage productions at the Cobb Energy Performing Arts Centre included Gilbert and Sullivan’s The Pirates of Penzance and Charles Gounod’s Romeo and Juliet in the first half of the year; W.A. Mozart’s The Abduction From the Seraglio and Kevin Puts’ Pulitzer Prize-winning Silent Night — a moving, contemporary opera about the World War I Christmas truce.

The company announced expanded offerings for its 2016-17 season, including four main-stage productions and two innovative “Discovery Series” chamber operas. In mid-year, the company received a $600,000 grant from the Molly Blank Fund and late in the year reached a new three-year collective bargaining agreement with its orchestra musicians.

Spivey Hall, noted for its world-class acoustics and exceptional programming, announced it is raising funds to search for and acquire another new Steinway concert grand, to be christened “Robert,” as a companion to its premier “Clara” Hamburg Steinway. The New York Steinway “Walter” has been relocated to service in the choral rehearsal room of the music building next door, where it has also been used for concerts of an intimate size. Its companion “Emilie” remains one of the pianos available for concerts in Spivey Hall itself. Spivey Hall hopes to raise $225,000 in the search for and acquisition of “Robert.”

Another esteemed venue of an entirely different kind, the venerated Atlanta jazz club Churchill Grounds, long located next to the Fox Theatre, closed its doors in July, but rather quickly found a new home on the south side of Grant Park, and plans to reopen there next fall.

William Ransom, artistic director of the Emory Chamber Music Society of Atlanta, was selected as one of Musical America’s top 30 Professionals of the Year in classical music. Ransom is the third Atlantan in a row to make the list, following Robert Spano and Lois Reitzes.

In September, Ransom announced that the chamber society had at last met a $1 million challenge grant from The Abraham J. and Phyllis Katz Foundation, resulting in the creation of the Rebecca Katz-Doft Chamber Music Endowment, its purpose is to fund in perpetuity the presence of a string quartet-in-residence at Emory University.

The current quartet-in-residence at Emory, the Vega String Quartet, got a new first violinist during the summer, Elizabeth Fayette, replacing outgoing Domenic Salerni, who moved to Philadelphia to become first violinist of the Dalí Quartet. The Peachtree String Quartet also made a personnel change, with Yiyin Li replacing Yang-Yoon Kim as the group’s violist, and began to expand the scope of its concerts beyond Atlanta to Georgia cities like Jasper and Albany.

The Atlanta Chamber Players once again hosted the Rapido! Composition Contest, with its 2016 national finals taking place in January. Contest winner Mark Buller, of Houston, returned to Atlanta in late September for ACP’s world premiere of his Motion Studies — the completed Rapido!-commissioned work based upon his six-minute contest-winning entry, Regressive Variations.

Eyedrum also brought forth a new Composer’s Concert Series late in the year, curated by percussionist-composer Olivia Kieffer. By the end of the year, the series had presented four concerts by area composers: Nicole and Brian Chamberlain, Paul Stevens, Tim Crump and Jeff Crompton, and Cody Brookshire.

In mid-October, Stallings and her venerable glo movement artists collaborated with contemporary ensemble Sonic Generator in an outdoor performance in the midst of Sol LeWitt’s massive public sculpture, “54 Columns.” Two days earlier, contemporary ensemble Bent Frequency amassed 100 performers in another somewhat public space, the basement of a southwest Downtown parking garage, for the U.S. premiere of Michael Pisaro ‘s A wave and waves, as part of the city’s “ELEVATE: Microcosm” events.

In the classical-rock crossover realm, at the end of October, Macon violinist Robert McDuffie headlined a concert of American music featuring the new Concerto for Violin, Rock Band, and String Orchestra by Mike Mills — a founding member of the legendary alternative rock band R.E.M. — at Emory University’s Schwartz Center for Performing Arts. Noted prominently in that concert’s program booklet was the pending retirement of Bob McKay, who has been the Schwartz Center’s managing director ever since it opened in 2003. McKay retires in January.