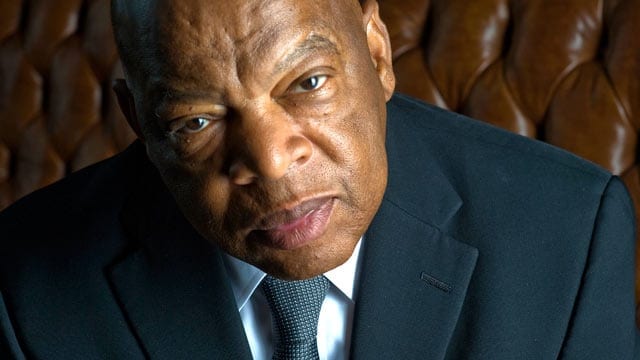 It was an incredibly memorable and commendable year in Atlanta’s literary scene. Atlanta writers were celebrated and lauded far and wide — earning Guggenheim Fellowships, National Book Awards and entry into the Academy of American Poets, to name a few things. Here, we accrue some of the highlights from throughout this year’s book coverage.

Representative John Lewis won the National Book Award — “This is unbelievable,” he said while accepting his award for Young People’s Literature for his collaboration with Andrew Aydin and illustrator Nate Powell on the graphic novel March: Book Three. “. . . I grew up in rural Alabama, very poor, very few books in our home. I remember in 1956, when I was 16 years old, going to the public library to get library cards, and we were told the library was for whites only and not for coloreds. And to come here and receive this honor, it’s too much.” (Full news release here.)

The release of Molly Brodak’s Bandit — One of Atlanta’s own earned great critical acclaim this year with her memoir, Bandit. “It’s easy, given these facts, to assume Bandit is an untypical story, a story of uncommon scope and drama,” said ArtsATL’s critic, Carrie Lorig, in her review of the book. “But what is unorthodox about this story and its circumstances is also vividly fixed by its terrifyingly traditional foundation: Bandit is the very American and not unusual story of a person or a woman who must reckon with how a man altered her life without her permission and, seemingly, without much thought for her.” (Carrie Lorig’s full review.)

A Thousand Naked Strangers  — Another Atlantan’s memoir piqued our interest this year — Kevin Hazzard’s firsthand account of working in the city as a paramedic. “Despite the disturbing nature of the scenes in this book, Hazzard’s atmospheric writing and instinct for the comical creates an entertaining read,” says ArtsATL critic Sarah Sacha Dollacker. “Desensitizing tragedy with a dose of humor is as old as storytelling, but Hazzard’s use of comedy is particularly important here. The direct writing style that Hazzard laces with satire balances the weight of his subject, allowing the reader to delve into the darkness with him.” (Sarah Sacha Dollacker’s full review.)

A Lillian Smith Reader  —  UGA Press commemorated the Georgia legend this year by releasing a compendium of her greatest works, the result of which was an incredible tribute to Smith’s brazen legacy. “This collection of her extensive writings, handily, comes with a lengthy chronology of her significant life events as a preface. Smith lived richly and fully, seemingly imbuing every interaction with meaning; little escaped her observant eye.” (Candice Dyer’s full review.)

Natasha Trethewey, Academy of American Poets Fellowship — In early September it was announced that former U.S. Poet Laureate and Emory Professor Natasha Trethewey had been awarded the 2016 Academy of American Poets Fellowship for distinguished poetic achievement. The annual fellowship — the first of its kind in the United States — was established in 1946 and is given in memory of Pulitzer Prize-winning poet James Ingram Merrill. (Full news release here.)

Margo Jefferson in conversation at the Atlanta History Center — In August the National Book Critics Circle Award winner and Pulitzer Prize-winning critic Margo Jefferson came to the Atlanta History Center to discuss her memoir, Negroland. ArtsATL Executive Editor Laura Relyea interviewed the distinguished author in advance of that discussion. “That was very difficult, it wasn’t only personal in terms of myself or my family, it was a social, racial and ideology. In those decades we stayed private. Really, it was a philosophy that had come down historically through generations of Black people, over a couple of centuries. With so much racism, the body of stereotype and libel is so huge. We had to be excellent and scrupulous and therefore very guarded about revealing any lapse or failing — however normally human it is — that could be interpreted as a sign of inferiority.” (Full author interview here.)

Blood, Bone and Marrow: A Biography of Harry Crews — The notorious “wild man” of literature had his reputation for his tenacious spirit and tireless work ethic secured with the release of Ted Geltner’s biography, Blood, Bone and Marrow. “‘I showed up to interview him once, and he had a black eye,” said the author. The title derives from the elements Crews vehemently argued were essential for successful writing. (Crime novelist Michael Connelly wrote the foreword.) “People from his wild days would show up, and something weird was always happening with Harry.” (Read Candice Dyer’s full review here.)

The 25th year of the Book Festival of the MJCCA — The city’s longest-running book festival, hosted by the Marcus Jewish Community Center of Atlanta, rang in its quarter-century anniversary this year with a star-studded lineup and an array of incredible author events, including talks from Jonathan Safran Foer, Kenny Loggins, Yael Dayan and more. (Read our full preview with highlights from the festival here.)