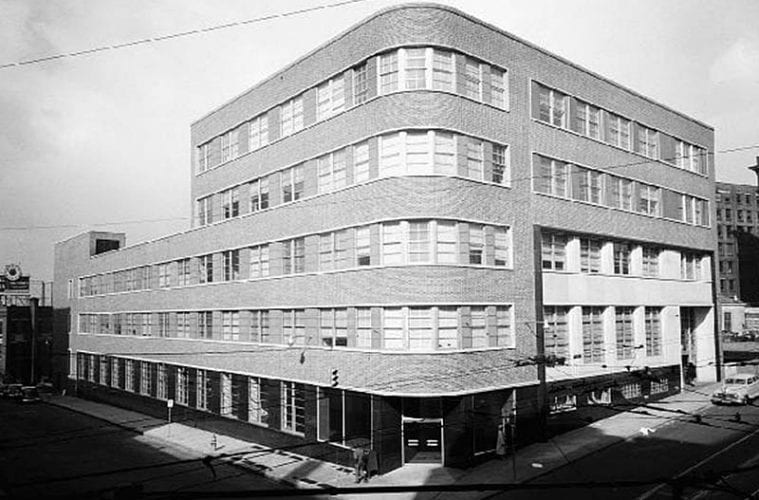 Often, when people conceive the quintessential “historic” structure in their mind, it is a grandiose classical composition — a monolith with stone columns topped by pediments and maybe even a dome.

Of course, as Modern buildings such as the Equitable Building age, the perception of what is worth preserving is shifting. Still, classicism dominates the dialogue of historic preservation and adaptive reuse. It’s unsurprising, as the monolithic monuments of bygone eras serve as a foil to much of today’s architecture, exuding history through their seeming steadfast permanency.

In Atlanta, it doesn’t hurt that classical buildings are few and far between, given the city’s penchant for demolition.

The ubiquity of Classical forms in major American cities is a testament to the era our cities grew up in. In many Western societies, prominent buildings dating from the 1800s and early 1900s owe their influence to the École des Beaux-Arts in France.

Espousing Vitruvian principles and Greco-Roman classical formalism, the teachings of the school pervaded much of international architecture before World War I. Atlanta’s surviving building stock from before the First World War stands as a testament to the trend . . . for as long as we’ll allow it.

With the acceleration of technological advancements — especially in the realm of transportation — during the interwar years, styles of architecture began to evolve to mimic changing societal realities. Leaving the Beaux-Arts tradition of classicism, both art and architecture embraced styles including Futurism, Expressionism and Art Deco — all subsets of the blanket style of Modernism.

While the Second World War limited construction in many cities, including Atlanta, after 1945, the modern building boom was in full swing.

The evolution of the style Art Moderne, alternatively known as Streamline Moderne, emerged from the flamboyance and geometric expression of Art Deco — the style most widely associated with Miami Beach — coupled with austerity at the end of the Great Depression and during the war.

Employing curvaceous forms and strong horizontals, the style embraced the modernization of society and was a total rejection of classicism.

When Atlanta emerged from the war-induced development doldrums, architects in the city embraced the global architecture trends. Embodying the spirit, in 1947, The Atlanta Constitution — one of the eminent newspapers in the city — constructed a new headquarters in the heart of downtown.

The building was designed by Atlanta-based Robert and Company, who also did projects including Grady Hospital and the Atlanta Civic Center — another building currently slated for demolition. The paper relocated operations across the street from a classical building, which housed the publication for more than five decades; the contrast was hardly an accident, portraying the paper as cutting-edge.

Design of the building was both dictated by, and a manifestation of, the changing needs of journalists in the booming post-war city; the building was heralded as “symbolic of Georgia’s progress.”

Functionally, the building was located adjacent to the railroad lines running in the gulch to the north, allowing for shipments of the large paper rolls for printing to be easily delivered. The building was structured to accommodate large state-of-the-art printing presses.

Aesthetically, the form exuded the function within. A 72-foot-long bas-relief sculpture by Julian Harris entitled “History of the Press” adorned the facade along Forsyth Street. Large windows provided views of the presses at work in the basement to passersby on the street.

Located just blocks from the two main train stations of the city, the style also alluded to the new age of transportation, with an emphasis on trains, personal automobiles, etc. which boomed following World War II. The rounded corner of the building facing Alabama and Forsyth streets, coupled with horizontal brick banding made the building a modern marvel.

When completed, it was the most modern of all the newspaper buildings in the city, positioning the Constitution as one of the eminent news sources in Atlanta.

Ironically, the building only served as the home of the newspaper for six years.

Following its merger with the rival Journal, the paper outgrew its space and relocated. Georgia Power took over the building for a few years, but quickly the core of the city sunk into decline with the rise of the suburbs. The building was largely abandoned a mere 25 years after opening. 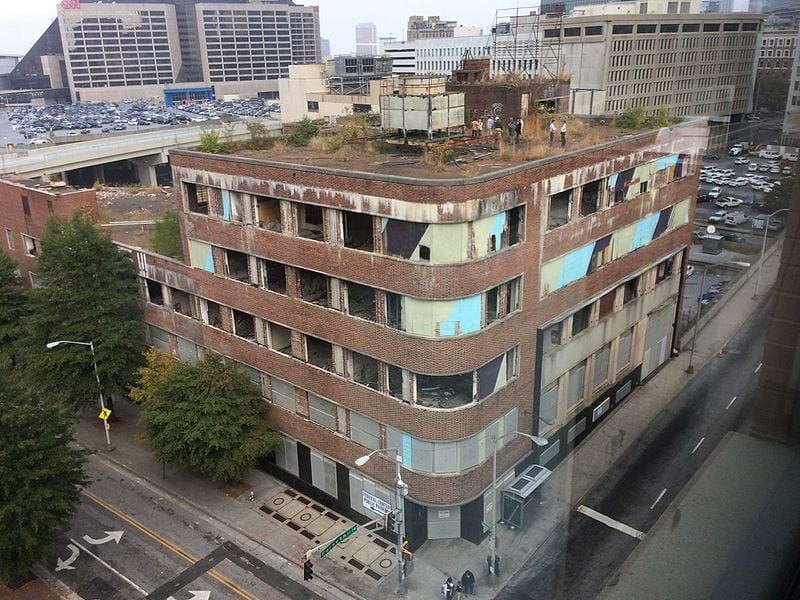 For more than half of the building’s life it has stood abandoned and deteriorating, becoming an eyesore in an already downtrodden part of town. In the 1970s, Atlanta’s grand rail stations were demolished, and as life left the neighborhood, the Atlanta Constitution Building languished.

In 1972, the bas-relief was removed from the facade. Some time after, a tree took root on the roof and still stands today: a testament to the structural integrity of the facility.

While much of the historic neighborhood which existed when it was built is gone today — the construction of the Five Points MARTA station and various redevelopments of today’s Underground Atlanta scrubbed much of the historic fabric in the area — the building is still an important part of the story of what once was the heart of the city.

Eligible for listing on the National Register of Historic Places, the building stands neglected and unprotected — both from the ravages of time and the threat of demolition. As a testament to its importance to the city, the building has been included on the Atlanta Preservation Center’s list of most endangered buildings for three years.

Plans to revitalize the building have fallen flat in the past, though recently, Invest Atlanta — the city’s real estate arm and current owner of the facility — has released a request for proposals seeking use of the site. While the RFP originally specified that the structure be preserved and adapted to a new use, a change was made in November to the document, opening the door for demolition.

When asked about the modification, Matt Fogt with Invest Atlanta said, “We remain excited about opportunities to redevelop 143 Alabama Street and the potential it has for the Downtown area. As stated in both the RFP and the newly issued addendum on Invest Atlanta’s website, the preferred redevelopment approach is to renovate the building for commercial or residential reuse. The addendum posted last week is merely an addition to the process that allows for other compelling redevelopment ideas to be considered.”

The statement is little consolation for those who feel the building is too important to lose.

As part of the historic fabric of Alabama Street, the adaptive reuse of the building is about preserving a larger legacy of the neighborhood which was undermined with the demolition of dozens of historically significant structures for the Five Points MARTA station. And with further destruction in the area still a distinct possibility, depending on what plans materialize for the “redevelopment” of Underground Atlanta, the preservation of the Atlanta Constitution Building is all the more important.

While the area deserves to be returned to greater use, it is important that it is not scrubbed clean of its deep-seated history as one of the original streets of Atlanta, the core of our city. The Atlanta Constitution Building should serve as the western anchor for the reinvigoration of the area, and could be a shining example of Atlanta’s commitment to embracing its history.