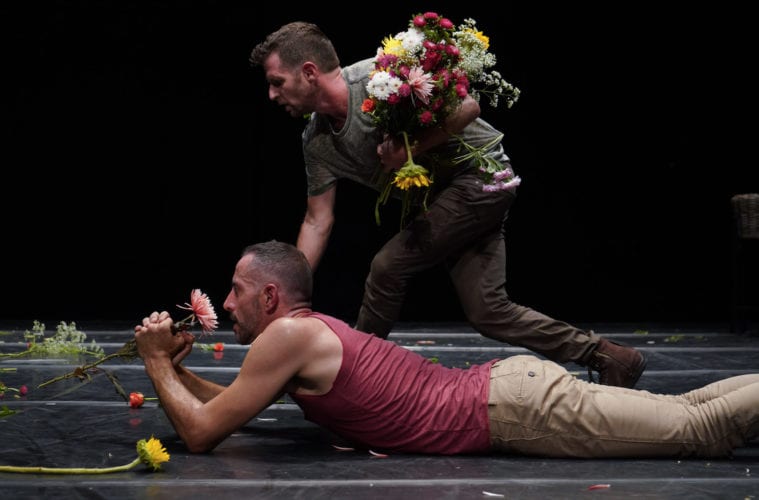 Some experiences in the theater resonate so deeply that it’s best to leave writing about them to the poets.

Such was the experience Niv Sheinfeld and Oren Laor wrought last Saturday during the U.S. premiere run of The Third Dance. Core Dance presented the duet alongside American Playground, an active collaboration between Sheinfeld, Laor and Core Dance at 7 Stages Theater.

The evening journeyed from American Playground’s exuberant romp through Core Dance performers’ joys, ambitions and hopes to a dive into childhood memories. The experience deepened with The Third Room’s look at romance in a long-term relationship. Sheinfeld and Laor’s onstage presence, and the performance qualities they drew out of Core Dance artists, bore raw emotional honesty, trust, fearlessness and vulnerability. Blended with love in its many tones and hues, these feelings were distilled to a potency that could draw empathy from even the most skeptical of viewers.

Core Dance first presented American Playground in 2016 as part of the Exposed festival of Israeli dance and physical theater. Last weekend’s second Atlanta iteration was as colorful and as explosive as the first, but it progressed with more cohesiveness, even as it came to an inconclusive end. 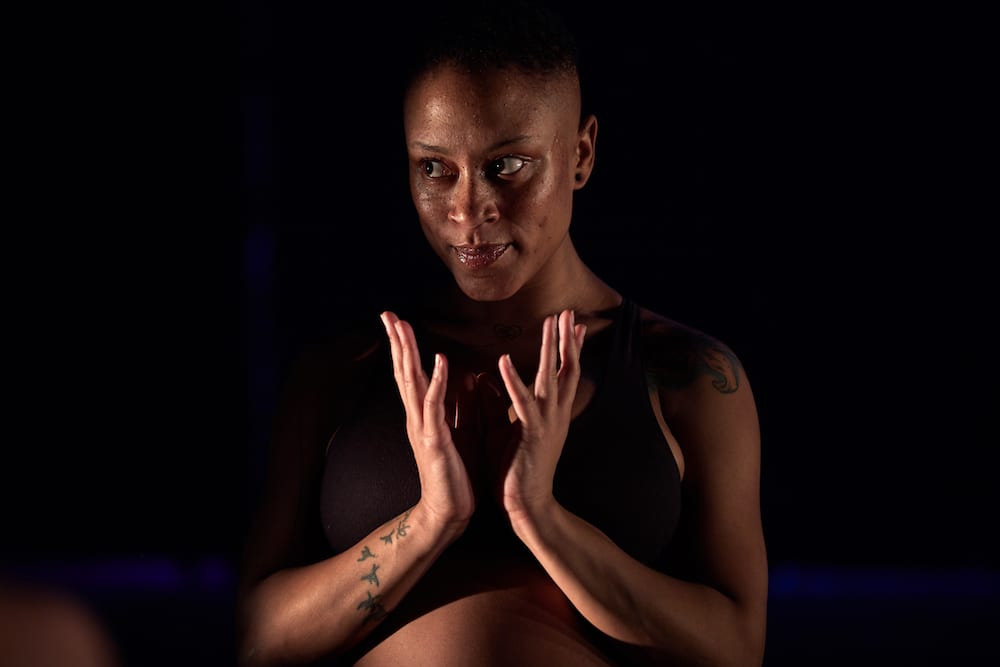 By turns intimate, playful, flirtatious, irreverent and surreal, the dance-theater mashup of classical art and pop culture offered personal narratives and movement vocabularies as disparate as dancers’ movement styles, which ranged from hip-hop to twerking and from acrobatics to Marius Petipa’s Kitri variation from Don Quixote.

Fashioned at first like a televised talent competition with PhaeMonae Brooks as emcee, this over-the top mélange gave way to personal narratives questioning dreams and ambitions, the need for public recognition and the drive to uncover inner authenticity. These stories went deep into the psyche while remaining resolutely and relentlessly physical.

Joshua Rackliffe, who maintains a profile in Atlanta as drag queen Brigitte Bidet, emerged from the group with pantyhose stretched over his head. He pulled the hose’s elastic legs into a taut “V” as they protruded from his forehead like two conjoined identities. Later, bare-chested in shorts and black high-heeled platform sandals, he lip-synced a flamboyant rendition of “La Voix,” based on Swedish opera singer Malena Ernman’s Eurovision song contest entry. The diva persona, song and backup ensemble brought out a side of Rackliffe that was liberated, ecstatic and fulfilled. 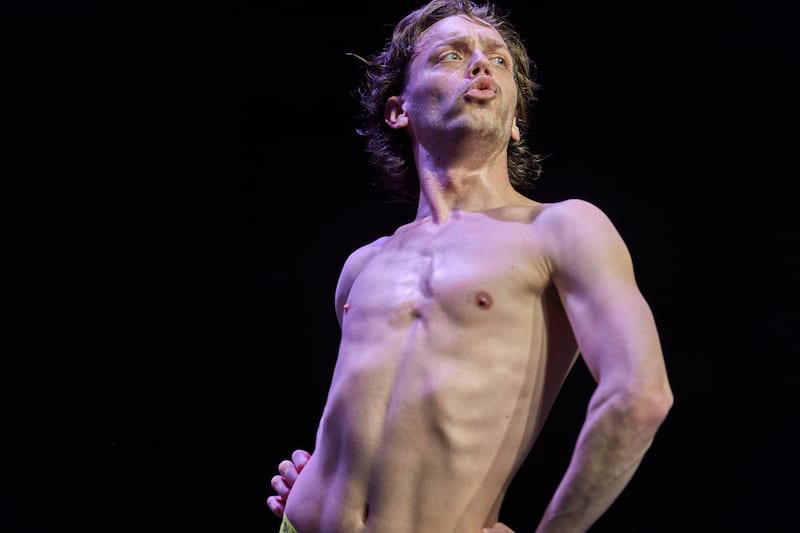 In a darker narrative, Anna Bracewell Crowder described her experience as daughter of a former dancer. Crowder’s mother put her into dance classes at an early age — presumably, in part, to fulfill her own ambitions. Crowder loved ballet, citing her favorite piece as Kitri’s solo variation from Don Quixote. She performed it in sneakers, humming the music to herself. With authority, Crowder taught the solo to fellow dancers. But the solo later took her into a nightmarish rehearsal, with Crowder’s mother (Stefanie Boettle) as coach, dogging Crowder with harsh German commands. Wearing Rackliffe’s crippling platform sandals, Crowder repeatedly attempted the variation, but twisted her ankle each time she landed from a leap. The sequence was comical, absurd and painful to watch, because no matter how hard Crowder tried to please her mother, she failed. Eventually, Rackliffe took off the sandals — perhaps a campy nod to Moira Shearer’s death scene in The Red Shoes.

“Tell me that you love me” is a pivotal line in The Third Dance, Sheinfeld and Laor’s adaptation of the 1990 duet by Liat Dror and Nir Ben-Gal. This continuing story of Two Room Apartment (adapted from Dror’s and Ben-Gal’s seminal 1987 work) explores issues of love, mortality and the need to be acknowledged, through a couple’s long-term relationship, and in the connection between performers and audience.

The magic began immediately — with a few auspicious notes from Mahler’s Symphony No. 1, as Laor and Sheinfeld appeared from darkness with energy and presence that filled out Mahler’s expansive sound. Their foot patterns set a hypnotic rhythm. Circular paths and unfolding gestures picked up the melody’s curves and spirals. In this minimalist opening, the two caught the wave of something real — deeply emotional, physical and visceral — and rode its crest for nearly an hour.

Clichés of romance, such as flowers, a record player and Elton John’s “I Guess That’s Why They Call It the Blues,” were turned in a fresh new way. Extended pure movement sequences amplified those emotions and brought the audience closer in. Near the end, as Sheinfeld and Laor slammed the heads of flowers against the floor, the petals exploded into a fragrant carpet of soft color, reinforcing a pervasive sense of love that was personal and universal, primal and sublime.

In recent years, Core Dance has presented some of the city’s riskiest and most compelling work, and has done it with subtlety, generosity and excruciating attention to detail. Ties with like-minded artists in Europe and Israel, such as Sheinfeld and Laor, have upped Core’s game while connecting Core Dance’s audiences with a larger creative network. Looking back on major works like the company’s Life Interrupted and Germana Civera’s Human Landscapes, it seems Core Dance’s trajectory is only pushing higher and pulling audiences deeper into a creative process that resonates within the body, the psyche and the human community at large.