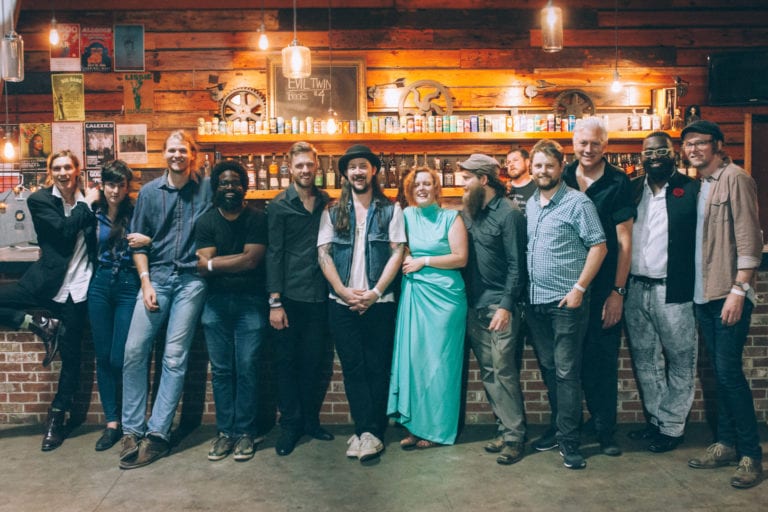 For ATL Collective, celebrating the art of the album goes a long way. (Courtesy of Aaron Schorch

ATL Collective brings musicians together, one classic album recreation at a time

The last 10 years have been a whirlwind for ATL Collective. What initially began as a dream to endow the local music scene with new life, bringing the community together through celebrating the art of the album, has become an expansive reality.

It started small — a string of performances at local coffee shops, recreating classic albums of various genres. Since then, the organization has evolved into a multidimensional concert experience that brings together musicians and fans alike in venues across the city. As it approaches a decade since its first performance in September 2009, ATL Collective made the decision to become a nonprofit last year to build on its legacy as a curator of the musical community.

“We want to catalyze opportunities that enrich the working lives of Atlanta music makers and therefore the fans that support them,” Micah Dalton, creative director and cofounder of ATL Collective, says. “Long term, we hope the communities built from this work will create new kinds of industry opportunities in this market. Right now, we want to continue doing that through our vision of curating listening experiences that celebrate the diverse and unique sounds of Atlanta.”

The organization, through tireless programming and bringing together the best musicians Atlanta has to offer, has become a staple of the local concert circuit — having brought together more than 262 artists across 15 venues to play 98 albums for nearly 50,000 concert-goers. It has tackled legendary cuts from Paul Simon’s Graceland to A Tribe Called Quest’s The Low End Theory. Past lineups have featured a motley crew of favorites such as Little Tybee, Fred Wesley, Adron, Ruby Velle and Hello Ocho.

Fostering community and serving the greater Atlanta music scene is the organization’s strong suit. It’s been a part of its DNA since the beginning, when ATL Collective was just an idea scribbled on the back of napkins by cofounders Dalton and David Berkeley.

The concept for ATL Collective began at Danneman’s Coffee, now Sister Louisa’s Church of the Living Room & Ping Pong Emporium, when the owner of the shop approached Berkeley to put on events on the second floor of the building. Berkeley quickly reached out to his old friend Dalton to lay the groundwork for a new concert series.

“After years of touring and being in the industry, sometimes there can be a lack of love that we start feeling from music,” Berkeley says. “It becomes competitive and isolating, and that’s not what music’s about. We were thinking about what was some sort of way we could get ego and isolation out of the game and bring a new kind of event to the table to answer a lot of these needs we were starting to feel.”

In the first round of shows, everything was bare bones. With no stage or marketing budget between the pair, Berkeley and Dalton relied on connections and intuition alone. They picked albums, rounded up musicians and reached out to restaurants asking for donations of food that played into the name of the album or band they covered that night. Some initial pairings were mac and cheese with Fleetwood Mac, red velvet cake with Velvet Underground and pumpkin pie with Neil Young’s Harvest. Armed with a shtick and a slew of eager musicians, the shows quickly gained traction.

“The shows were packed from the start,” Berkeley says. “People quickly realized that this wasn’t something other people were doing and felt really collective. Not just between the artist, but between the audience too. There was no stage and no backstage — the artist would just be sitting among the crowd, and the crowd wouldn’t necessarily know it, and the next thing you know, the guy next to you would get up and do the next song.”

This blurring of identity between the performer and audience member began to be the soul of the organization. The performances weren’t just about celebrating classic rock and hip-hop records, rather becoming platforms to discover new and up-and-coming local talent. Audiences could hear reinterpretations of their favorite records and gain a new favorite local artist along the way.

In 2011, ATL Collective began a residency at Eddie’s Attic, which paved the way for the organization to expand its reach to new faces and walks of life. Soon enough, by 2014, the performances were bringing in packed crowds at the Terminal West, the Earl and Center Stage.

“We have always been mission-driven over profit-driven, and this move was a calibration of that internal reality,” Dalton says. “Our team has always been motivated by honoring timeless musical works and helping the musician community while doing so.”

Still in the inaugural stage of developing the new model, the organization is exploring how to further serve musicians in the Atlanta community through its concert series and connections.

As new curatorial experiences develop under the nonprofit structure, ATL Collective is specifying its regular programming and breaking it up into three series: Apolla, Double Take and Sweet Soul.

The Apolla series aims to elevate the female voice by highlighting groundbreaking albums, the first of the series beginning with soul songstress Aretha Franklin’s Young, Gifted and Black at the Vista Room on February 7.

The Double Take series takes on the discordant and disruptive albums that have reshaped audiences and musicians’ conventions of genre, and kicked off last month with Sonic Youth’s Daydream Nation.

But it is the Sweet Soul series that plays to one of the greatest strengths of ATL Collective, bringing to life classic funk and soul records. This time around, the organization is bringing along a soul revue showcasing local soul and R&B acts, the first of which will be a Valentine’s Day performance of Sade’s Love Deluxe at Venkman’s on February 14 and February 15.

As ATL Collective enters this new stage in its career, it’s hard not to wax nostalgic. Berkeley, who moved from Atlanta to Santa Fe with his wife to raise their family, notes that despite the success, the organization still keeps it humble.

“Though ATL Collective has changed, what most excites me is how it’s retained the spirit that it started with,” Berkeley says. “That’s something that’s a credit to the strength of the initial concept and credit to Micah and how he has held on and protected the vision. The spirit of collaboration and the lack of ego is still at the heart of it — we’re still celebrating other people than ourselves, be it the other performer, original artist or just the city of Atlanta.”