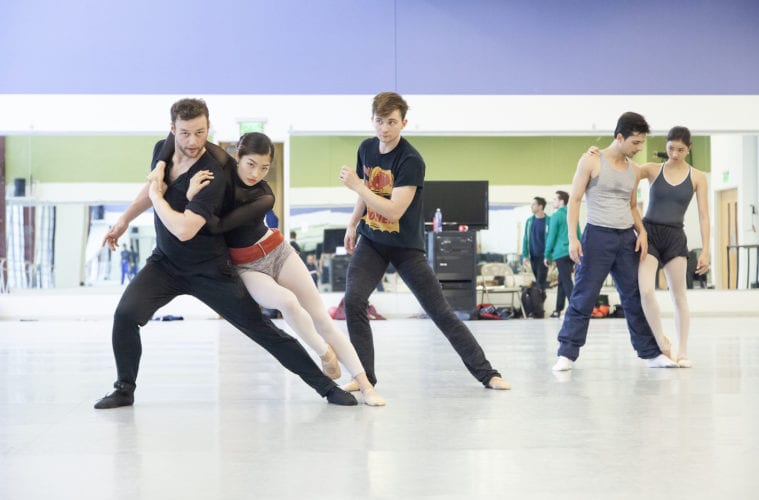 Liam Scarlett (left) rehearses the world premiere of Catch with artists of the Atlanta Ballet. (Photo by Kim Kenney)

The program includes two works commissioned for the company — one new and one in reprise — and the Atlanta premiere of a contemporary ballet by Kiyon Ross, one of only a handful of African American choreographers ever to set a work on Atlanta Ballet’s main company. Ross, a former soloist with the Pacific Northwest Ballet and resident choreographer with Ballet Arkansas, will present his 2012 Sum Stravinsky, an abstract meditation on the composer’s “Dumbarton Oaks” concerto.

Also on the program is Gemma Bond’s Denouement, which was created for Atlanta Ballet’s 2016–17 season and features a pianist and cellist performing a Benjamin Britten sonata onstage with the dancers. The work, architectural and crisp with costumes designed by American Ballet Theatre star dancer James Whiteside, was Bond’s choreographic debut, and she has since landed several commissions nationally.

Of the three choreographers on the program, the most prolific and established is Liam Scarlett, who has created a new work for Director’s Choice. An in-demand choreographer worldwide, Scarlett splits his time between Britain and Australia as artist-in-residence at the Royal Ballet and artistic associate with Queensland Ballet. His much-anticipated premiere Catch, set to Philip Glass’s iconic Violin Concerto No. 1 performed live by the Atlanta Ballet Orchestra, follows on the heels of Scarlett’s Vespertine, which saw its Atlanta debut in 2017 and stood out as one of the strongest and most visually arresting works performed that season.

Ross, Bond and Scarlett all have extensive experience as classical ballet dancers and are either still dancing (Bond with American Ballet Theatre) or have recently retired from some of the world’s top companies. With his triple bill, Nedvigin has an opportunity to showcase and support emerging choreographers. Will the vocabulary, structure or content expand to include a greater diversity of experiences and capture new audiences? Hopefully, Director’s Choice will be a playground for young choreographers to test out ways to push ballet into the next generation.