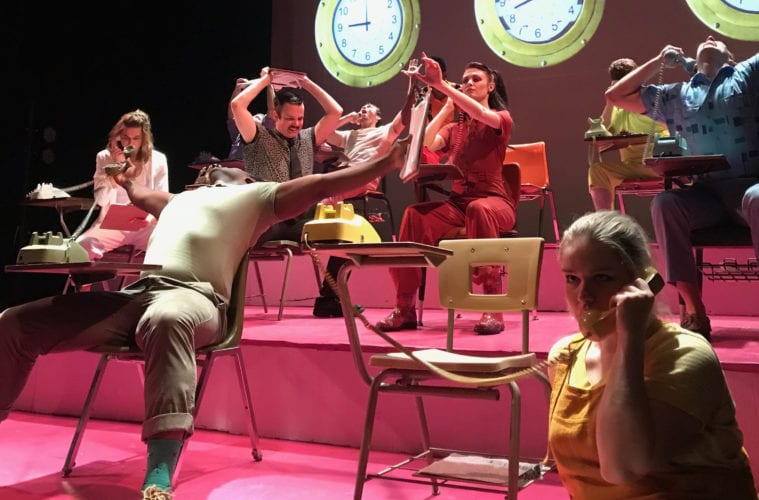 The avant-garde is an art form meant to enhance reality in a way that will pose questions about the way we live our lives. This type of theater offers a glimpse into a world that is paralleled to our own but amplified by absurd presentation. Vernal & Sere Theatre Company’s Spirits To Enforce, onstage through May 12 at Windmill Arts Center in East Point, invites the audience into an absurd reality in which theater people are superheroes who use their powers to inspire drama and imagination.

Spirits To Enforce by Mickle Maher tells the story of a group of superheroes who have secluded themselves inside of a submarine to collect over-the-phone donations for their upcoming production of The Tempest by William Shakespeare. The plot of the show is based in an altered state of reality, offering a whimsical journey unbound by the laws of time and consciousness.

Designers Lindsay Sharpless, Vivian Nguyen and Michael Frederick employ an entrancing use of color and lights in this performance, which elevates the storybook-like quality of the world of the play. Each of the superheroes, costumed by Erin O’Connor who also doubles as director, in monochrome and propped with a matching corded phone. The aesthetic of the show reads of that familiar-feeling superhero era– ’50s- and ’60s-inspired fashion, exaggerated language and bold bright colors.

The actual time period appears to be within that same realm, not modern day, not any particular era, but a unique reality inspired by nostalgia and classic colors and silhouettes. The designers and director of this performance worked to ensure that the world is not so easy to place, leaving a level of discomfort that comes from not knowing exactly where you are. The lighting can be described as powerful, showcasing the intensity of the particular moments and calling focus to the fact that what you are seeing is a heightened form of the reality that theater creators live every day. From the preshow sequence, this play requires endurance for the actors onstage. A captivating and coordinated introductory performance sequence shows the audience that this play will welcome them into a world that tests the limits of the human spirit, physically and mentally. The talent of the cast is displayed in their ability to immediately create a surreal mood for the audience without abandoning any intensity as the show progresses. Each character offers a rich and hilarious backstory for how they came to be their particular superhero.

With their wacky powers and determination to perform, they exist in this submarine as a strong team — deeply connected to their shared passion for this project (and Shakespeare). These superheroes have ambitions that parallel the ambitions of real-world thespians and creators. The actors bring their all to show that the passion that drives them is the same passion driving their superhero alter-egos toward a Shakespearean masterpiece.

The talent displayed by this ensemble cast demonstrates the standards of excellence that Vernal & Sere upholds. The story is hilarious, but the intensity of the performers makes it so much more than a simple comedy. “Presenting imaginative, difficult, avant-garde theatre that makes no apologies or concessions” is what Spirits To Enforce has accomplished through an excellent cast, captivating design and the presentation of a world designed by and for those who love theater.