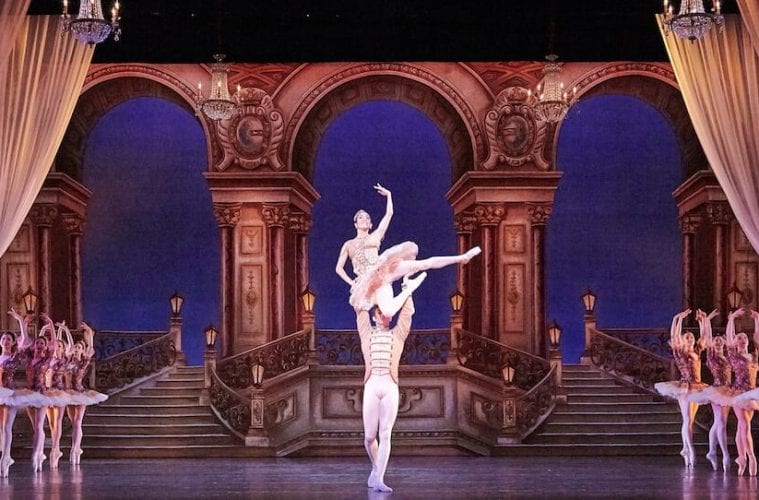 Make no mistake: the tides have shifted at Atlanta Ballet. Since Gennadi Nedvigin, a celebrated dancer with San Francisco Ballet, took the reins from 21-year veteran artistic director John McFall last year, the company has undergone a very public changing of the guard. “Gennadi’s Choice,” Atlanta Ballet’s triple bill that played at the Cobb Energy Performing Arts Centre last weekend, solidified the transition with a concert whose title reads like (and is) Nedvigin’s job description.

The concert title feels vaguely pretentious, but it also symbolizes a turning point. Nedvigin and the marketing team at Atlanta Ballet intend to orchestrate a shift not only in repertory but also in the company’s overall approach to the art and practice of ballet. In his program notes, Nedvigin says the three pieces “elegantly connect to illustrate my vision for the company.” That vision — as represented by a Russian classic, a world premiere by an emerging female choreographer and a contemporary masterpiece — proves both problematic and promising.

Complete with chandeliers, white gauzy curtains and a palace-like backdrop, Marius Petipa’s mid-19th century work Paquita opened “Gennadi’s Choice” and referenced ballet’s courtly beginnings. Petipa defines strict Russian classicism, and Nedvigin, who is of Russian descent and also staged the work for this performance, upheld his legacy. Touting its difficulty in a pre-performance video, Nedvigin called Paquita “the best tool to perfect your technique” and reminded the audience that the work’s detailed precision leaves no room for mistakes.

Naturally, I started looking for mistakes: one dancer was six inches too close to another, a line wasn’t quite straight, a leg was slightly higher than the next. And I resented the didactical approach to this work, because the soloists shined as bright as their gilded costumes. Miguel Angel Montoya — a standout, virtuosic trickster — dazzled with a series of jumps as his powerful legs launched him into the air then released upwards, as light as feathers, before he landed and repeated. Rachel Van Buskirk and Christian Clark delivered stunning solos respectively: Buskirk gently conjured the music with her hands and shoulders in one section; Clark devoured the space as he sailed through turning each leap in another. 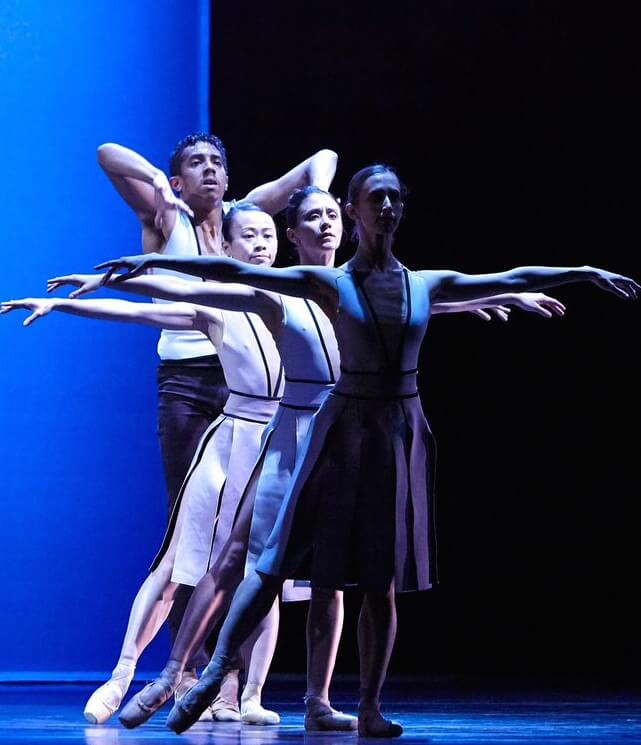 But like a tutu cinched too tight, the work feels rigid and staunchly stuck in an aristocratic past. Will this opulent nod to nobility draw in new patrons? Will it alienate others? In the past, Atlanta Ballet has deliberately shunned the traditional hierarchal company structure, preferring to cast soloists on a project-to-project basis rather than ranking them into descending categories like “principle” and “demi-soloist.” Like many of the country’s major ballet companies, Paquita employs a hierarchy and includes a corps de ballet. The corps serves as a human set, the (almost always) women standing with plastic smiles to form a picture frame for the principle dancers. Kiara Felder, the lone and gorgeous black female dancer, wore pink tights to “match” the homogenous look on stage.

Alternatively, Nedvigin’s choice to include a female choreographer on the triple bill bodes well for a city chock full of female artists and patrons. Denouement, by American Ballet Theater dancer and new choreographer Gemma Bond, is a world premiere and Bond’s first commission for a professional ballet company. Bolstered by Joseph R. Walls’ brilliant lighting design, the stage appeared to deepen as the piece unfolded, revealing a forest of transparent panels behind which the dancers stood like sentinels; they observed — sometimes knowing, sometimes unconcerned — before returning to the group.

Though the movement vocabulary wasn’t particularly innovative, the work’s abstract structure and resistance to typical gender roles and heteronormative subplots was refreshing (no love triangles here). Supported but not coveted by the men, the three female dancers were ferociously fast. Nadia Mara, in a highlight moment that repeated several times, leapt into her partner’s arms, and he spun her at least twice over his head before catching her body horizontally. Pianist Shirley Irek and cellist Charae Krueger joined the dancers on stage and expertly executed Benjamin Britten’s haunting score.

Last on the program was Liam Scarlett’s 2013 Vespertine, a masterwork as richly textured and multi-layered as its sumptuous burgundy velvet costumes (which Scarlett also designed). This was Gennadi’s best and most promising choice. Under a constellation of abstracted chandeliers constructed of small yellow light bulbs, the set harked back to Paquita but transported the audience to a decidedly darker time and place. 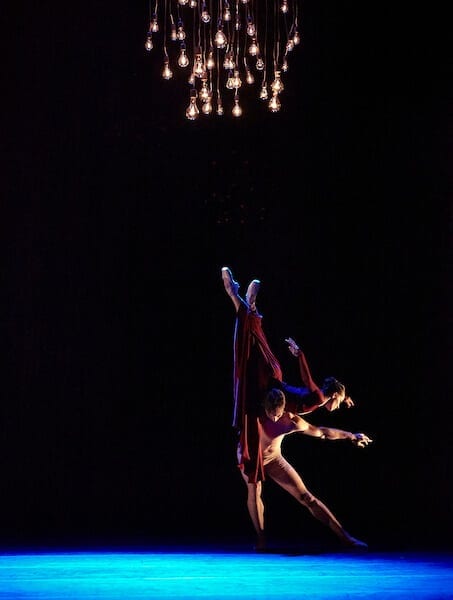 Christian Clark and Alessa Rogers in the atmospheric Vespertine.

Scarlett knows his Baroque music and shaped the movement’s momentum to match the score’s soaring melodies and dramatic undertones. Rarely have I seen a ballet that so cleverly employs costume changes. Half the dancers appeared almost nude in flesh-toned leotards or shorts while the other half wore heavy dresses or long coats. A near-nude Peng-Yu Chen performed an explosive solo alongside clothed and calm dancers. Christian Clark threw out his arms and the heavy fabric dropped from every dancer’s body. The juxtaposition of so much and so little clothing — sometimes on men, sometimes women — invoked questions of vulnerability in a regal, regimented world.

In one of my favorite sections of the night, Clark and Jared Tan, shirtless and wearing identical knee-length burgundy shorts, performed a fascinatingly complex duet. They fell into each other’s arms; they confronted and lifted one another. Exchanging small movements, they engaged in a conversation that was at once aggressive and tender.

“Quality,” which Nedvigin has said he is bringing to Atlanta Ballet, was already here. And Vespertine did what Paquita could not; it tugged at the heartstrings and brought the best out of every dancer on stage. They spoke the work’s secret language. With Vespertine, Scarlett employed the traditions of ballet to create a work that reflects modern sensibilities and values. Hopefully, Nedvigin will nod to the past as he steers the company into the future, not the other way around. Atlanta Ballet is primed for an expanded repertory that draws a wider, more diverse crowd.