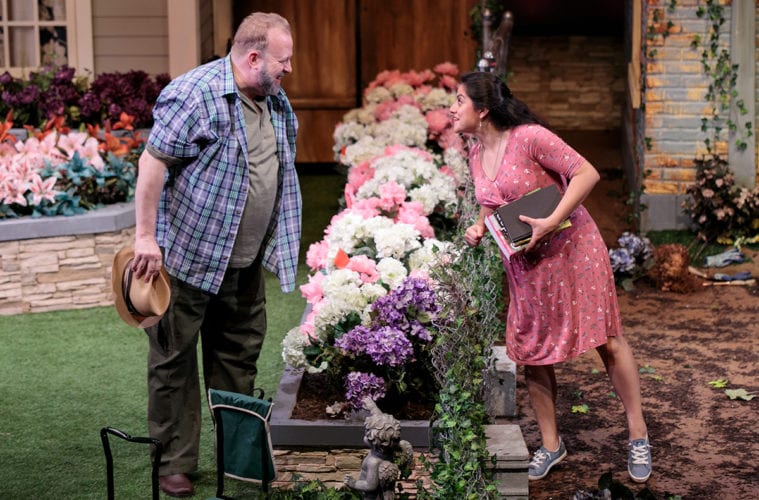 In the producers’ note for the play Native Gardens, Aurora Theatre cofounders Anthony Rodriguez and Ann-Carol Pence ask the question, “Have we, as a society, built too many barriers?” This is the simplest of questions at the core of Karen Zacarías’ suburban comedy, onstage at Aurora Theatre through June 2. Some Atlantans might recognize Zacarías’ work from Horizon Theatre’s popular production of her earlier work, The Book Club Play.

In Native Gardens, longtime D.C. residents Virginia and Frank Butley (who are white) are preparing for the Potomac Horticulture Society’s annual garden competition when their lives are interrupted by new neighbors. Tania and Pablo Del Valle, a young Latino couple, move into a fixer-upper in the upper-middle-class neighborhood. Things are going swimmingly until the Del Valles plan to install a new fence days before the competition. A few weeks before Tania is due with their first child, Pablo invites the partners at his law firm over for a barbecue — a desperate attempt to have “Del Valle” added to the company name. But when the surveyors hit a snag with installing the fence, they must figure out whether good fences actually make good neighbors.

Under the direction of Daniel Jáquez, this comedy showcases the talents of an unlikely ensemble cast — but it works. Carolyn Cook has great comedic timing delivering Virginia’s snarky and sharp one-liners, and Bart Hansard makes Frank dopey and lovable. Cristian Gonzalez and Fedra Ramirez-Olivares balance each other well as Pablo and Tania, his matter-of-factness contrasting her being “passionately rational.”

Set designers Isabel and Moriah Curley-Clay give the cast a great place to play nice. The Butleys’ yard looks like a page out of Better Homes & Gardens, and the Del Valles’ home looks like the pre-renovation version of A&E’s Flip This House. Props designer Cody Russell also deserves a shout-out for a creative incorporation of signs counting down the days until the barbecue — very funny and creative. If this production has any flaws, it’s in the clunky scene transitions. Two Latino actors portray landscapers/fence installers who dance to reggaetón, which is meant to be comic relief but also (unintentionally) reinforces stereotypes.

According to American Theatre magazine, Native Gardens is one of the 2018–19 season’s most produced plays with 12 productions across the country, and it’s easy to understand why. The show is funny and lighthearted at moments but also socially relevant. As the interactions between the Butleys and the Del Valles get more intense, the conversation becomes less about a fence and more about class and privilege.

Frank and Virginia believe that Frank’s chance at top prize in the neighborhood garden competition is as important as Pablo’s chance at making partner at his law firm. Pablo is completely unreasonable for trying to install a fence and host a party in less than a week. At the same time, there’s something absurd about the Butleys not understanding that Pablo’s opportunities to make partner at a law firm won’t come around as frequently as the annual gardening competition. They see their vices but don’t want to give up their positions.

Dig deeper and the conversations start to sound like a debate about the nation’s southern border. Zacarías wrote Native Gardens before Donald Trump was elected president and before Americans knew about children dying in cages. At this very moment, people from Central and South America are walking here to escape political unrest, and there is no easy resolve.

Many people in the country believe that the current crisis at the border is related to colonialism and the displacement of indigenous people more than a century ago. On one side, some are calling for a Reconquista, and on the other side are those calling for a wall that runs the length of the border. Then there are the majority of the people in the middle who feel a lot of different ways because these are complicated issues. Addressing these issues onstage is very much in alignment with Aurora’s strong community engagement and marketing outreach in the Latino community.

What makes Native Gardens so effective as a piece of writing is that it uses a conflict between neighbors as a microcosm for all neighborhoods. Many may remember the saying, “Charity starts at home and carries itself abroad.” Simply put, if we treat each other better on a day-to-day basis, then solving the big issues gets a little easier. Perhaps it’s time to reexamine the barriers and turn them into bridges.