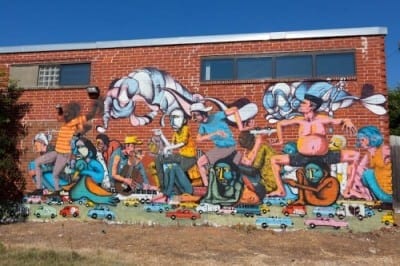 “Living Walls: The City Speaks,” an exhibition of murals scattered through Atlanta and Decatur, by an international array of street artists, opened the weekend of August 12 with a conference at the Museum of Contemporary Art of Georgia, a film screening and gallery exhibitions of the artists’ small-scale works. That same weekend, “Street Art Saved My Life: 39 New York Stories,” an exhibition of Brooklyn artists, opened in Los Angeles, accompanied by a conference at L.A.’s Museum of Contemporary Art and exhibitions at two galleries. 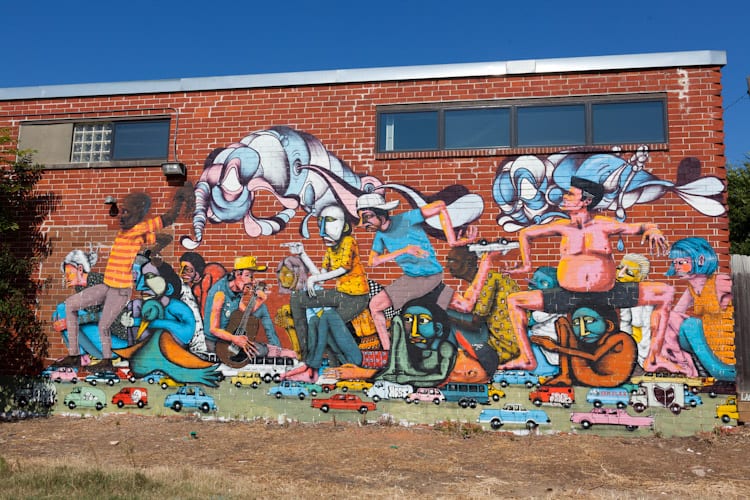 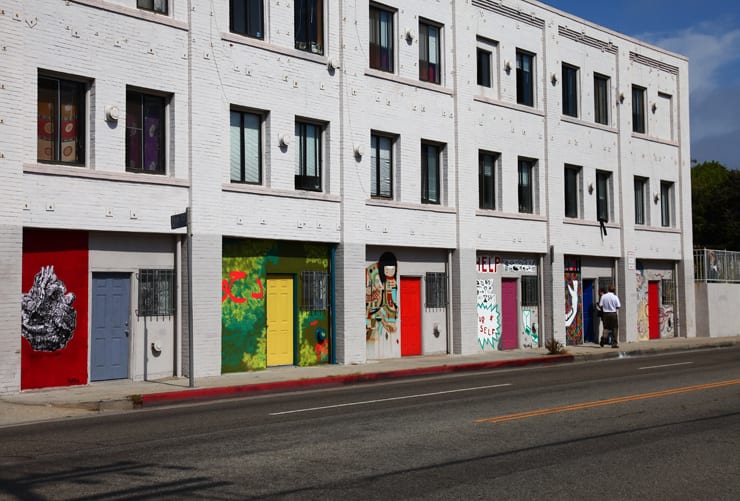 No mere coincidence, the two projects are examples of mounting evidence that street art is enjoying a moment. To wit: 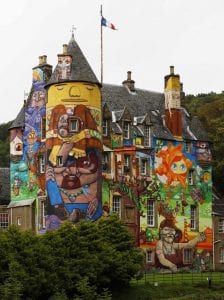 * LA MOCA’s “Art in the Streets,” a sprawling historical survey of graffiti art billed as the first of its kind, drew a record 201,352 visitors by the time it closed August 8.

* The Huffington Post co-sponsored the L.A. conference and hosts a blog about street art.

* In contrast to the typical tale of building owners, the Earl of Glasgow is battling to keep the psychedelic mural (at left) he paid Brazilian graffiti artists $30,000 to paint on the facade of his family’s Kelburn Castle, which violates state preservation rules.

* French street artist JR,  stone-cold brilliant global nomad, won the 2011 TED Prize, joining such alums as Bill Clinton, rocker Bono and writer Dave Eggers. (You can see his acceptance speech here.) JR, who addresses social and political images by humanizing them through large wheat-pasted portraits, is conducting a global effort, called “Inside/Out,” in conjunction with TED. Atlanta will participate through a WonderRoot project. Beginning September 15, large-scale portraits of people affected by the reduction of MARTA bus routes will appear near the affected stops. WonderRoot will have a page on the project’s website. 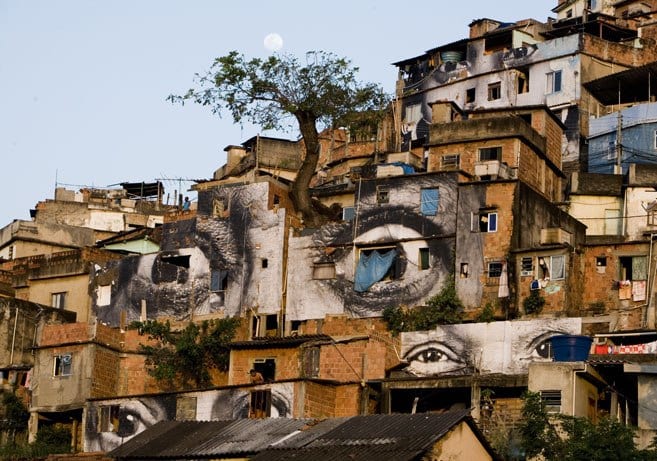 Yes, the art-media-development-philanthropic mainstream has enveloped street art in a bear hug reminiscent of the enthusiasm of 1980s New York. And the artists have returned the embrace. Evincing an enthusiasm that would seem to contradict the genre’s anti-authoritarian roots, “Living Walls” artists such as Gaia and Nanook participate in the burgeoning number of legal wall shows, street art’s version of the biennial circuit, with no apparent fear of losing their street cred. They see it as one end of the spectrum of their practice.

An enthusiastic Gaia, who noted that “Living Walls” is part of a wave of such exhibitions, pronounced organizer Monica Campana “the shit.” Campana, the queen of street art in Atlanta, founded and mounted “Living Walls” last year with Blacki Li Rudi Migliozzi and Priscilla Smith of Eyedrum. A spark plug of an entrepreneur — I’m convinced she could run a Fortune 500 company — Campana used a grant from Possible Futures to double the number of artists this year and provide them with scaffolding and lifts. “Living Walls” has already spawned at least one child: after consulting with Campana, a group in Albany, New York, is launching its version on September 16.

Though still recovering from 2011, Campana is already ruminating about 2012. One thought: to bring in more women. 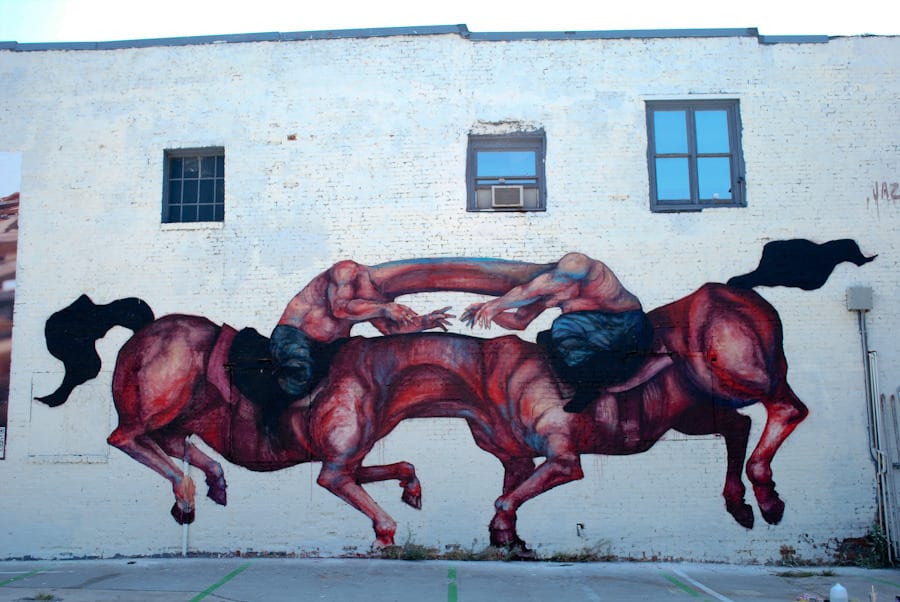 I like that idea. The genre is still largely the preserve of young males, evident in the love of cartoon and video game imagery and fascination with monsters and violence, much of which, to my mind, is a waste of their impressive command of scale, color and draftsmanship.

Thankfully, a number of this year’s artists have gone beyond the stereotypical subjects. Entes and Pesimo, for instance, painted a tender, Picasso-esque mural of a mother lying beside and cradling a child on the side of Spanish Harlem Restaurant, at 262 Edgewood Avenue. Freddy Sam & Ever are behind the ambitious, earnest multi-figure reverie at 302 East Howard Avenue in Decatur. 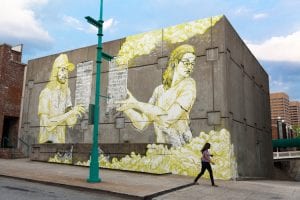 Atlanta has a timely 9/11 memorial (at left), a surreal tableau in which figures hold miniature versions of the flaming towers, by LNY. In an odd coincidence, Escif’s monumental fire extinguisher is across the street, though the reference to China’s flag on its body suggests a different subject altogether (Pryor Street S.W. at Martin Luther King Jr. Drive). In another strange coincidence, Jason Kofke’s mural in Decatur also mixes emergency and China in a line drawing that mimics illustrations of instructions on how to use an oxygen mask on an airplane, with a Chinese text (308 East Howard Avenue). Is this a new direction for his series “Everything will be OK”? 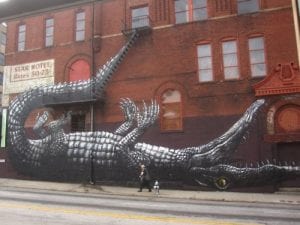 Monumental animals are a popular subject. ROA’s giant alligator (at left) exemplifies street art’s playful side. The beast is on its back, its tail cleverly following the line of the fire escape (209 Mitchell Street S.W.). And talk about site-specific: the mural graces the wall belonging to Friedman’s Shoes, which specializes in oversize footwear for the likes of professional basketball players and features a room devoted to exotic skins.

On a more serious note, the way the heads of the men and horses merge, as if they’re all one beast, in Jaz’s warriors on horseback (above) suggests something about war, whether he intended it or not (483 Edgewood Avenue).

OverUnder, Labrona & Gawd collaborated on a lively frieze (top photo) suggesting the energy and woes of urban life. Giant figures seem to use cars as roller skates in this image of the passing show (Kirkwood Avenue S.E. and Kenyon Street). Though a willing participant, OverUnder has bemoaned the de-undergrounding of street art. As he told Creative Loafing, “Back in the day it was all about street cred. Now, it’s all about Internet cred.” Indeed, most street artists, like artists of any genre, now have their own websites.

Never fear. There are plenty of unruly sorts to take the place of those who have moved up in the world. LA MOCA wasn’t so happy about the uninvited graffiti on its facade, which was inspired by the show it mounted to celebrate such outlaw behavior. As Gaia might say, get over it. “Street art needs to be illegal because we need this chaos,” he said at the conference. “You can’t have one without the other.”