At first glance, Pinch ‘n’ Ouch Theatre’s new production of “Bachelorette” might bring to mind the recent hit movie “Bridesmaids,” and it’s true that the two share surface similarities: on the eve of a big wedding, a group of female friends gather for some hugging, fake smiling, pill-popping, carping and back-stabbing. But the play “Bachelorette” was an off-Broadway hit in New York in 2010 and preceded the movie. The play is funnier, darker and far more knowing. Think not “Saturday Night Live” but “Who’s Afraid of Virginia Woolf?” Not “Mean Girls,” but really mean girls. Disturbing girls. The show is running at 7 Stages’ Backstage through September 18. For tickets, click here. 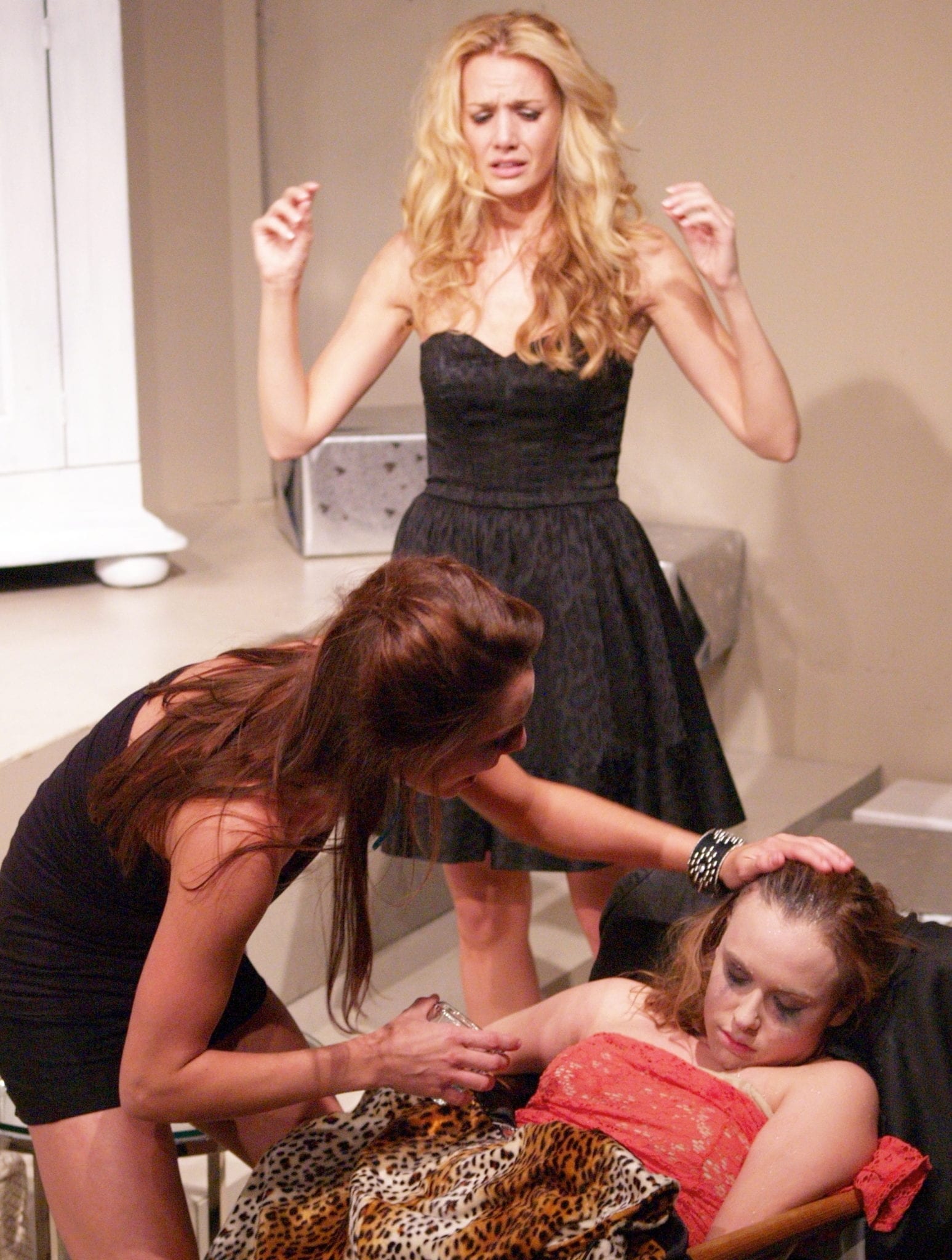 The bride-to-be of “Bachelorette,” Becky (Jessica de Maria), has upset the natural order of things. She’s overweight and was the loser in high school and college, socially awkward, always without a boyfriend. But she’s not just the first of the group to get married, she’s somehow snagged a wealthy, good-looking hedge fund manager as a husband. Her friends, now entering their late 20s, gather in her luxurious Fifth Avenue hotel suite to wait for her arrival and to “celebrate” her good fortune. Former prom queen Katie (Elizabeth Lanier) makes the first drunken reference to the absent Becky as “pig-face fatty-fatty fat fuck.”

“Bachelorette” is actually part of a series of seven plays by young Los Angeles playwright Leslye Headland based on the seven deadly sins: one play for each sin. “Bachelorette” is about gluttony, and there are enormous appetites and a vast amount of consumption in the show. Those uncomfortable with frank sexual talk or depictions of drug or alcohol abuse are here forewarned. 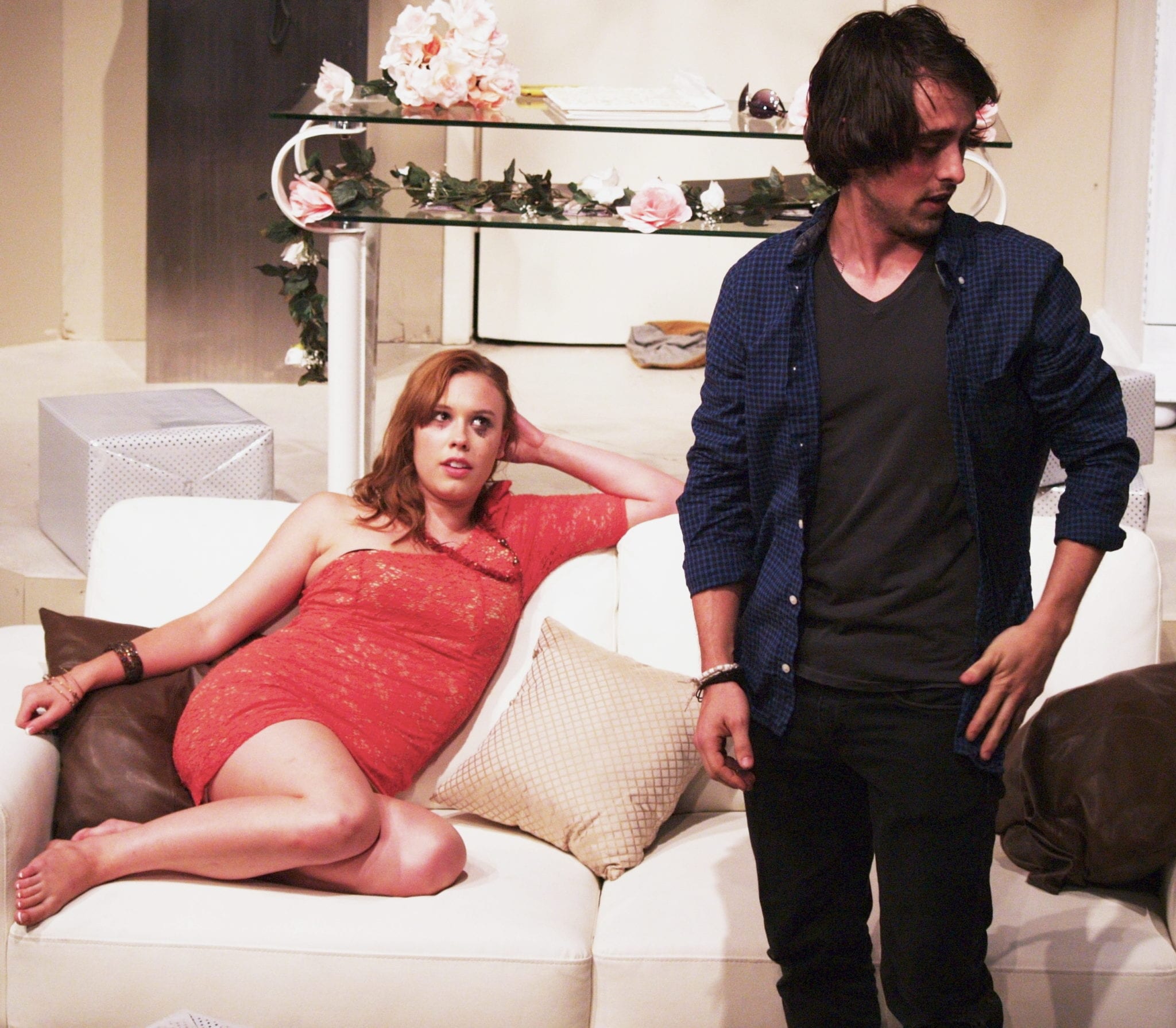 The cast seems at home in the play’s contemporary situations, and the action and dialogue clip along at a good pace under Grant McGowen’s direction. Lanier shines as the vulnerable, unhappy, self-medicated Katie, who is seeking to knock herself out: she’s depressed, still living at home, working retail and recovering from a recent suicide attempt. Ann Marie Gideon’s Gena is tough, trashy and tasteless. She is the most cynical in her breakdown of the world’s exchanges: she knows the values of sex, money, brides, dresses and drugs and isn’t afraid to state them. But as the most honest about the world’s merciless economies, Gena ultimately reveals herself as the one who can most stick to some form of principle and decency: Gideon’s depiction of Gena’s defiant protection of Katie is one of the play’s best moments. Though Becky enters only in the final act, de Maria does some great catching up in making her presence felt, and her scene with Sarah Blackman as pretty but duplicitous first bridesmaid Regan becomes a late focal point. And Bryan Brendle as Jeff, one of the men who drops in on the party, nails the word “douchebag” so well it’s eerie.

There are currently plans to make “Bachelorette” into a movie starring Kirsten Dunst (shudder) directed by Will Ferrell (shudder shudder), so seeing the play before that duo gets their hands on it is highly recommended, especially since Pinch ‘n’ Ouch’s production is smart, funny, disturbing and intimate — a thorny, troubling bouquet well worth catching.