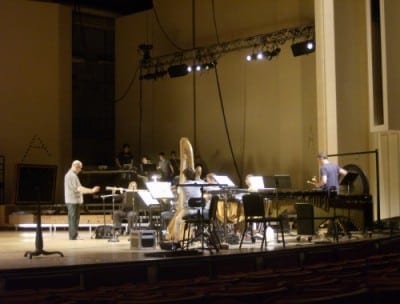 There’s no grass on the stage — not yet — but at a Tuesday rehearsal in Symphony Hall, the orchestra’s acoustical shell has been pushed aside, revealing the naked concrete back wall and rows of black risers. A pair of dancers are going over their moves in intensive preparation. In a few hours, the musicians will take a final run-through of the treacherous and subtle 80-minute score. The pieces are coming together for one of the big autumn events on Atlanta’s dance and music calendars: a staged production of “Maá,” a ballet by Finnish composer Kaija Saariaho, mounted by the dancers of gloATL and the musicians of Sonic Generator. Atlanta Symphony Orchestra Music Director Robert Spano will conduct.

“Maá” will be presented in the round in two performances, Friday and Saturday, September 9 and 10. Audience members will sit on the grass-covered stage and in the hall, making it a unique event on many levels. For tickets, click here. 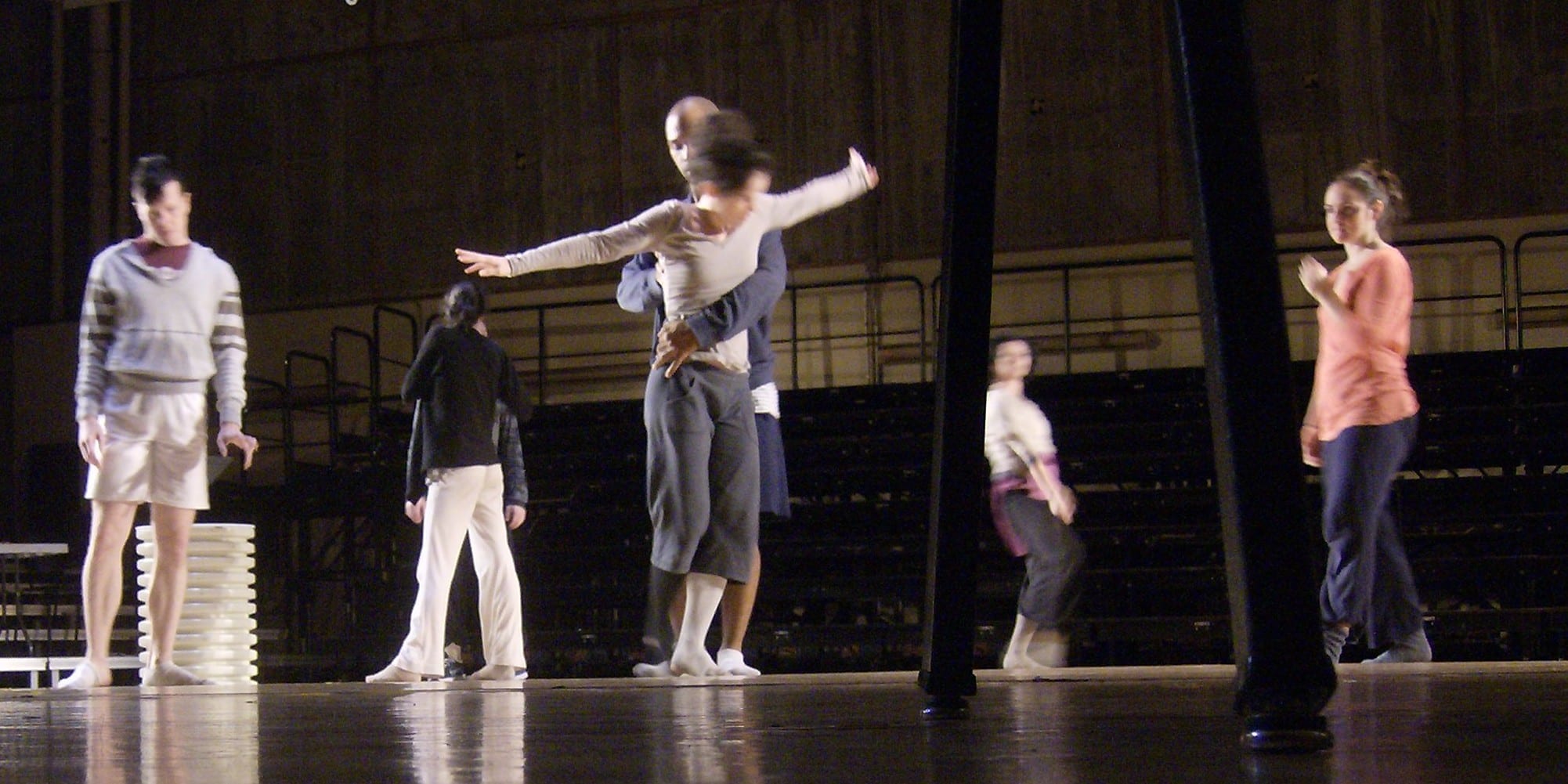 “Maá,” which translates as “earth” or “land,” came to the attention of percussionist Tom Sherwood, Sonic Generator’s artistic director, through its American premiere last September in New York. Although Saariaho is a major figure in the contemporary music scene, “Maá” had not been staged as a ballet since its world premiere in 1991. Because it requires an ensemble of just seven players plus electronics, Sherwood saw it as an ideal, albeit challenging, project for Sonic Generator. He was already a fan of Saariaho’s music and was intrigued that “Maá” was written to be choreographed, not merely a composition to which someone later added dance.

It will be the latest and in some ways the most traditional collaboration between Sonic Generator and gloATL’s Lauri Stallings. The groups have come together mostly in unconventional spaces, such as Lenox Square mall and the atrium of the High Museum of Art.

Sherwood describes Stallings’ choreography as “kind of earthy. There’s a certainly sensuality to it, which I also grab from Saariaho’s music. Also there’s a certain lightness.”

Choreographing “Maá” has posed a number of complex challenges for Stallings, beyond the simple fact that the music does not offer up the typical rhythmic frameworks found in most dance music.

“I thought we were going to be negotiating mostly with the space,” says Stallings, speaking of the bare Symphony Hall stage. “It turns out that I was constantly begging Saariaho for us to have some sort of peace agreement.” (In this respect, Stallings’ situation is akin to Carolyn Carlson’s, the choreographer of the original Finnish Ballet production, as Carlson’s improvisatory methods contrasted with Saariaho’s scrupulously architectural approach to composing.)

“My work is not style, it’s language,” Stallings explains. “I’m not going to start speaking Finnish because Saariaho is Finnish. The challenge is finding the genuineness of the philosophies within the language. And that’s what’s been hard for us. Because she’s not necessarily philosophical. She’s so direct, kind of out-in-front. She’s internalizing a great deal in this music; certainly she’s internalizing light, first and foremost, and that’s a part of her childhood. I believe in every one of her works light may be her most prevalent theme.”

She continues, a little metaphysically: “I don’t know if I would have these strong feelings about her if I weren’t female as well. It’s terribly feminine, it’s very female, it’s this suspended thing, this vessel that’s protected and yet has the ability to expand — what we call deflate and inflate. And that’s pretty fascinating for me, as a 3-D artist, [when you] realize that my whole world is based on a relationship to space, and how I can get it to have a pulse.”

The extensive electronics in the score also have a three-dimensional role. While the audio feed is a quadraphonic mix — including the rhythmic jog of crunching snow and crashing waves, tweeting birds and sonic washes of color — the traditional architecture of Symphony Hall requires some 20 speakers to be deployed throughout the room. This, says Sonic Generator’s executive director, Jason Freeman, who is overseeing the realization of the electronics, will hopefully allow the electronic sounds to be balanced for the entire audience, especially given that the audience will be seated both on stage and in the auditorium. Freeman, who is a noted composer in his own right, points out that the large clusters of synthesizers used in 1991 have been replaced, in this production, by a pair of Macintosh laptop computers.

Although the score for “Maá” is written for a chamber ensemble of just seven musicians plus electronics, the piece requires a conductor. For that, Sherwood approached Spano, who has worked extensively with Saariaho’s music. His response to the invitation, says Spano, was “an instant yes!” (Curiously, the ASO is not involved in the production or marketing of the event, even though its music director is conducting in its home venue and many Sonic Generator musicians are moonlighting members of the ASO.)

Saariaho’s music itself has been loosely described as ambient, Impressionistic and even post-Spectralist. Her opera “L’amour de loin,” from 2000, made her a star among European composers. Her opera “Emilie” made its U.S. premiere a few months ago at Charleston’s Spoleto Festival. But while her music does focus a great deal on timbre, these words fail to acknowledge how small rhythms and articulations play an important role in the morphing of individual sounds and thematic ideas within a long musical stream. It unfolds sensually, organically, a forest of sound.

All in all, “Maá” is a serious and major undertaking. Saariaho, Spano and Stallings are prominent names that could draw additional attention from it. But the real success is going to depend on how the collaboration between Sonic Generator and gloATL plays out in terms of the performance itself, whether it leads to equally substantive future collaborations, and whether tackling such a project can help persuade the national and international arts communities to better recognize Atlanta as a place of substantive creativity.