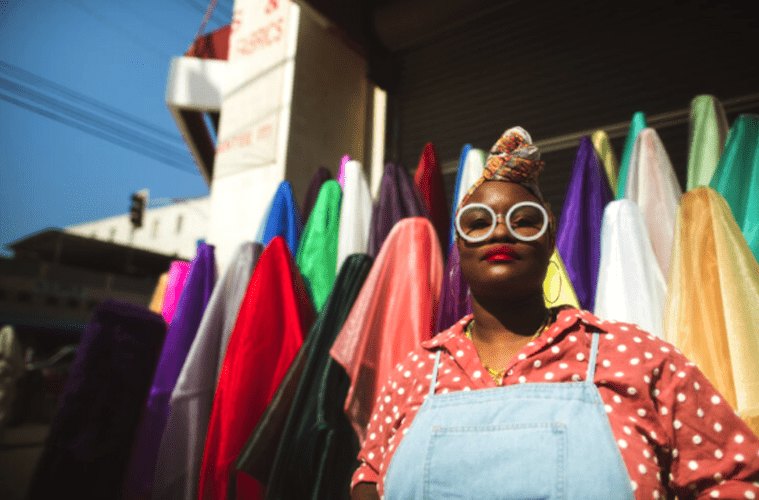 "The rich patterns and colors in my work come from explorations of my obscured African heritage," says Yuzly Mathurin, whose influences include the Harlem Renaissance and hip-hop culture. (Courtesy of the artist)

Yuzly Mathurin escapes her studio and takes to the streets with paintbrushes in hand. As a fine artist with 20 years’ experience, she’s been tilling new ground in Atlanta’s public-art scene. She debuted her first public mural in 2018 and, this year, she’s collaborating with Living Walls to unveil her largest painting yet, bold portraiture that honors diversity and uplifts the marginalized.

“The rich patterns and colors in my work come from explorations of my obscured African heritage,” Mathurin says on her website. “The more I learn, the more arresting and deeply pigmented the colors I use are.” 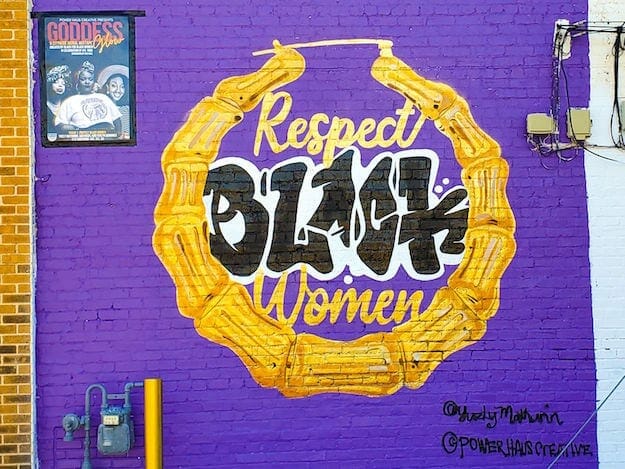 Mathurin, 37, is a first-generation Haitian American. She was born in Nyack, New York and raised in Orange Park, Florida. She  moved to Atlanta in 2018 and immediately built relationships with fellow artists. She’s collaborated with the Atlanta BeltLine, Power Haus Creative and most recently, Adult Swim on the Cartoon Network.

She takes pride in exploring her African heritage through paintings, photographs and graffiti art, and aspires to unveil the beauty of people of color. With the rise of hate crimes and police violence against Black citizens, Mathurin believes images depicting Black joy are essential. Through social media and her paintings, she tries to use her voice to support voter engagement and social justice movements. During the 2020 U.S. Senate elections, to drive votes. Mathurin designed a re-creation of Rosie the Riveter, using her own likeness. “I wanted to showcase a Black woman fighting for change, especially being here in the south where the Black female vote is crucial,” she says.

Influences include the Harlem Renaissance and hip-hop culture. Artists such as Pablo Picasso, Frida Kahlo and writer Maya Angelou are daily inspirations, she says, “not only for their work but their life stories.” Whether doing an oil painting on canvas or a large-scale mural, Mathurin uses rich palettes to create faces of strength and resilience. “I value our hardships,” she says, “and the bright future that lies ahead if we dare to dream.”

Mathurin has down murals downtown, in Grant Park, in Lakewood Heights and Poncey-Highland. Here are a few of them.

Adult Swim x Living Walls, 2021: You’ll find the emerald wall with the message  “Spread Love, Not Hate” behind the Plaza Theatre in Poncey-Highland. This painting,  commissioned by Adult Swim and produced by Living Walls, shows a Black woman in a floral kimono to celebrate Black and Asian cultures. “This piece speaks to the importance of honoring people of color, regardless of their country,” Mathurin says. “We won’t stop abuse and discrimination until we each learn to accept and celebrate the beauty of difference — whether that’s of background, language or skin color.” 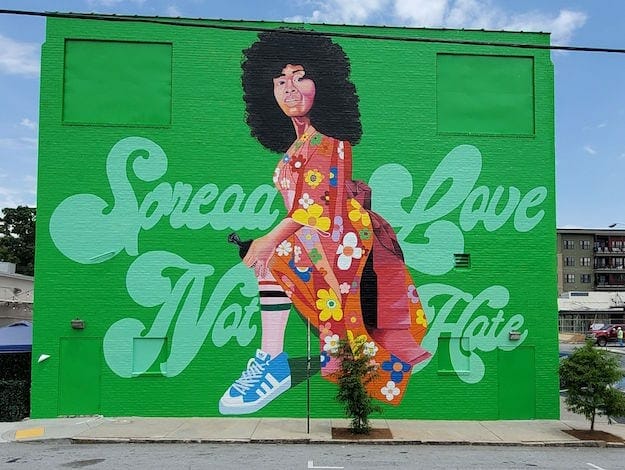 “Spread Love, Not Hate” in Poncey-Highland. The Black woman in the flowered kimono celebrates Black and Asian cultures, the artist says. (Photo by streetartmap.org)

A Journey of a Black Girl, 2020: The mural, commissioned by the Atlanta BeltLine and curated by Courtney Brooks, can be found on the Southeast Trail. It depicts a young Black girl spray-painting the words, “Girls with dreams, become women with vision” on the Home Girl’s Clubhouse, a former electrical building that’s now a safe–play place.

Kaeperbowl, 2019: Mathurin answered the call when the Atlanta artist known as  Occasional Superstar (aka Fabian Williams) sought muralists for the project, which coincided with Black History Month and Super Bowl LIII held here. The project’s purpose was twofold: to show support for NFL player Colin Kaepernick, who became unemployable when he began kneeling during the national anthem, and to answer those who destroyed Williams’ original Kaepernick mural. 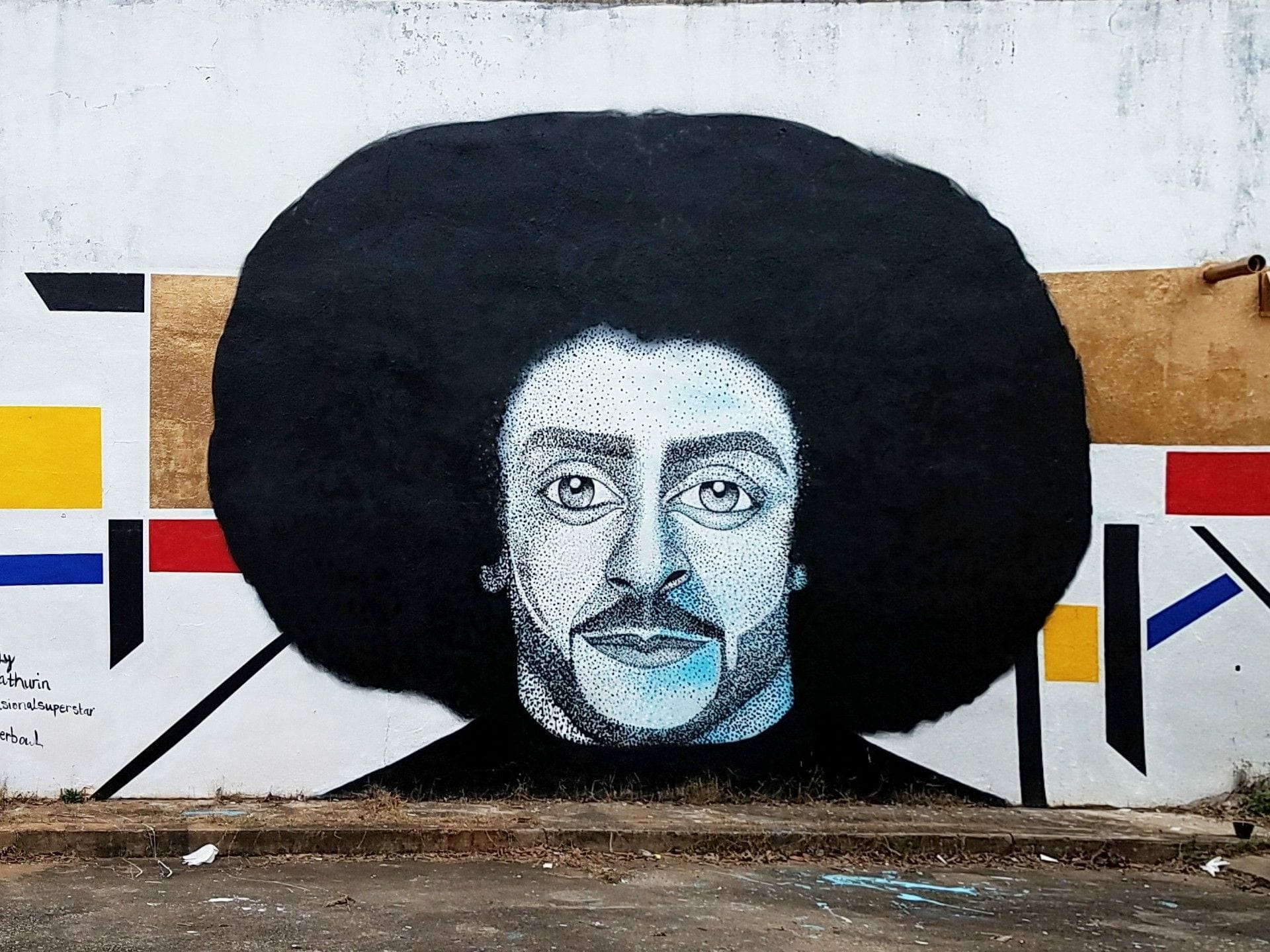 Yuzly Mathurin did her 2019 Kaeperbowl mural, in Lakewood Heights, with a hand injury. (Photo by streetartmap.org)

This was Mathurin’s street-art debut. Her mural features a black-and-white image of the  quarterback, his Afro prominent and small black dots detailing his face. The dots came from the handle of a paintbrush. Mathurin developed this pointillistic style while recovering from a 2013 stroke. “Being a part of this project,” she says, “reminded me of the importance of my voice as an artist.”

Mathurin’s canvas work is part of a fall exhibition at LAAB (the LA Art Box) in California. Follow all of her work via Instagram and her website.