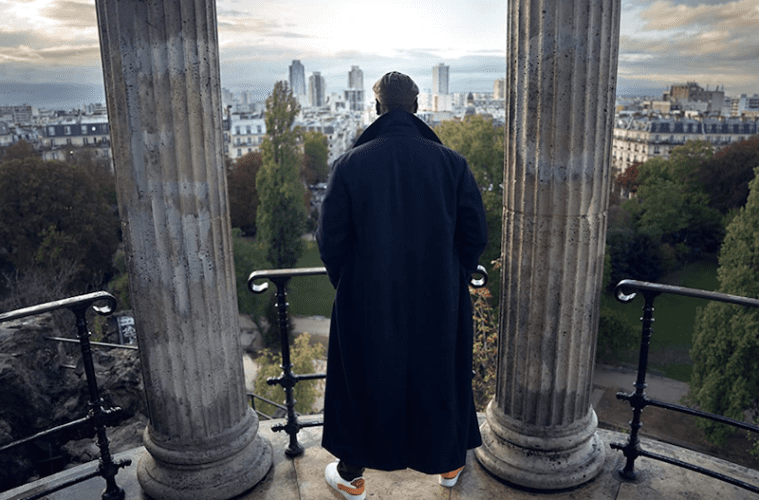 Streaming in July: On a twisty-turny road with “Sweet Tooth,” “Lupin” and “Panic”

The opening moments of SWEET TOOTH (Netflix, eight episodes) may make you think, “Too soon?” As they follow their everyday routines, people of the world start sneezing. Their left pinkies begin to twitch. Millions get deathly ill. Most die. Soon, once-packed urban streets are empty — and while in real life (knock wood) we haven’t endured stampeding chaos and helicopters exploding midair, the echoes of COVID might be uncomfortable for some viewers.

Here, the pandemic is called the Great Crumble. It’s fiction. But after the last 18 divisive months, there’s unexpected, real-world resonance when the narrator (James Brolin) observes, “The thing that should have brought us together only pulled us further apart.”

The limited series, based on graphic novels by Jeff Lemire written well before COVID-19, focuses on 10 years after the crisis started, when a huge slice of humanity died, and babies are now born as hybrids — human but with animal traits.

Our 10-year-old hero is named Gus (Christian Convery). He has deer antlers on his head and extremely sensitive, fuzzy ears. Spirited away at the start of the Crumble by his dad (Will Forte) to a hand-built cabin in Yellowstone, Gus grows up unaware of things beyond this patch of woods. He doesn’t know that much of the surviving world blames hybrids like him for the lethal virus (a chicken-or-egg situation), or that a self-styled militia known as the Last Men have hunted his kind for years, and brutalized fellow humans, too.

Awareness comes when Dad disappears from the story, and Gus lands in the unhappy custody of a grumpy, onetime football star named Jepperd (Nonso Anozie, delivering a great slow burn of a performance). Gus nicknames him Big Guy; Jepperd’s nickname for Gus gives the show its title. Gus’ goal, if not Jepperd’s, is to travel to the fabled place known as Colorado, where his mother, Birdie (played by writer-director-actor Amy Seimetz), supposedly lives.

Adventures follow for the oddball duo. They’re intercut with two other narratives that gradually converge. One involves physician and scientific researcher Singh (Adeel Akhtar), whose wife is secretly ill with the virus, a fact he must hide from their friendly but murderously self-protective suburban neighbors. The other centers on Aimee (Dania Ramirez), who has spent the post-Crumble years living in an unremembered zoo in an improbably abandoned, serene city, where she fosters a family of hybrid orphans.

Even when the plot grows dark in Sweet Tooth, everything is maybe a little too safe, the edges sanded down. As far as end-of-the-world narratives go, Fury Road this isn’t. Despite its apocalyptic premise, the show is weirdly sweet and family-friendly. Not great, exactly, but compelling in its own way.

NETFLIX  |  High on the Hog

HIGH ON THE HOG: HOW AFRICAN AMERICAN CUISINE TRANSFORMED AMERICA (four episodes) is based on food historian Jessica B. Harris’ 2011 book of (almost) the same name. She turns up in the first episode, a spiky, smart, engaging, inquisitive tour guide. She knows her stuff. The problem: She doesn’t return for the remaining episodes.

Our host, instead, is Atlanta-based Stephen Satterfield, a food and wine expert and Whetstone magazine founder. He fits the bill as an attractive, youthful focal point, but he seems out of his depth as he travels to Africa and back to the American South, eats the local cuisine, and murmurs over and over again, variants of, “Mmm, this is delicious — so good.” He doesn’t brim with curiosity or questions, and he seems a little self-conscious around the camera. (Samin Nosrat would never be cast as the most photogenic figure for a TV show, but Netflix based the limited series Salt Fat Acid Heat on her book, and she was a tremendously engaging, chatty host, as fascinated by the people she met as by their food.)

Still, Hog is worth watching. Some stories are familiar, some new. Among my favorites: a young woman in South Carolina, who’s trying to preserve her community’s culture by cooking traditional dinners, even as eminent domain is tearing that community apart. (Same old story: A highway is being built straight through the neighborhood of people under-empowered to oppose it.)  And there’s fascinating information about both George Washington and Thomas Jefferson’s enslaved chefs and their fate once they left their “employers.”

By the end of the short series, Hog somewhat loses the thread of its purpose. But I’d like to see more of it. What it really cries out for is a redo or extension, with Harris taking center stage where she belongs. And maybe giving us some recipes as she goes.

Since January, fans have been waiting for the second half of Netflix’s Paris-set series LUPIN (five episodes), one of the platform’s greatest global hits. A continuation of the cliffhanger finds slick thief Assane Diope (Omar Sy), who bases his schemes on the exploits of the fictional Arsene Lupin, still plotting to revenge himself on the crooked bigwig who framed his father. To say much more would spoil the show’s many pleasures. There are probably a few too many twists and brilliantly devised scenarios to be believed, but the élan of the show and the charisma of its actors carry the day. (FYI, if you haven’t watched the first five episodes, you’ll be lost.)

The challenge of watching Lupin, as it jumps time frames between the present and the young Diop’s formative youth in 1995, is trying not to burn through all five hours in one sitting. I managed to watch the show in two. Smarter viewers will pace themselves more rigorously.

The series ends with Diop’s promise to his family, as he heads into hiding: “You won’t see me, but I’ll be watching over you.” As fans of Lupin, we’ll look forward to watching him anytime the show returns.

A fairly generic, small-town thrill ride based on a YA book, Panic (Amazon, 10 episodes) unfolds in sleepy (naturally), fictional Carp, Texas. The only way young people feel they can escape their town is if they score the cash prize that comes from winning the secretive, often lethal, summertime game that gives the show its title.

The most recent high school grads are the only townsfolk allowed to play. (The adults, inexplicably, don’t seem to know a lot about the game.) The main characters are Heather (Olivia Scott Welch), a go-getter living with her kid sister and their white-trash mom; Natalie (Jessica Sula), Heather’s best friend and daughter of a local cop; their other best friend, Bishop (Camron Jones), smart son of a controlling judge father. He’s also Heather’s secret crush. Also in the mix: Dodge (Mike Faist), a taciturn, lanky new kid in town, and Ray (Ray Nicholson), a rowdy redneck with more self-awareness than he likes to reveal.

All the Panic players — minus Bishop, who watches from the sidelines — have to meet in clandestine sites at all hours, solve riddles and perform stunts: jumping off a cliff into a quarry, walking rickety planks suspended several stories over nothing or wander blindfolded into traffic. It’s all for a pot of $50,000. Students have died doing this, and their deaths seem to factor into who’s manipulating the game and its contestants.

There are so many twists and reversals that by the end, Panic can no longer spring back into coherent narrative shape. One character, in particular, is guilty of so many betrayals that it doesn’t make much sense when those betrayed respond with basically a shrug and a free pass. The show does gives us the mandatory, attractive young cast. Among them, Nicholson needs to take care, as he builds a career, not to lean so heavily on his resemblance and manic energy of his famous dad, Jack.

LISEY’S STORY (eight episodes, dropping every Friday through July 16) shows how too much prestige can kill what could have been a pop-culture guilty pleasure. Stephen King has scripted every episode of this series based on his novel, and the unedited self-love of his own work is one reason this thing is a protracted eight hours long. (I’ve watched half of it.)

The mythology is spelled out both at great length and incredibly vaguely. Lisey’s Story shows that even the best artists — Moore, Joan Allen and Jennifer Jason Leigh as Lisey’s sisters, director Pablo Larraín (Jackie) and cinematographer Darius Khondji — can give it their all and be hamstrung by the material.

Comedian-musician Bo Burnham, last seen as the almost-perfect boyfriend in Promising Young Woman, has a stand-alone special titled BO BURNHAM: INSIDE. Filmed in the claustrophobia of his own abode, it features a series of his songs, with witty lyrics, commenting on the constraints (physical and political) of the past 18 months

Whether you care likely will vary from one person to the next. Even though Burnham questions his own White male heterosexual entitlement and asks if his self-examination isn’t just another form of narcissism, it’s hard not to feel that the answer to the second part is, yes — even if, in bits, it’s clever narcissism. I liked his spot-on skewering (posing in big hats, a plaid shirt off his shoulder like Taylor and lighting a pumpkin candle) as he sings, “Is this heaven, or just a White woman’s Instagram?” But I couldn’t make it through the whole show (other critics have raved). Maybe it’s because, even though Burnham is admirable for trying to make material out of a year-plus of house confinement, it started to feel, literally, too close to home. Those same two words popped up again: Too soon?

WANT MORE TO BINGE? Catch up with our June column, featuring reviews of Amazon Prime’s The Underground Railroad, Netflix’s Sons of Sam: A Descent Into Darkness and HBO Max’s Hacks, among many others.