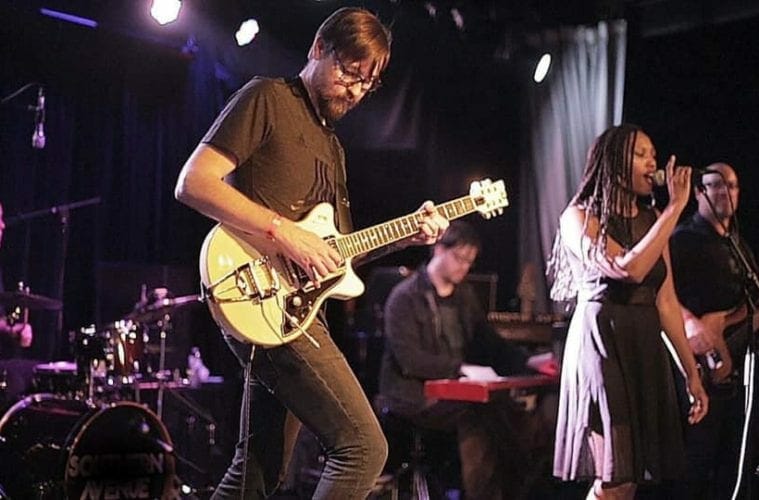 Singer Tyler-Simone Molton owns each striking visual frame, with performances that range from delightfully demented to tongue-in-cheek satire. That undeniable stage presence, plus trademark take-no-prisoners lyrics cowritten with bassist Jon Renaud, are two reasons why this rapidly rising band was recently named one of the Top 100 Bands to Watch in 2021 by Alternative Press magazine.

Molton recently spoke to WABE-FM about the origins of “Not Sweet Enough,” saying that he “definitely wanted to have a song that spoke about issues that were personal to me but were also relevant to what was going on, especially in Georgia with the government regulations on women’s rights. We thought it was a good time to write a song in a ‘punk fashion’ because historically that’s what punk does, talk about ‘the man’ and how to stick it to ‘the man.’”

The band will perform this weekend as part of Punk Black’s pop-up Juneteenth concert, which was bumped by last weekend’s stormy weather.

Red-hot emcee BRS Kash, aka Kenneth Duncan Jr., last week dropped a new single that will be heard on EA Sports’ next Madden NFL update. The track clips at the heels of his official debut album from earlier this year, Kash Only.

The song, produced by Pooh Beatz and Murda Beatz, shows off clever references to pro football throughout and a beat that promises to pump up even the casual listener.

Plus, anyone who can sample the Shangri-Las’ “Remember Walking in the Sand” and turn its mournful refrains into a motivational bop is a winner in our book. That dramatic wailing refrain at the beginning, pulled from the emotional crescendo of the original song — and the lyrics punctuated by repeated “Oh no, oh no,” is like seeing a bowl of fruit for the first time through Picasso’s eyes.

OK, that may be hyperbolic, but this is a great song to run to (or sit on your couch making video game characters run) as the case may be.

Tom Grose & the Varsity: “Nothing Can Stop Us (Atlanta’s Air Force)”

If you’ve been a vested Atlanta fan for any length of time, you know the agony and ecstasy for rooting for local sports teams. You’ve felt the deep disappointment of faithfully following a team that shines blindingly bright until the last moment of the season, when it falls from glory in a way that defies all belief (Super Bowl 2017, anyone?).

What a rush this season has been, then, as Atlanta’s oft-discounted Hawks thrilled fans and shut down naysayers by reaching the NBA’s Eastern Conference finals. The last time the Hawks won an NBA championship was in 1958, and the team was based in St. Louis. That’s a pretty bleak stat, but the Hawks have come painfully close to clinching the final victory once before. That moment is as remembered in the cheesy but catchy ditty “Nothing Can Stop Us (Atlanta’s Air Force),” our Vintage Track of the Week.

This theme song, which evidently marked the Hawks’ first officially sanctioned music video, is performed in full 1980s panache by Tom Grose & the Varsity. This nostalgic  fever-pitch video memorializes less of the band itself and more of the spirit and skill of the 1986–87 team, led by Dominique Wilkins.

As the lyrics go: “If you’re a Laker, if you’re a Celtic, we got a big surprise planned for you!” That warning goes for the Bucks, too.