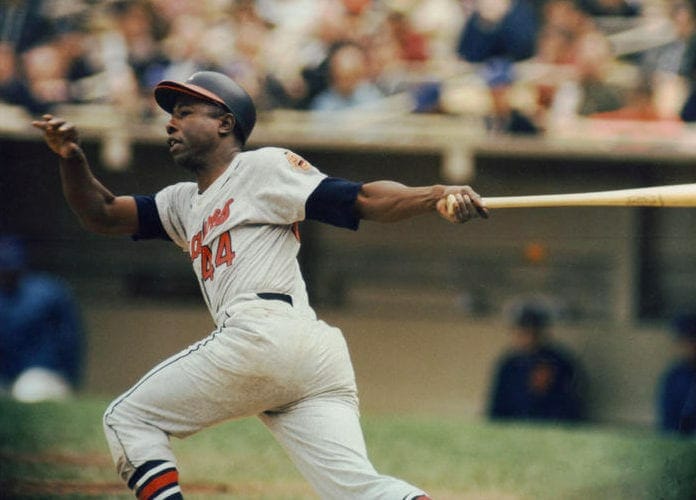 Our vintage track this week is a tribute to home-run king Hank Aaron. (Courtesy National Baseball Hall of Fame Library)

Sure, “Sanity” is technically a breakup song, but it has a 2020 mood. “I’ve got to get up, get up, get up right now for my sanity so that I can breathe.” Those lyrics, playing off the “fake it till you make it” mode, might be the most common refrain from 2020, as we struggled to put one foot in front of the other and show up for work, family and other obligations amid collective trauma wrought by the pandemic, social upheaval, economic crises, police brutality and more.

“Sanity” combines R&B, jazz and some smooth psychedelic interstellar vibes to encapsulate that endless conversation inside your head, the sad and broken pep talk in the face of grief. The delicate vibrato in Lola Ladaé’s rich alto effortlessly conveys vulnerability and emotion, reverberating with resilience. “What do you lose when there’s nothing to lose?” she asks, as the soft, swirling, meditative rhythms lull us into a kind of heartbroken calm.

Ladaé, a St. Louis native, has called Atlanta home since 2018. She previously played bass with the Tulips. In 2019, she founded Basement Unplugged, a “secret concert series” with live music by up-and-coming musicians, featuring local art, DJs, food and vendors.

The anthem “WFS” is both evergreen and entirely timely, catchy in its 1980s and ’90s pop-punk but with a biting, distinctly post-Y2K flavor. It references poverty, housing inequity, gun violence and health care with a simple refrain that ends with the title line: “We let people go hungry, we don’t even try, cause we f**king suck / Gather around little children and let us tell you the story of how we f**king suck.”

Lesibu Grand formed in the summer of 2017 after the fortuitous meeting of bandmates and cowriters Tyler-Simone Molton and John Renaud at The Earl. “WFS” premiered in September but was recently recut and re-released as a mash-up of a November livestream and footage from the January 6 attack on the U.S. Capitol. Sadly and scarily, as one person notes in the comments, the terrifying footage and the song’s message go together like peanut butter and jelly.

If its new single is any indication, NRCSSST isn’t messing around. That makes sense since the new band is led by Stephanie Luke, the drummer and singer from the legendary Atlanta punk rock/garage band The Coathangers and Dan Dixon from PLS PLS and Dropsonic. The self-titled debut album drops February 12; this first listen, for those of us elder-lennials in the room, may send nostalgic shivers of early 2000s Strokes and Arcade Fire running up our spines. There’s the solid guitar riff, an anthemic quality of the plummeting headlong into toxic, all-consuming love.

The dire, deadpan humor that crawls from dank and dark relationships is in the same family lyrically as the gloriously misanthropic “No Children” by the Mountain Goats. “Tied to the tracks that you laid down / That train never comes to this bullshit town . . . I extend my hand — it’s around your throat.” Aw, yeah! And with some surprising and energetic musical twists and turns along the way, threaded together by an unrelenting drumbeat, this catchy doomsday ditty invites replays aplenty.

In honor of civil rights icon and Braves great Hank Aaron, we dusted off this likely forgotten tribute jingle for our Vintage Track of the Week. “Move Over Babe” captures the zeitgeist of early 1970s sports, as “Hammerin’ Hank” chased Babe Ruth’s home-run record despite virulent racism and death threats. Aaron died January 22 at age 86.

The 1973 track, sung by former Detroit Tigers pitcher William Grover Slayback, played regularly on NBC’s Game of the Week until Aaron hit his historic 715th homer. The game was against the Los Angeles Dodgers on April 8, 1974, at Atlanta-Fulton County Stadium. The song itself is relatively simple and straightforward. What more do you need than, “When the Hammer hits one out, that’s what baseball’s all about.”