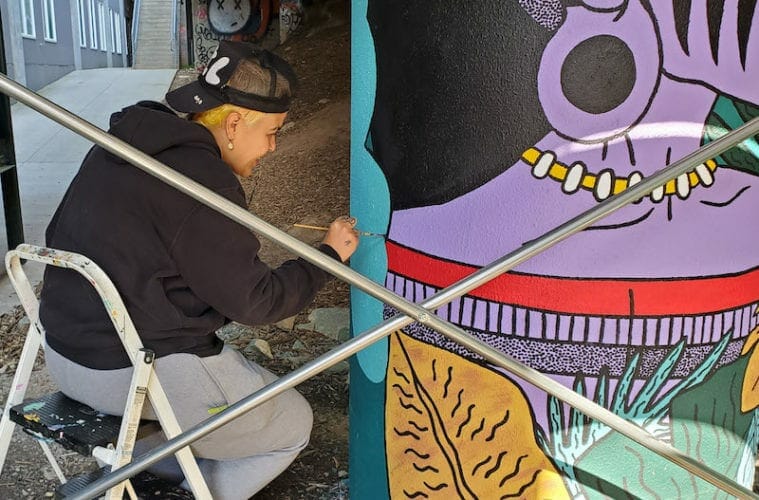 Lisette Correa, aka Arrrtaddict, works on her "Somos Borincanos" mural at the Edgewood Avenue. It celebrates the Caribbean's Taino people. (Photo by streetartmap.org)

If you’re looking for a reason to walk the Atlanta BeltLine, we’ve got five for you: the five new installations in Art on the Atlanta BeltLine’s third annual BeltLine Walls mural exhibition. Each year a jury chooses artists to activate walls throughout the BeltLine corridor.  This year’s mural cover bridges on the Eastside Trail. Murals from volumes 1 and 2 are still up, so expect to see these for the next two years or so.

Why bridges? “Bridges are connection points,” says Art on the BeltLine’s Miranda Kyle, “and I wanted to create iconic spaces our communities could use as both wayfinding and destinations. I wanted to push the boundaries of mural art and encourage the artists to flex their creative muscles and rise to the challenge of painting on complex architectural forms.”

Kyle encourages people to spend time with each mural. “There is so much nuanced storytelling folded into each of them,” she says. “The scale of each bridge really allowed the artists to explore their concepts.”

We recommend this route for viewing the five murals. It’s about two miles long.

The Virginia Avenue Bridge looms once you’re a few steps into the Eastside Trail, south of Piedmont Park. Alex Brewer (aka Hense) has transformed the concrete monolith into an immersive art installation. He’s internationally famous for abstract patterns in which colors and shapes dance gleefully across the façades of huge buildings.

“The architecture or structure generally guides the path forward for my public work,” Brewer says. “I did create a few preliminary drawings for the bridge. However, because it’s such an expansive space, I chose to start with no preconceived reference. The location didn’t necessarily influence the color choices or direction. I feel like this project relates more to what I’ve been doing in the studio lately. I also think the space influenced the overall scale of the forms used in the composition.” 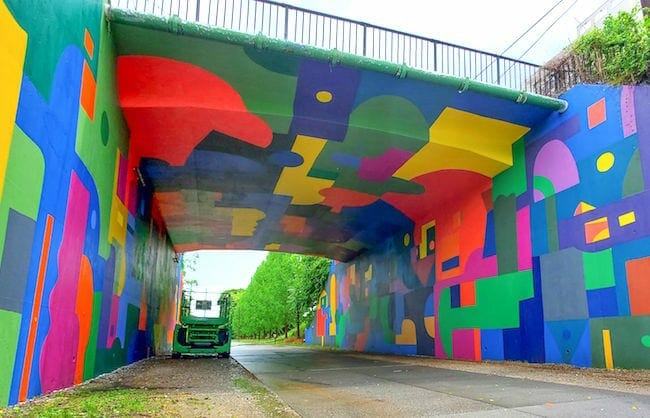 Continue south on the BeltLine and you’ll pass Ponce City Market, Paris on Ponce and the onetime Murder Kroger (Google it). Take a ramp to the left or the stairs to your right and you’ll be drawn into the world of a giant graphic novel titled Gateway to Change: Abhiya’s Way from Brandon Sadler (who signs his work as “Rising Red Lotus”). Sadler’s trademark visual vocabulary can be found on murals throughout the city. They feature a mash-up of Asian calligraphy and graffiti influenced by a year of living in South Korea.

Like an ant crossing the page of a comic book, you’ll follow a protagonist named Abhiya on her journey through four seasons, learning a new life lesson in each. Sadler says he created Abhiya to act as motivational spirit guide to remind us how to approach challenges. The name “Abhiya” has several interpretations. Sadler likes theSanskrit, which means “gift from God.”

In the mural’s final panel Abhiya emerges from her odyssey saying ,“Enjoy your life,” flanked by three enormous koi, which are often symbols of prosperity and good fortune. 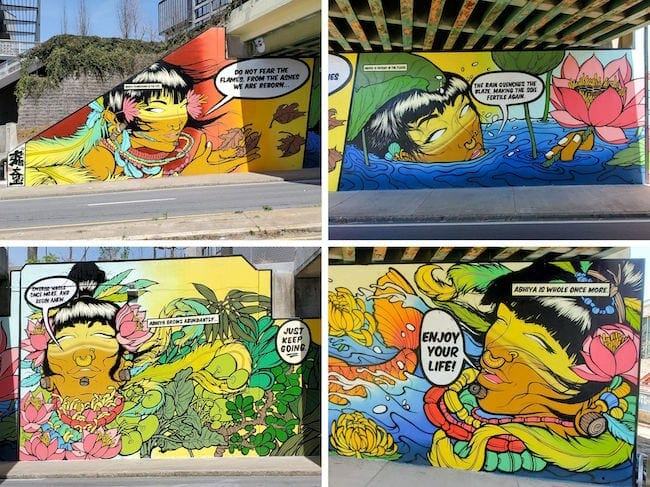 The four panels of Brandon Sadler’s “Gateway to Change: Abhiya’s Way,” at the North Avenue bridge. (Photo by streetartmap.org)

You might want to grab a beer before the next stop. Then take the stairs to your left to see Thrive, a mural by Ricardo Moody of Hattiesburg, Mississippi. It fills both sides of Ralph McGill Boulevard, and speaks to one of the BeltLine’s goals: to connect the neighborhoods it touches.

Pink birds symbolize those 45 neighborhoods. “Part of the creative process includes times where my mind drifts or my imagination wanders,” Moody says. The ‘imaginative drift’ reminds me of birds. They symbolize the freedom and movement of creative thought processes.”

Lines painted on a contrasting background function as a metaphor for people within a communal setting, Moody says, unique and different yet similar and connected. 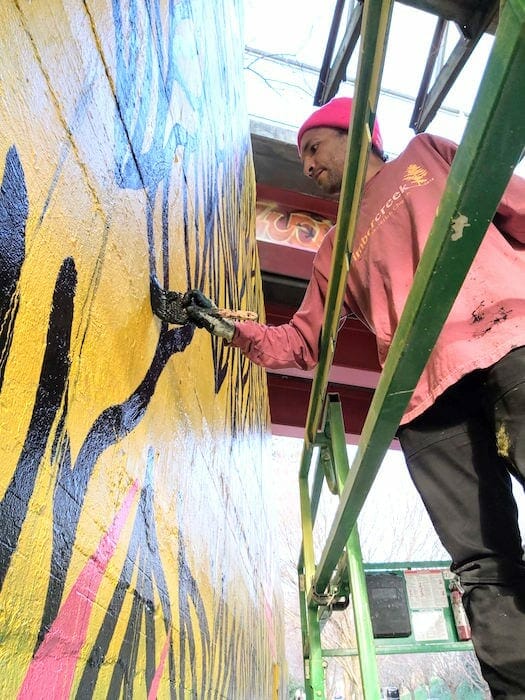 Ricardo Moody works on “Thrive,” found on Ralph McGill Boulevard, which runs beneath the BeltLine. (Photo by Sally Moody)

Continue south to pass beneath the bridge at North Highland Avenue. You’ll see several columns with masks and other symbols. This is All in Together by Jenevieve Reid. “My favorite symbol is the infinity,” she says. “It’s a recurring remembrance that our purpose is to remain connected to the infinite in the many expressions of our human experience.” Reid is no stranger to the BeltLine. You’ll find an earlier mural at Fulton Terrace in Reynoldstown.

All in Together was conceived as a landscape for a large wall, she says. When faced with painting columns, she decided to go vertical and her storyboard became poles resembling totems.

“My initial design was inspired by my interest in masks as representation of the spirit world, and the cultural diversity of Atlanta becoming a city built upon an ancient site,” she says. “The idea of a bridge connecting places once uneasily accessible from a higher point. Crossing from one level in consciousness to another. Unifying spaces, unifying minds. Supporting your fellow for the greater good of the whole, for the benefit of the future. Bridges are like gateways in that they are points of connection.” 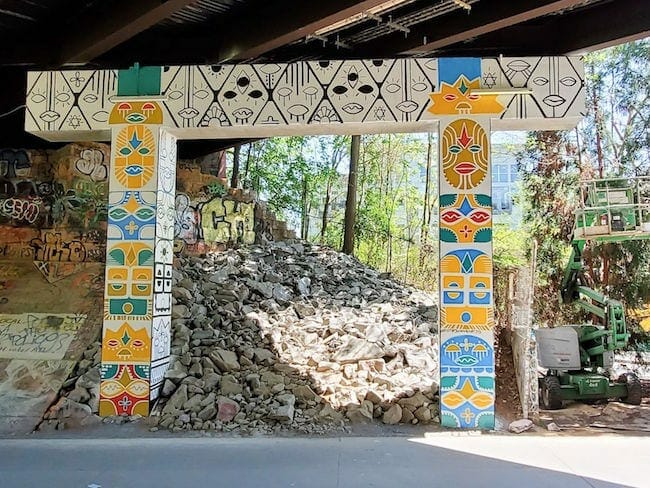 Jenevieve Reid’s “All in Together” is beneath the North Highland Avenue Bridge. (Photo by streetartmap.org)

Walk toward Edgewood Avenue and you’ll find the final  mural. Lisette Correa, aka Arrrtaddict’s Somos Borincanos takes you into Caribbean history and documents the all-female Taino tribe on La Isla de Borikén.  The Taino are  indigenous to Puerto Rico and other Caribbean islands.

“Taino symbols are found all over the island,” says Arrrtaddict, a proud Puerto Rican, “so it’s something I always saw and was interested in learning more about. I believe to be grounded in who we are today we must first remember our roots.” She says she recently took a DNA test and learned she’s 12.7 percent Taino.

Somos  Borincanos is dedicated to her grandmother, whose portrait is seen in the center of three bridge support pillars. “She went through many struggles and the older I got, the more I learned about her struggles,” Arrrtaddict says. “I was constantly amazed by her resilience.” 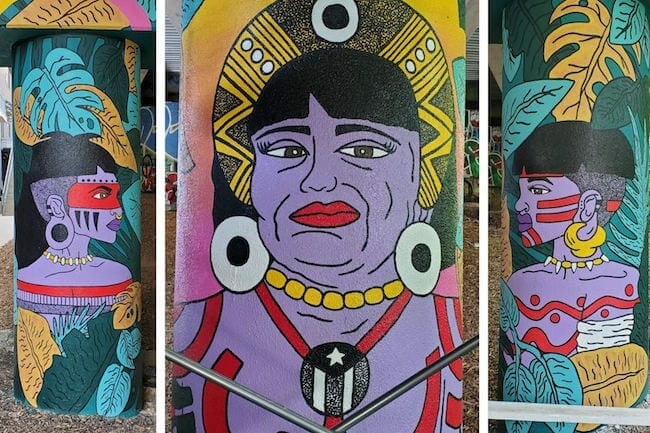 She wants viewers to take away several truths from her mural: that the Taino  were in the Caribbean — Puerto Rico, Cuba, the Dominican Republic, Haiti and Jamaica — before Columbus and that he didn’t discover anything; the impact that Taino still have on American culture; and that the Taino tribe is far from extinct.

“I want people to feel the love and beauty that came from this tribe,” she says. “This is how the people of Puerto Rico still are. Beautiful, loving, good people.”

Art on the Atlanta BeltLine has issued an open call open for next spring’s Volume 4 of Beltline Walls. Proposals will be accepted through noon May 28. Details HERE.