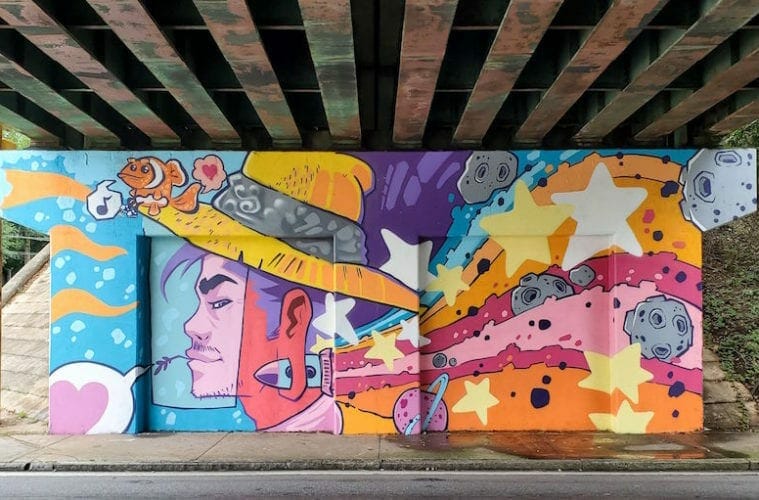 "I wanted to paint all walks of life and include communities of color," Killimari says of his Laura Patricia Calle Grant murals in Decatur. Note the Asian-looking subject and the clownfish atop his hat. (Courtesy of streetartmap.org)

Today in street art: The ever-expanding universe of the muralist known as Killimari

In the past decade, Killamari and his spray cans have traveled throughout Atlanta’s neighborhoods. He’s a big name in the street-art community, but few know the artist as a full-time illustrator and designer in an animation studio.

His most recent murals went up in Decatur, and you’ll find his quirky characters and their monster-like compadres along on the Atlanta BeltLine, building façades, bridge underpasses and corporate offices. 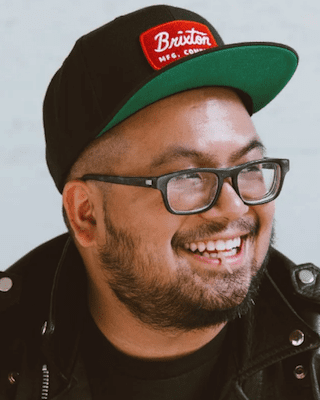 Killamari, 36, is the founder and leader of the Lotus Eaters Club, a pack of muralists, animators, illustrators and designers. Together they tackle large-scale murals and have worked with Living Walls and the Forward Warrior Project. “Although street art is competitive, I’ve always enjoyed working collaboratively,” Killamari says.

He won Living Walls’ 2019 Laura Patricia Calle Grant  — the first time it went to a street artist. He painted representations of the LBGTQIA and Asian American communities, saying, “I wanted to paint all walks of life and include communities of color.”

His mother is Vietnamese, his father Cambodian. He kept out of politics until Donald Trump began fostering anti-Asian and anti-immigrant hate. “As a father, I care about these issues because they impact my family directly,” he says. Despite mixed feedback and sometimes aggressive attacks, Killamari continues to push anti-racism and voting rights in his art. 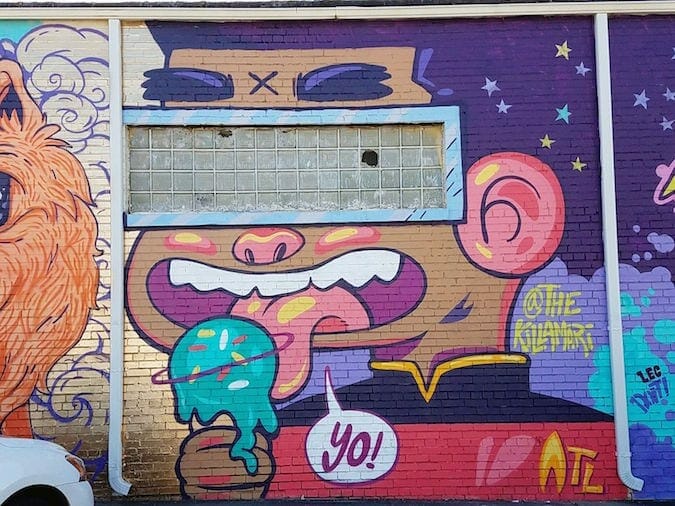 “I was hanging out with my buddy Camille and my sketchbook one day, just doodling. I drew this little grim reaper dude and his cloak had tentacles coming off of it. She was watching me draw and was like ‘Yo, that’s a KILLAMARI not a CALAMARI.’ That was pretty much it. I was 18 at the time.”

“I love the physical aspect of it. Murals are my tai chi in the park. I like the big gestures that require me to hold my breath and use my whole body. Even if it gets physically exhausting it never feels like work. I’ll take painting a mural over sitting at a desk any day.”

Living Walls Project. For the Laura Patricia Calle Grant. These two murals celebrate diversity and depict the Asian American and pansexual communities with colors inspired by the pansexual flag and a clownfish known for its ability to switch sex.

This collaboration with Chris Wright pays homage to the late rapper MF Doom.

Forward Warrior. A collaboration with Chris Wright, the mural pays tribute to the late British American rapper Daniel Dumile, known by the stage name MF Doom. It depicts Doom in his signature silver face mask, with a supervillain persona.

Joystick Gamebar. A collaboration with Muros, a global art activation agency. It honors Edgewood Avenue and its many small businesses.

Keep up to date on all things Killimari through Instagram (@thekillamari).