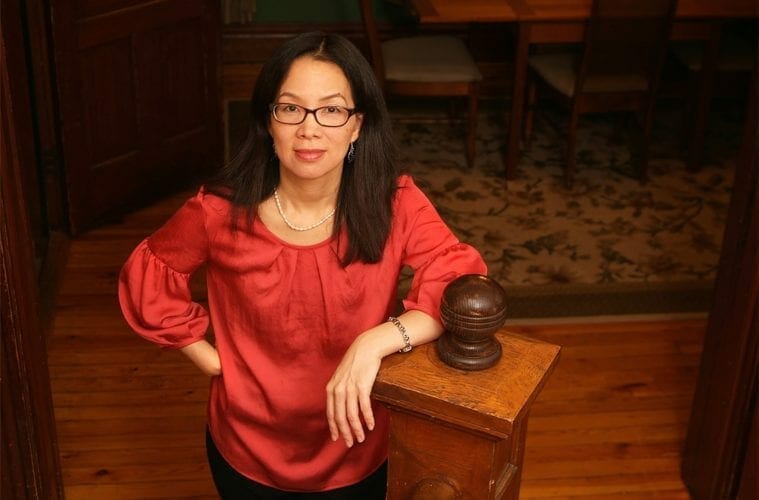 Adrienne Su's new poetry collection, "Peach State," builds from her memories of growing up in Atlanta and the food she encountered. (Photo by Guy Freeman)

Its evocative, digestible poems take readers on a culinary trip from the Atlanta’s suburbs of Su’s childhood, to the explosive Buford Highway international food scene, all the way to her parent’s China and back again. There are villanelles that pay homage to chopsticks, verses that make glorious instant Ramen noodles, words that eulogize a food-court ice cream shop and sanctify what Su calls “the chow mien years” of her youth.

Peach State gives readers a tour of home kitchens, grocery stores and Chinese restaurants, gives them a taste of “Sizzling Rice Soup,” “Black Sesame” and “Oolong” and invites them to travel the beautiful tension between Su’s two culinary and cultural histories. 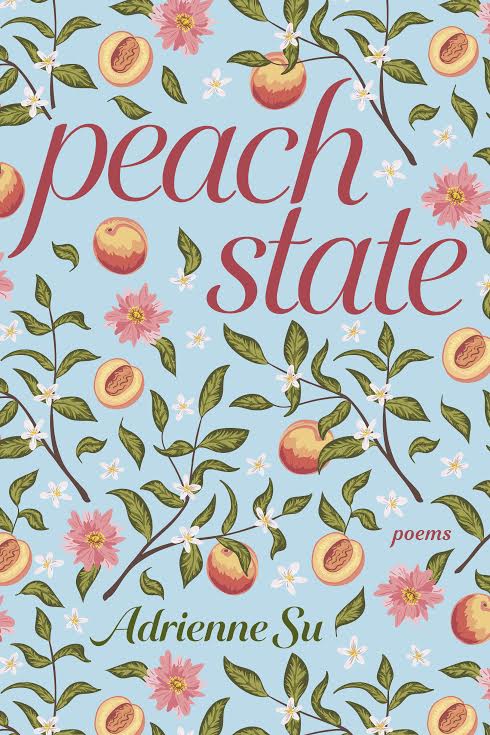 Asian American author and artist Chanel Miller recently wrote that “in many Asian cultures, feeding is the strongest way of saying ‘I love you.’” Peach State, in its rendering of the food that feels most like home to its author, manifests that sentiment. It’s a love letter to the meals and memories that connect Su to her ancestors, to her parents and her children, to China and to the American South.

Su is the poet-in-residence at Dickinson College in Carlisle, Pennsylvania. She recently spoke to ArtsATL about how food inspires her poetry, her favorite Chinese dishes and finding the miraculous in the mundane.

ArtsATL: You’re from Atlanta. You were born and raised here, though you live in Pennsylvania now. When you think about growing up, how do you think the city influenced you turning toward poetry?

Adrienne Su: I grew up in suburbia, and I think a lot of kids in suburbia — it’s idyllic when you’re a little kid, and then as you get older, you get kind of annoyed. You kind of wish there was more community. And I didn’t feel like I could find poets, really. At the time — though it’s different now — there weren’t a lot of people who came to Atlanta for the poetry readings.

I was lucky in that I had some great teachers, and I found a workshop at Georgia State that had been created through the initiative of a couple of people there who were offering these workshops for high-school students. That was really exciting. But how Atlanta led me to being a poet? I don’t know if it did.

ArtsATL: When you come from a suburb, it can feel like coming from no place, because everything is generic. It’s strip malls and chain restaurants. So you have to imagine a place into being. Maybe having to do that is itself a kind of poetic thinking. And given that that’s kind of the relationship you had to the suburbia you grew up in, why did you consider Atlanta the right framework for your new collection?

Su: I was always going [back] to Atlanta. And if it weren’t for COVID, I would still be going there all the time because I have family there. And I think I was both excited about how much better the Chinese food is now than it was when I was kid, and what that means about larger changes in Atlanta’s population.

It also made me think about the experiences I had with other Chinese Americans [growing up]. We didn’t live near each other, necessarily. There was just this kind of loose network of Chinese Americans because there were so few. That’s kind of gone now because there’s no longer a tiny population. I’m glad it’s not tiny, but I also don’t want that time to be forgotten.

So I just kept on going, in my head, to Atlanta, while working on this [collection], and it just turned into Peach State. I’m like a lot of poets in that I had no idea what this was going to be called until I had finished writing it. I knew it was Atlanta-centered, but as you know, a lot of the poems don’t mention Atlanta, and you can’t really tell that they take place there if you look at them by themselves. But then once they’re together in the book, maybe it becomes clearer. 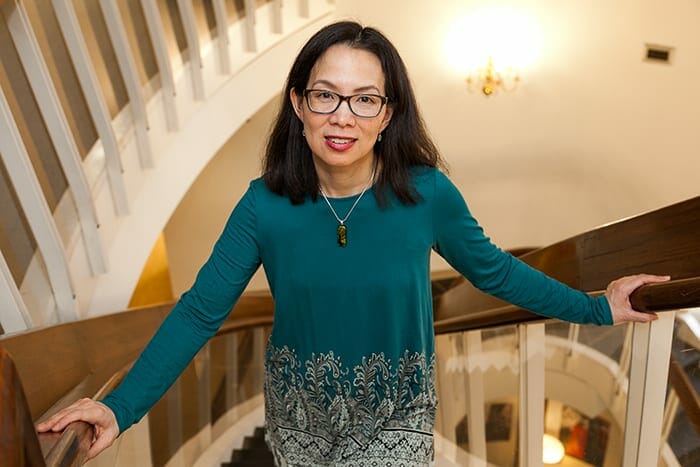 When Adrienne Su’s parents moved from China to Atlanta, they improvised their native cuisine because of a lack of ingredients and the fact there were only four Chinese restaurants in the city. (Photo by Carl Socolow)

ArtsATL: You dedicate this collection, in part, to your parents. Their history and heritage is this invisible framework that holds all of these stories together. What can you tell us about them as far as how they relate to the collection? What were some of their culinary traditions as you grew up?

Su: They arrived quite early. My dad arrived in 1948 and my mom a bit later. So they were used to not being able to eat Chinese food. There were, according to my parents, four Chinese restaurants in Atlanta in the early years. I don’t know if that means when my dad got there, when my mom got there, but they kind of had this joke going where they’d say, “Yeah, there were four Chinese restaurants when we got here, and now there are 400!”

I had delved into cookbooks written in English on Chinese food published in the ’60s and ’70s because I wanted to imagine what people were who were trying to cook Chinese food — whether they were of Chinese descent or not — what were people in the U.S. cooking when they wanted to make Chinese food?

And that’s what we ate because you couldn’t get so many of the [authentic] ingredients. My parents were never snobs about [Chinese] restaurants trying to appeal to an American audience. That’s all we had, so we enjoyed it. And that’s why there are poems about things like Mongolian beef, and hot and sour soup, those sort of mainstream dishes you see. We loved them.

ArtsATL: Was there ever a sense of homesickness that you think maybe your parents navigated through the food they did have access to?

Su: I think there had been, maybe before I was born. They were in Atlanta for quite a while before they had kids, so it was mostly in the form of stories I heard from them.

For instance, they couldn’t buy tofu. They got together with friends and mail-ordered the ingredients for making tofu from New York, Chinatown. But then everyone had to get together and do this giant project. I don’t know how to make tofu — apparently it’s not easy. And of course, they had to probably order so much, and then once it’s made, it doesn’t keep that long. So it was probably this huge thing where all these families got together and did this thing, just to have [an ingredient like tofu] briefly.

There were always adaptations. After I published my poem about the fried rice with hot dogs in it, I heard from other Asian Americans, “Oh, that’s what my mom did, too” because you couldn’t get Chinese sausage.

Su: The recipe does feel a little bit, to me, like a poetic form in that it has that structure. And why not a story, really? You start with this pile of stuff — I love it when you look in your fridge to fix something to eat, kind of pick up this and that, and an hour later you have a meal — and you think, “Wow, I just made something out of nothing.”

And a lot of the time, that doesn’t get written down. People just create something. They eat it. And then it’s forgotten. So in that way, a recipe might actually be a story that should be written down. 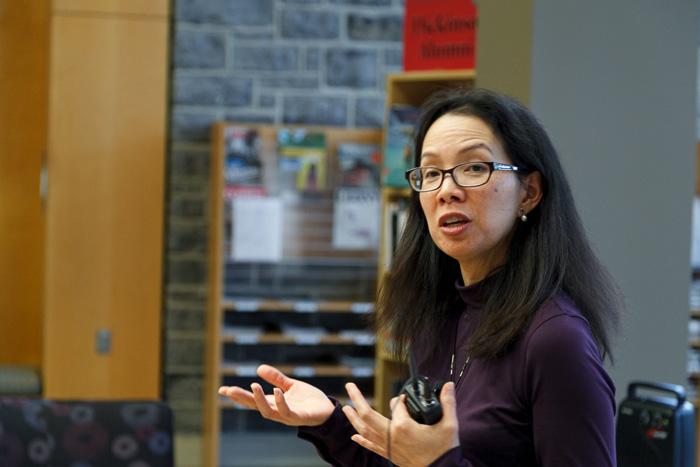 Adrienne Su is the poet-in-residence at Dickinson College in Pennsylvania. Her poetry, she says, is the search to show the miraculous in everyday life.

ArtsATL: How do you think the creativity required to be a generative poet has made you a more creative cook?

Su: There are days when it’s the opposite in that I want to put my energy into a poem, so I just want a recipe that I can just blindly follow to save time. But other times, having put a lot of thought into the food, I will then turn around and do something differently [in a poem].

My poem, “On the Recommendation That American Adults Consume No More Than One-Quarter Cup of Rice, Twice a Week,” I was mad about that for years. I just kept on going, “You can’t eat rice? Really?”

That poem took me a long, long time to figure out how to write. I tried to write that poem many times. After I wrote it, I suddenly felt free from that oppression. And I actually did start doing some of the things [with food] I said in the poem. So now that I’ve issued my rejoinder to the anti-rice coalition, I actually don’t have to eat as much rice [laughs].

ArtsATL: You’ve mentioned that in your poetry, you’re really interested in looking at and elevating the mundane in our lives, the quotidian, rather than the grand and romantic — small things like your everyday chopsticks in “After the Dinner Party,” or a container of Chobani yogurt in “Wakefulness” that don’t become beautiful until you turn them into poetry. Can you talk to me a bit about that?

Su: I think I have followed the example of many other poets. I just think that reading poems in which the ordinary takes on all this other power has trained my eye.

Also, in those early years of becoming a writer, there’s a lot of excitement and romance around creative activity. And then you realize, “Oh, my life is really kind of the same as everybody else’s. I don’t really have any exceptional experiences.” So then you have to figure out, “Well, am I just going to not write, or am I going to try to show what is miraculous in the everyday?” And then, part of writing — everybody learns this, too — you just keep trying, and sometimes the yogurt cup becomes something else.

ArtsATL: And what’s next?

Su: It’s been a really weird year, so I haven’t really focused on getting the next project started, because it’s felt like an emergency for so long. One of my big questions to myself has been, “Do I still get to write about food? Do I have to let go of it?” Because I still want to, but I also want to make sure I’m pushing myself not to repeat what I’ve already done. But then maybe food has potential in other ways.