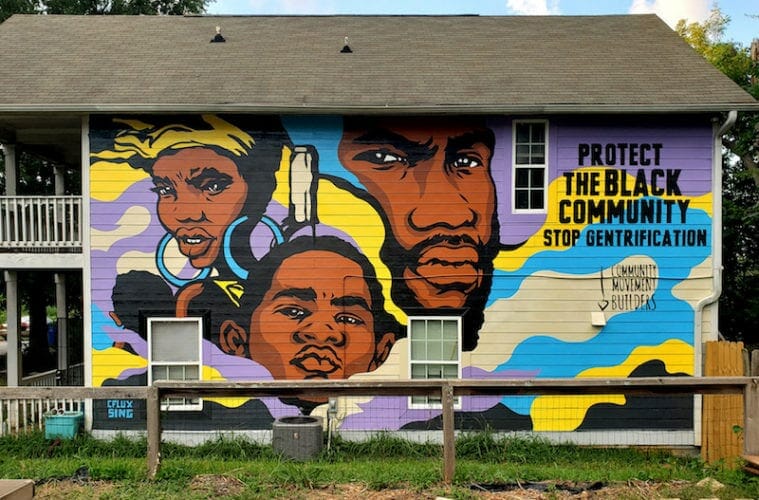 The C. Flux Sing mural "Protect the Black Community" is on Welch Street in Atlanta's Pittsburgh area. (Courtesy of the artist)

Atlanta artist C. Flux Sing has a keen sense of color. He sees it as changeable, like a 1980s mood ring. You’ve seen his work in #Kaeperbowl (2019) and Forward Warrior in Inman Park and Cabbagetown (2019) and, perhaps, at ArtsXchange earlier this year in his first solo exhibition, titled Heavy Clouds. So what’s with all that color? Sing (full name: Craig Flux Amòsún Singleton), 43, has a broad perspective on “image” and believes in the importance of “why?” He tries to understand people’s experiences and energy, with styles that touch on cubism, surrealism, African and fresco. His early work featured thick lines that have since become curves and attitude. His vibrant colors are intentional. He loves drawing black people, calling it “colorizing my people” and always asks, “What’s going to convey the energy of what’s to be said?”

His lines exaggerate emotions — extending the mouth, nose and limbs (a style inspired by many, including Atlanta-based painter Maurice Evans). “The exaggeration is almost like a curse word because it has emotion and action behind it to live,” Sing says. “You know how serious a situation is. You understand the power.”

Sing grew up in Laurelton, New York, and was influenced early on by comic books, comic strips (shoutout to “Calvin and Hobbes”) and coloring books. He was 8 or 9 when he saw the book How to Draw Comics the Marvel Way. He wasn’t patient, so he’d wing it. At the High School of Art and Design in New York, he used tracing paper and a protractor, expanding his illustrations into “experimental” graphic design. He was one of several high schoolers to win a $1,000 portfolio competition run by The New York Times and the Advertising Club of New York. Sing has visual communication degrees from the Art Institute of Atlanta and American Intercontinental University. Laid off within four months of landing his first graphic design job, he worked for the next 10 years as an illustrator for Rolling Out. He began painting in 2005.

Pre-pandemic, he did art for the National Black Arts Festival, BET’s The Twenties premiere art showcase and City of Ink’s 13th anniversary. “Virgil,” a mural inside Virgil’s Gullah Kitchen & Bar in College Park, is named for Virgil F. Smalls, the late father and father-in-law of owners Gregory and Juan Smalls.

He’s been commissioned by a homeowner to create a small mural acknowledging the injustices going on, and is still trying to process pandemic and protest feelings in “real time.” See more of his work and thoughts on Instagram. Sing is sitting tight to see what the summer will bring. He can’t tell it all yet, but a West End project is in the works. “No matter what,” he says, “I’ll keep on inspiring to help us keep going.”