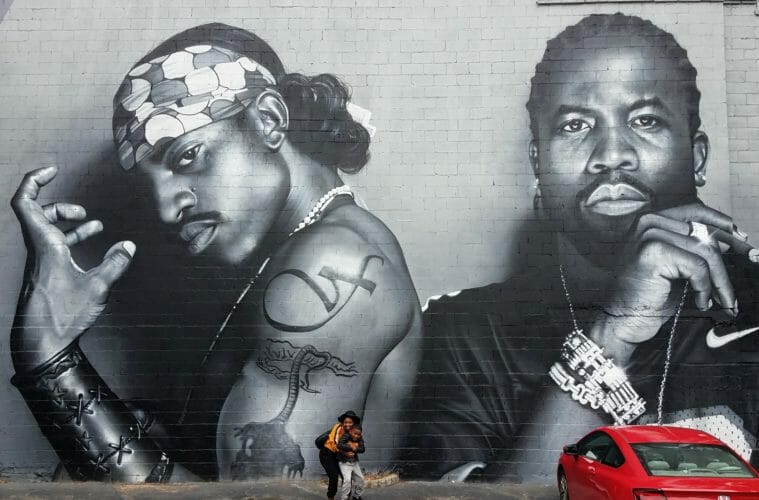 This jaw-dropping mural of OutKast is hidden behind Planet Bombay restaurant in Little Five Points. (Photos by streetmap.org)

Today in street art: Discovering the best out-of-the-way murals on the north side

When you attend a museum, you expect the artwork to be conveniently arranged for your viewing pleasure.  Unfortunately, the streets of Atlanta aren’t a museum, so if you want to enjoy Atlanta’s fabulous street art, you’ll need to find it. Luckily, some of the murals are easy to find, located in high profile, high traffic areas. But some of the city’s best street art is hidden in out of the way places that you would never see just walking down the street. Today’s article is your treasure map to some of these less obvious gems on the north side of Atlanta. Next month’s article will be your guide to the south side.

This jaw-dropping photorealistic masterpiece (above) presents perhaps the most dramatic reveal of any mural in Atlanta. After a steep walk down a long, narrow claustrophobic sloping alleyway, the huge mural featuring Atlanta hip-hop duo OutKast explodes into view. Made up of East Point-born members Antwan “Big Boi” Patton and André “3000” Benjamin, OutKast has racked up six Grammy Awards. North Carolina-based artist Jeks painted this gigantic portrait based on a black and white photograph taken by Jonathan Mannion. Jeks’ work ranges from colorful graffiti to monochromatic photorealism. Mannion’s camera lens is a window into the world of hip-hop and R&B. This mural was created for the OuterSpace Project festival in 2019.

Typically, only those who park in the Modera Prominence retail parking garage would see these seven murals that parody our sometimes-dysfunctional relationship with technology. Veal is known for his use of humor and satire (sometimes subtle, sometimes not) in his murals, which often comment on various idiosyncrasies of our society and politics. For example, he once painted an image of Alfred Hitchcock on the BeltLine with the title “The Birds” as a spoof on the invasion of Bird scooters. 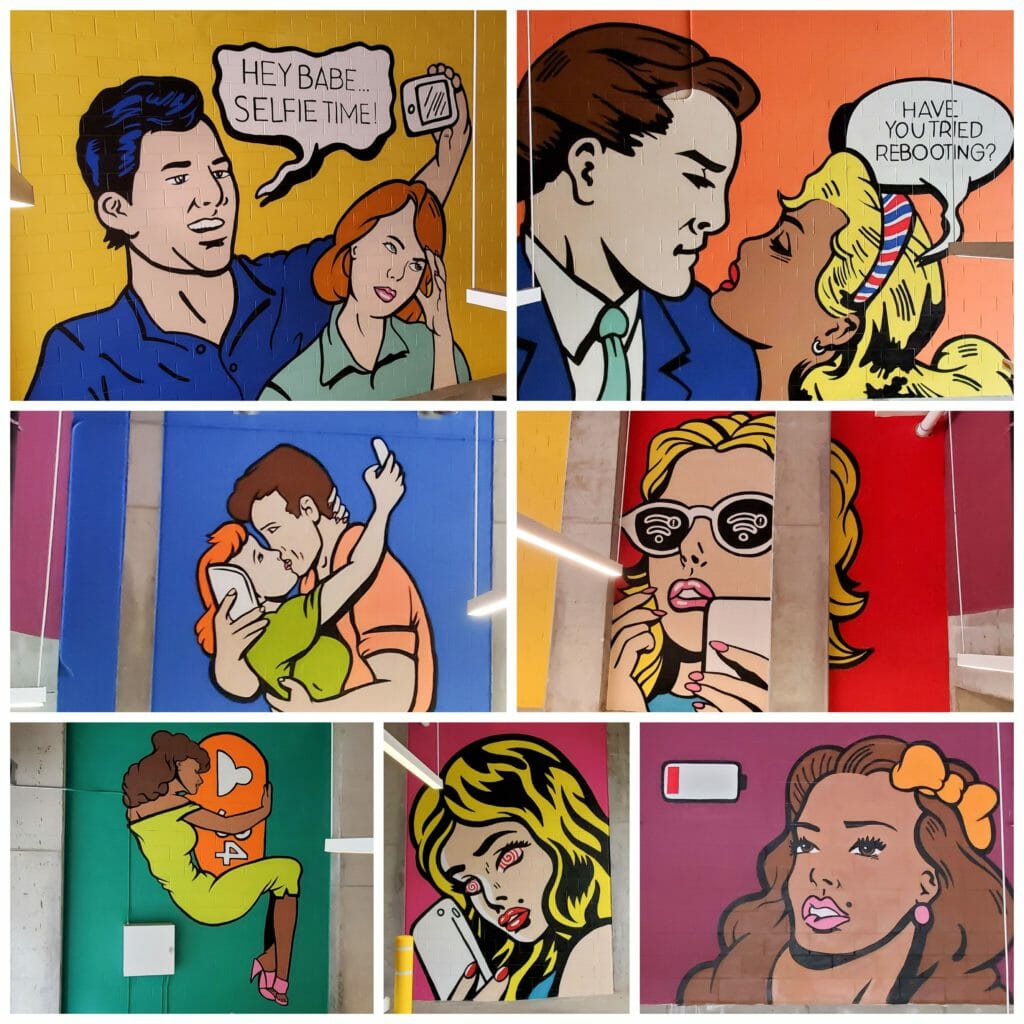 Location: Inside the entrance to the retail parking garage of the Modera Prominence Apartments, 3699 Lenox Road in Buckhead. (Pedestrian accessible) View on Map

Those of us old enough to remember “big hair” know about the Limelight Disco in the heart of Buckhead during the 1980s. To this day, the nearby supermarket is still called the “Disco” Kroger. Dr. Dax and The Loss Prevention teamed up to memorialize the “Studio 54 of the South” with this giant mural behind the shopping mall that hosted this cultural icon. Dr. Dax is one of Atlanta’s most prolific street artists and is known for his signature bubble letters. The Loss Prevention gave us many of our city’s large scale murals such as the 70-foot tall “Hero” mural featuring John Lewis downtown. 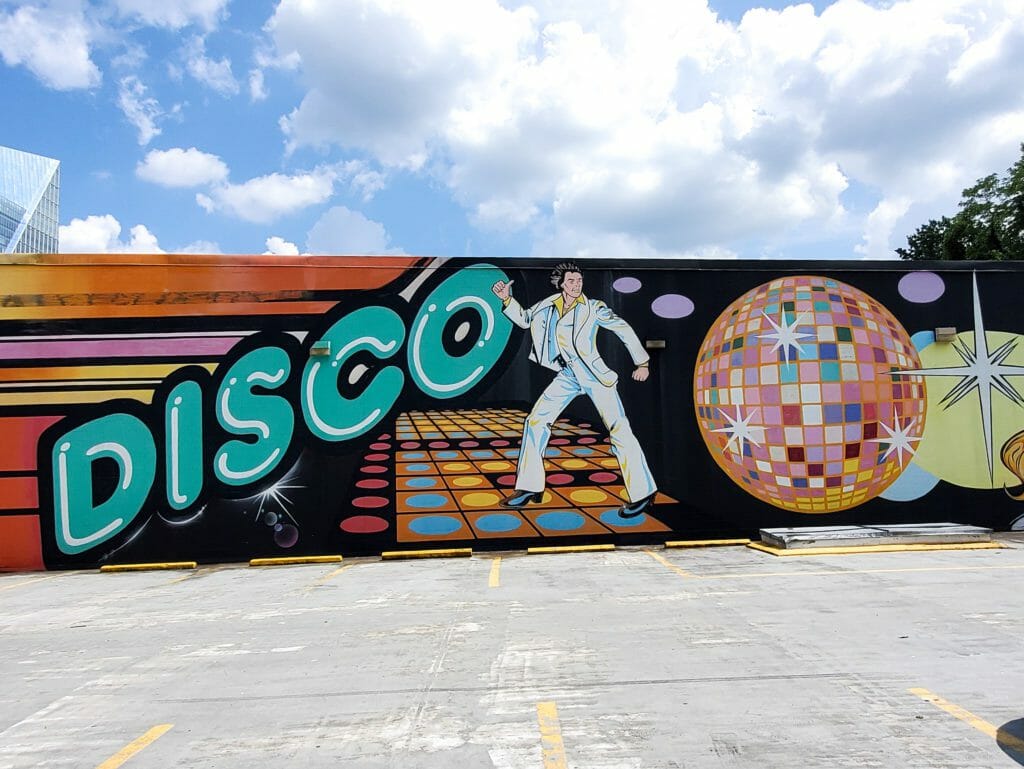 Location: In the back parking lot of Binders Art Supplies in the Piedmont Peachtree Crossing mall, 3330 Piedmont Road, Buckhead (Note: Google Maps will try to take you to the loading dock in the level below the parking lot.)  View on Map

Many visitors to Armand Park might be completely oblivious to the fact that this happy little wall of brightly colored contours was painted by Alex Brewer, an award-winning, internationally acclaimed artist who has painted monumental, large-scale murals and total building facades in prestigious locations all over the world. The artist’s abstract style incorporates an array of shapes, forms, lines and colors to create a vibrantly dynamic shifting visual landscape across his building-sized canvases. Other local examples of Brewer’s work include the Westside Cultural Arts Center and the Virginia Avenue bridge on the Eastside BeltLine. 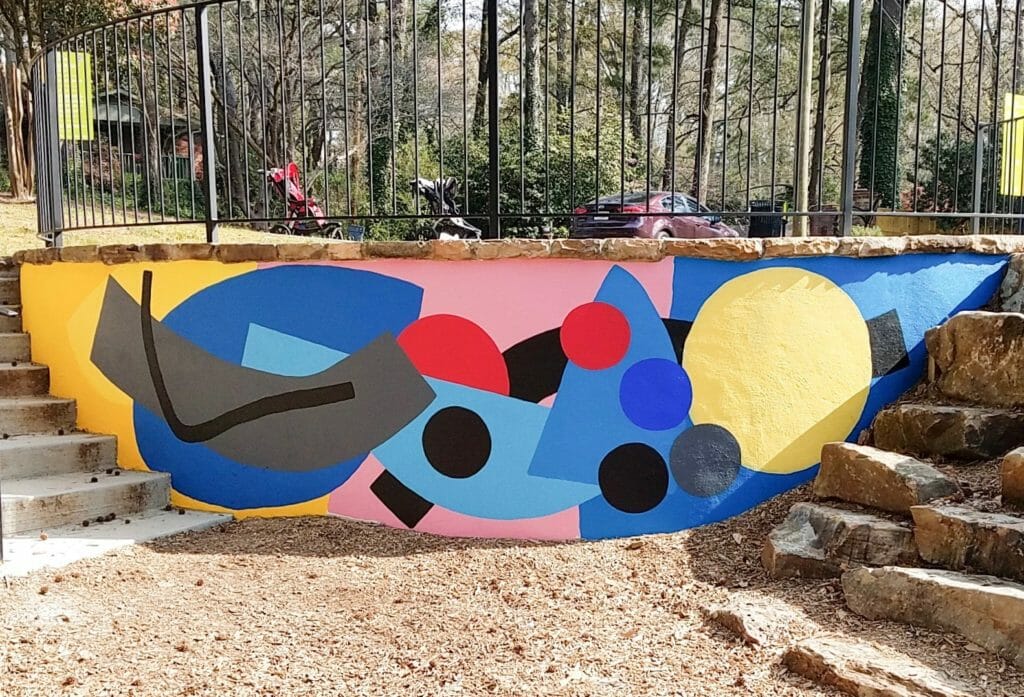 Location: Armand Park at the end of Armand Road. The mural is on a wall facing away from the cul-de-sac. Go into the park and down the steps. View on Map

Bogotá, Columbia native Angie Jerez is an illustrator, painter and muralist who features everyday objects and scenes in her artwork through her pastel-based palate and detailed linework. Typically, only the residents of the 12 housing units in the community would see Jerez’s small but colorful mural. On the opposite side of the same wall (facing DeKalb Avenue) is David Fichter’s 300-foot-long epic “Eastern Subcontinental Divide” mural. The contrast between the large scale, public-facing mural and the “secret” hidden gem on opposite sides of the same partition makes this lucky find even more interesting. 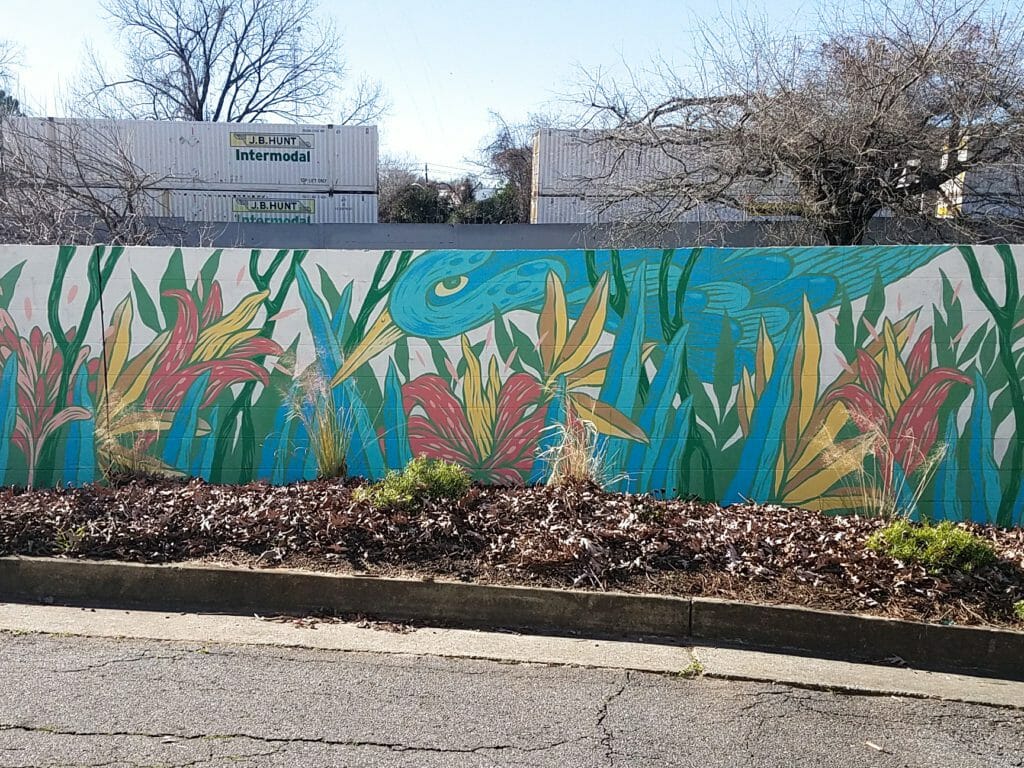 Location: On a wall next to the driveway inside the Lake Claire Co-housing Community off Connecticut Avenue. View on Map

Fabian Williams is one of Atlanta’s best loved artists.  In his role as an activist, he initiated the “Kaeperbowl,” where eight different artists painted murals of Colin Kaepernick for Atlanta’s Superbowl in 2019. Williams often portrays African American role models as larger-than-life superheroes in iridescent tones in prominent locations throughout town. However, this literally “down to earth” mural packed with generation-to-generation symbolism is tucked away behind the Jim Adams Farm & Table building for the enjoyment of those who seek it out. 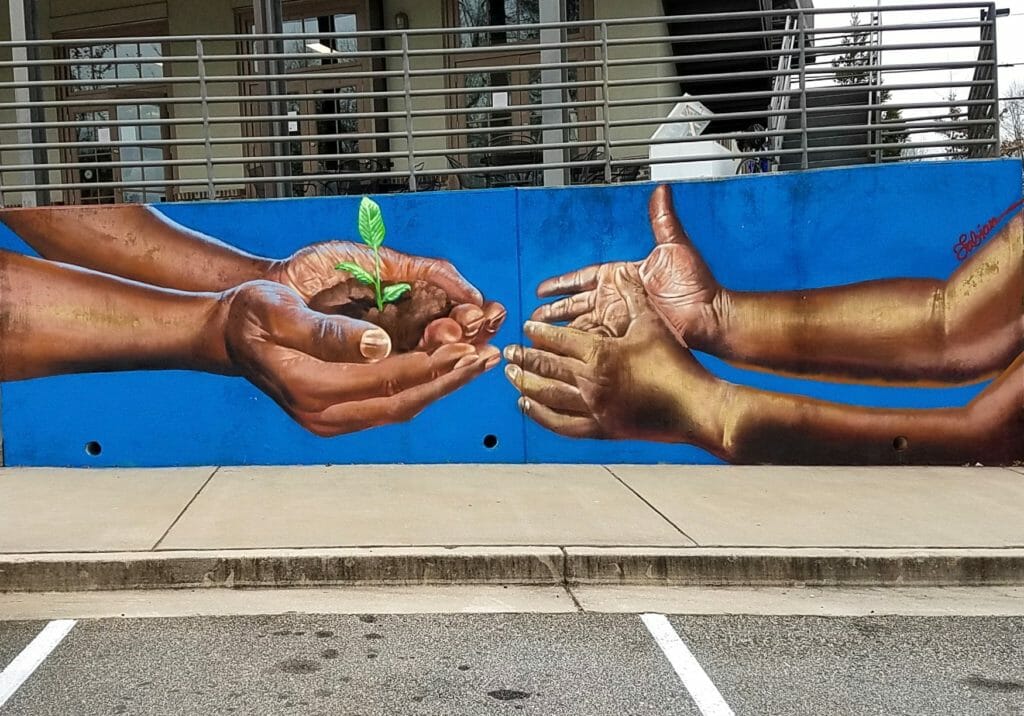 Location: On the back of Jim Adams Farm & Table, 2011 Bolton Road in Atlanta’s upper west side. View on Map