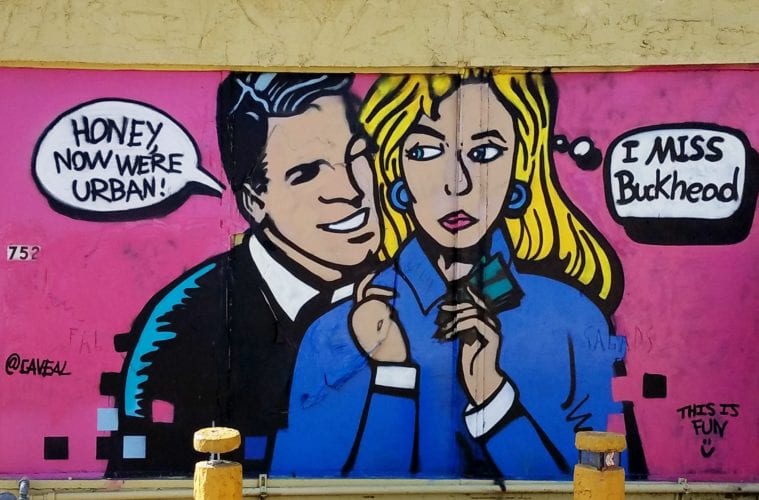 Chris Veal on the gentrification of in-town neighborhoods: This mural, once on Ponce De Leon Avenue in Poncey-Highland, is now gone. (Photo by streetartmap.org)

This week in street art: Satirist Chris Veal and his ”art should be fun” outlook

This weekly column spotlights the newest and coolest in Atlanta street art. Today we visit with the prolific Chris Veal, who often turns a satirical eye on Atlanta, using his favorite medium — spray paint — as social commentary. He’s mocked the outsized partisanship of former Georgia Lt. Gov. Casey Cagle, the Atlanta Braves move to Cobb County, gentrification, the ubiquitous nature of smartphones, the opioid epidemic, the gap between the paychecks of educators and NFL players and Atlanta’s infamous rush hour, among other topics. You’d best look fast, though. Many of Veal’s murals are painted over fairly quickly, as is the nature of street art.

Veal, 37, was born in Milledgeville and has been making art in Atlanta since he moved to the Old Fourth Ward in 1999. He spends 60 to 80 hours per week doing graffiti, portraits and murals as well as his day job in art reproduction at PPR Atlanta. He calls himself a “workholic” but only puts in the hours he does because he loves making art. His satire was supposed to be a one-off thing, Veal says, making fun of people gentrifying his neighborhood. It clicked with onlookers, though, and snowballed from there.

His ideas can come from anywhere — the constantly updating internet feed Reddit or whatever’s on his mind or bothering him. Mostly, he says, they’re about things he finds ridiculous.

He doesn’t have one, he says. Veal tries to work in a variety of styles instead of sticking to one, although people do like his pop-art work. “I find one style to be boring. I think art should be fun.” Chris Veal’s mural about our love affairs with our phones (above) was on Moreland Avenue in Little Five Points. He painted over (below) with a piece on opioids. (Photos by streetartmap.org) Chris Veal compares the flocks of Bird scooters on the Atlanta BeltLine with Alfred Hitchcock’s 1963 thriller. The mural lived, briefly, under the Freedom Parkway bridge. (Photo by streetartmap.org)

Veal has done walls in Miami and in Chattanooga and Memphis, Tennessee. He has a trip to Iceland on his docket and hopes to leave some of his art there.

ARTS ATL’s street art column is a collaboration with Art Rudick and his Atlanta Street Art Map. (Please send comments, suggestions and ideas for street art you’d like to see here to kathy@artsatl.org.)