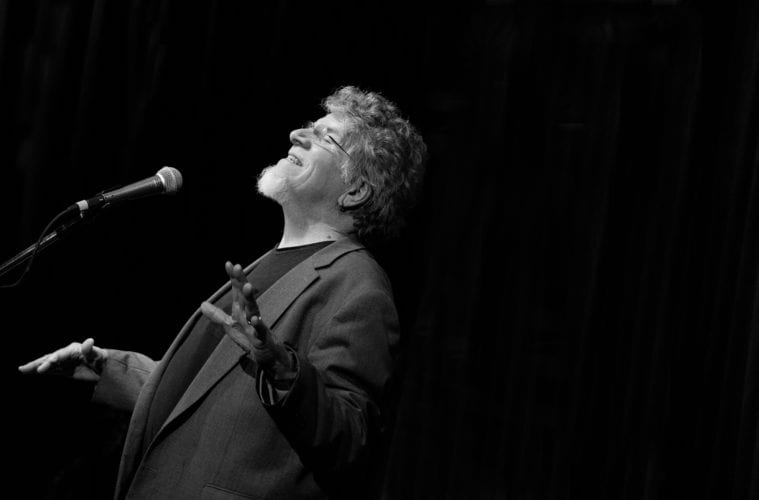 A venerable fixture in the local music and poetry scene, Kodac Harrison celebrates his 70th birthday this Saturday at Smith’s Olde Bar. The show will serve as a retrospective of Harrison’s artistic career and will introduce his latest album, In Too Deep 2, which will be for sale at the show and available on all digital platforms and on CD.

Harrison founded Java Monkey Speaks, now known as simply Java Speaks, in 2001. The weekly poetry reading and open mic is one of the longest-running reading series in the Atlanta area. Harrison passed the baton to Theresa Davis in 2016, who now leads the weekly event at The Pinewood in Decatur on Sunday evenings.

In 2013, Harrison combined a broad selection of his work in a paperback titled The Turtle and the Moon. He paints abstract art and holds a degree from Georgia Tech University and a master’s from Tulane and has served in the army.

ARTS ATL sat down with the local legend to discuss the upcoming record release, the past and present of local poetry, a near-death experience that changed everything and a lifetime commitment to art.

Kodac Harrison: In Too Deep 2 will be my 21st release, and it includes two CDs. Most of the songs on this forthcoming record were previously released in different forms that aren’t available for download online. There will be some new stuff on the CD as well. I wanted to make my music available and online because the early stuff wasn’t in digital form. I started to conceptualize this record right after I released From Tupelo to Memphis in 2017. My goal was never to get rich off CDs, rather to make enough profit to make another CD. Album art for In Too Deep 2

ARTS ATL: What’s to expect at your birthday show this Saturday at Smith’s Olde Bar?

Harrison: This show is going to be a retrospective of my career. I will start off playing solo because that’s how I began my music career. Then I’ll add different musicians to it. There will be a Java Monkey segment in which I bring up Davis and other poets to represent that time in my life. And finally, the full band will close the night. All the musicians coming in have played with me here in ATL and gone on to other places — these people that I’ve played with mean a lot to me. Also, some local musicians will be performing with me as well.

This is my last musician hoorah for two reasons: I’m turning 70, and I have a tremor that is making it physically difficult to play guitar. My music always revolved around me and my guitar. I expect I’ll still write songs and perform somewhat, but I can’t imagine doing any major performances or tours. I’ve gotten into the poetry more as a result of this.

ARTS ATL: Can you tell me about your near-death experience in 1989?

Harrison: About 30 years ago, I was involved in a serious automobile accident. According to my surgeon, I had a 1:100 chance of survival and a 1:1 million chance of full recovery. I’m the lucky one. Before then, I wanted to be a rock ‘n’ roll star. After my [accident, I went through] 6.5 hours of brain surgery, five days on life support and two weeks of being in the hospital.

ARTS ATL: Did this experience reshape your creative process?

Harrison: Going through this made me rethink my entire way of doing things. I sold off all my electric guitars and moved to Decatur to pursue the acoustic scene. There was a singer/songwriter scene that I had really been building there that I became involved in. I started taking responsibility in the release of my music and not getting so caught up in the industry as a result of my accident.

I also started painting houses to help myself financially, and I started experimenting with the backsides of my drop clothes. That’s how my abstract painting style developed. That’s tied directly into making art my priority — I didn’t have to report to a 9-to-5 job, and I could go into the music studio one day if I needed to or whatever. At the same time, I have a degree from Georgia Tech, a master’s degree from Tulane University, and I was committed in the army. You could say I was set up for the corporate world, but that wasn’t what I wanted to do.

Harrison: I am a songwriter who would typically write words first, which is atypical — most songwriters write the music then write the words. So for years I didn’t consider myself a poet because everything I wrote I would put music to. Songs are different than poems in many ways. Typically, you have choruses in songs, which are repetitious. You don’t have a lot of repetition in contemporary poetry, and a lot of the time modern poets don’t rhyme as much. It took a while to write a poem that I wouldn’t put music to. ARTS ATL: Can you tell me about founding Java Speaks poetry nights?

Harrison: I founded Java Speaks in 2001, and it will be 18 years old this June. I had run monthly poetry nights before that, and the longest it lasted was about two years. The fact this lasted so long is amazing. I built a diverse situation there — diverse in every sense of the word, including age, gender, race, style of poetry, sexual preference, etc. I have featured poets from 19 different countries. We have had anyone from Pulitzer Prize-winning poets to first-timers.

ARTS ATL: How have you seen this program — and poetry in general — change after nearly 20 years?

Harrison: It has grown tremendously. There was very little grass-roots poetry going on in the ‘80s and early ‘90s. I saw a woman named Patricia Smith come through town, and I loved her work. After seeing her, I wanted to put on a reading where we could pay poets. I started my first poetry reading in Inman Park in 1997, and it was fairly successful — I booked five features and charged a cover. Then I did it for a while at Margaret Mitchell House and in East Atlanta. None of these lasted more than two years until Java Speaks came along. I realized people wanted to do their own thing, so I brought in one poet instead of five and left the mic open to anyone that wanted to speak and did not charge a cover. Open mic was a huge part of having a successful reading, and it really brought a lot of business and attention to Java Monkey.