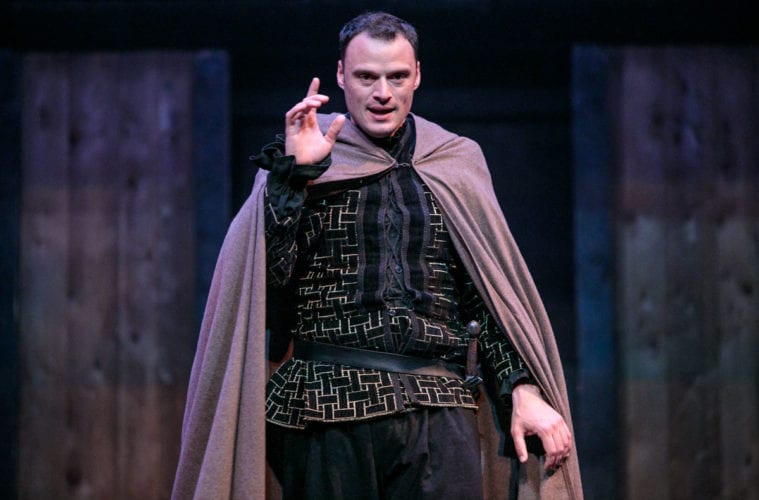 Lee Osorio tackles the title role in Hamlet at the Shakespeare Tavern Playhouse.

The Atlanta Shakespeare Company’s latest production of Hamlet is a marathon that tests the cast’s stamina in many ways. Hamlet is regarded as Shakespeare’s greatest tragedy and asks: What does it take for someone to break? Is revenge always necessary? Will it make you feel any better? Running through May 5 at the Shakespeare Tavern Playhouse, this three-hour behemoth is an unforgettable night of theater.

Hamlet takes place when the Prince of Denmark (Lee Osorio) returns from school to mourn his the death of his father (Maurice Ralston). His mother, the queen (Olivia Dawson), marries Claudius, his father’s brother (Jeffrey Watkins). At midnight, Hamlet’s father appears to him in a ghostly body and demands revenge. Thus begins Hamlet’s mental unwinding.

We begin to see the crack in his mask when he goes to meet Ophelia (Shelli Delgado), overwhelming her in a verbal assault full of contradictions that ultimately leads to her emotional spiral.

The strength of this production is its casting, a diverse bunch that need not advertise its inclusivity. These  actors show that classic tragedies are human stories, regardless of gender, race or sexual identity. 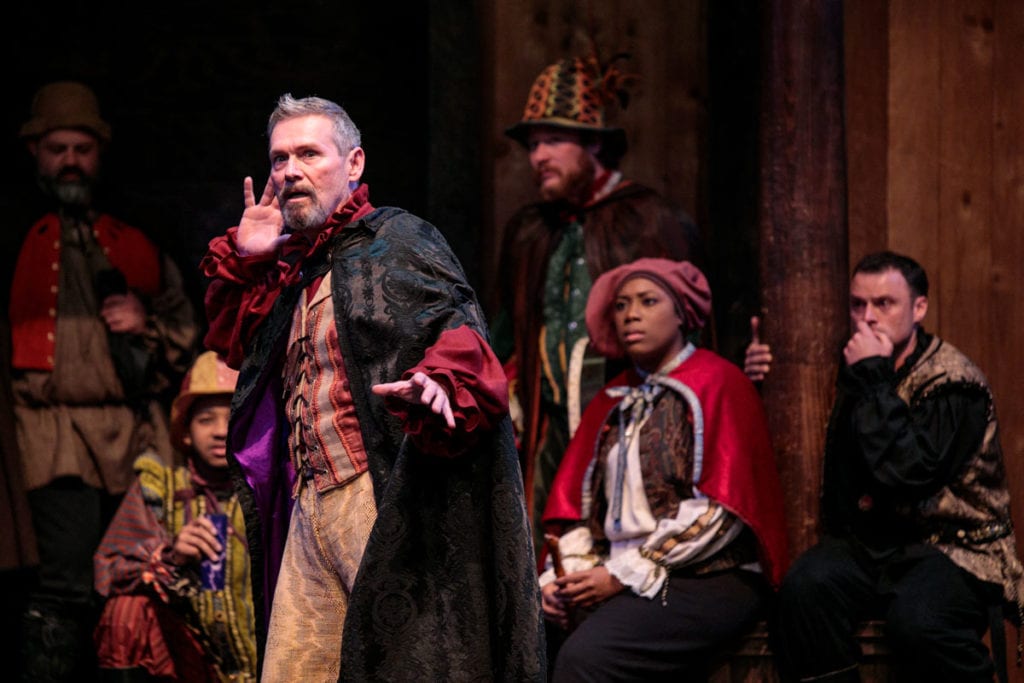 Maurice Ralston as Hamlet’s ghostly father (foreground) and Lee Osorio as Hamlet (far right), with members of the company. (All photos by Daniel Parvis)

Hamlet’s scene-to-scene pacing can make it easy to get lost in the storytelling and gauge the time between some events, but this Jaclyn Hofmann-directed staging finds its footing early. It’s as if Hofmann said, “Lee, run wild.” And he does.

Osorio’s Hamlet doesn’t spend all three acts brooding. He gives Hamlet moments to breathe, laugh and connect with his scene partners. He manages to capture Hamlet’s attempts at controlling everything around him and ultimately his mental deterioration. It’s the clearest and best depiction of Hamlet’s mental state I’ve ever seen. His performance is EVERYTHING.

This Hamlet finds a welcome classic/contemporary balance. You see the big arms and mighty voices most often associated with Shakespeare, but the soliloquies are natural and delivered the way Hamlet would talk to himself and an audience. 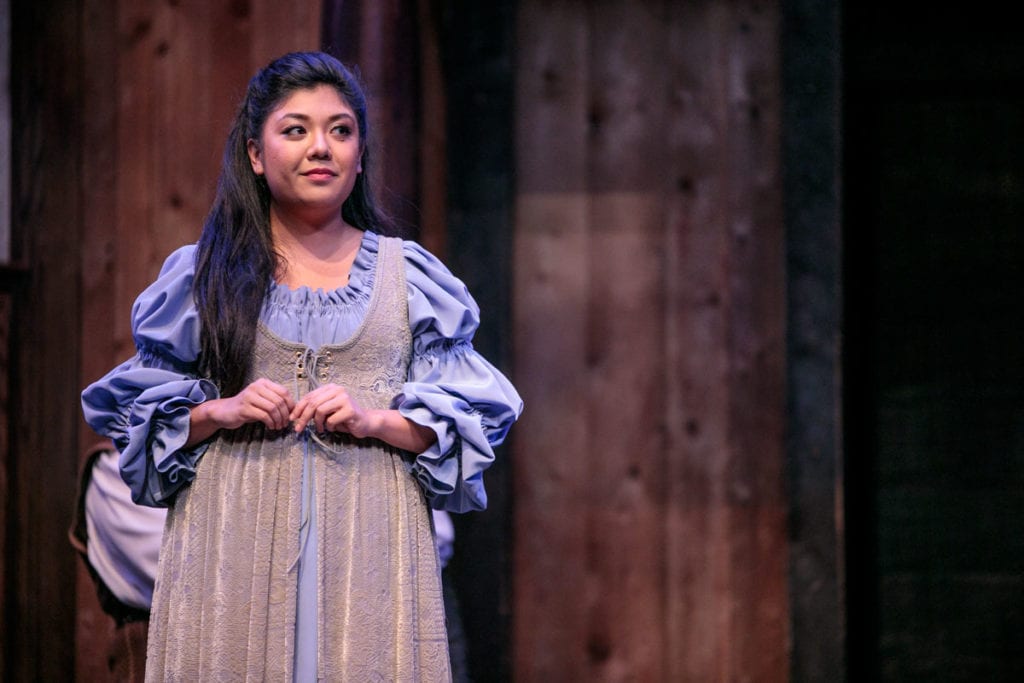 Shelli Delgado, like Osorio’s Hamlet, goes for it. She doesn’t rush us into Ophelia’s breakdown, which is rare. Most actors come out fully amid their declination to show how far she’s gone, but they don’t realize they’re robbing the audience of that transition. Delgado finds a way to present raw emotion while maintaining the innocent, demure presence the character is known to have.

Cory Phelps, who plays several ensemble roles including one of the gravediggers, displays flawless comedic instincts and timing. He’s tapped into some 21st-century comedy while remaining true to the show’s classic sensibilities.

Every show has its snags, though, and here it comes in playing the expected. Traditionally, when you think of bad Shakespeare, it’s pointless screaming, shaking and fainting. Bridget McCarthy’s work in Act III, for example, is almost jarring. In Act I, she steps onstage as Laertes and immediately charms us before being dispatched. When Laertes returns in the third act, she arrives in a quieter stretch of the show and seems offbeat. Everyone else is in a heady, thought-forward lane, and she emerges from a pure, instinctual place. It’s true to the character, but her choices ring a little too loudly in this otherwise well-orchestrated symphony.

This production is, nevertheless, well-crafted and performed, and it’s truly an all-ages event. Audiences include school groups, older people and young adults on dates — every group is there and anticipating a good show. It’s also great to see “traditional” costuming in a Shakespeare piece. Most modern productions are staged as military dramas. It’s refreshing to see guns traded back in for swords and daggers.