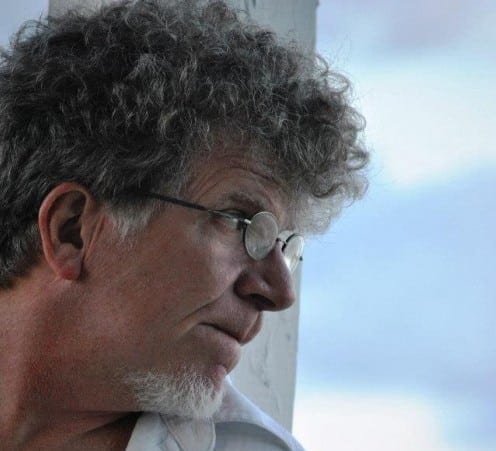 Q&A: “The Turtle and the Moon” collects songs, poems and paintings by Atlanta’s Kodac Harrison 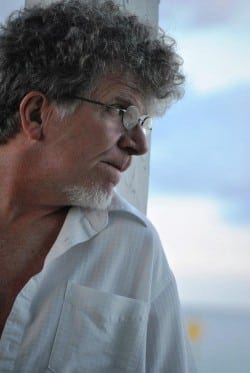 A legendary fixture on the Atlanta music and spoken-word scenes, Kodac Harrison has been a performer for decades. He has traveled extensively, not only around the country but abroad, performing his songs and poetry. Now, for the first time, the public can read a broad selection of his work in print, collected in a handsome paperback titled The Turtle and the Moon and published by Poetry Atlanta Press.

The book is an anthology of Harrison’s song lyrics and poems, which he has recorded and published individually beginning in the mid-1970s. The turtle of the title represents the author. Each of the book’s six chapters bears an epigraph describing a phase in the turtle’s life and a corresponding phase of the moon. One chapter chronicles his travels, another his love life; one chapter portrays his depression, another his maturation.

Many of the book’s pieces use the conventions of songwriting, such as close rhyming and assonance, as well as a verse-and-chorus structure, with considerable variation. Harrison demonstrates his skill at rhyming in such pieces as “Angel of Mercy”: “He had a smoke stack spewing from his lips / A hole in his hat / and nothing at his fingertips.”

He also experiments with free verse, depending less on the sonic patterning of rhyme and more on the pleasures of wordplay and evocative associations. In “A Risky Rhyme,” a wonderfully inventive poem about being attracted to a tall, intimidating woman, Harrison writes, “Oh to be like Jack / To climb that slender stalk / To stand face to face / Eye to eye / With the Amazon / Still I would never chance / Being accused of stalking.” He rhymes only once in this poem, cleverly, in the final, foreshortened line: “I might not survive the fall / Still I might be tempted to risk a rhyme / And call.”

The collection features Harrison’s visual art as well. The six paintings, which introduce each chapter, are abstract compositions. Bold and colorful and energetic, they call to mind the action painting of Jackson Pollock. The cover image, a depiction of a boxy turtle gazing up at a full moon, is by Gary Goodman.

The Turtle and the Moon chronicles a journey through the events in a man’s life — the deaths of loved ones, travels, love affairs, marriage — but it also depicts his emotional growth, as well as the evolution of his observations about the world. As a consequence, the author tries to capture a wide swath of human experience: suffering and poverty, addiction, oppression and bigotry.

Despite the trials endured by the characters in his work, Harrison invariably returns to joy and hope, as in one of the book’s final poems, “Ready to Fly”: “It’s almost Independence Day / I think I finally found the groove / I think I’m ready to fly.”

ArtsATL recently sat down for a conversation with Harrison, who will read from The Turtle and the Moon at the Decatur library beginning at 7:15 p.m. Monday, September 23, along with fellow poets Michael Diebert and Ed Pavlic, at an event sponsored by Poetry Atlanta in partnership with the Georgia Center for the Book. 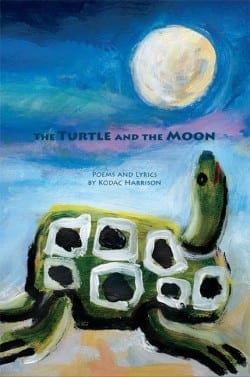 ArtsATL: If the turtle in the title of your book is meant to stand in for the writer, what does the moon symbolize?

Kodac Harrison: I think the moon is something man has gazed upon when making wishes or dreaming. The moon brings light to the night. It is the unreachable, even though in modern times man has reached the moon. For me it symbolizes all those things and more. As a romantic, I believe magic happens under the light of the moon.

Harrison: I started as a songwriter. I read lyrics, not poetry. Although I’ve tried to make my lyrics as poetic as possible, lyrics are typically different than poetry. That is, lyrics tend to have more repetition, more rhyme and more of a verse-chorus structure. In the early days critics starting calling me a poet, and I was afraid of that label, because I considered myself a songwriter and nothing more. Those critics caused me to broaden my view of my own writing.

Eventually, when I chose a song to recite without music, I chose one with less repetition and less rhyme. Initially I set almost everything I wrote to music, but as I expanded my concept, I started writing pieces with no intention of putting the words to music.

Different than most songwriter’s approach to writing songs, I generally start with words first. I guess in that respect the creative process has been the same. From the beginning I have tried to make my songs simple and profound at the same time. I try to accomplish the same with my poetry.

Harrison: For years I have supported my art with house painting, which gave me the freedom to make my art my priority. That is, I could determine my own schedule. I could tour when I wanted to, I could take off to do an interview, a photo shoot, a recording session or whatever, because I worked for myself. In the process I would use one side of a drop cloth for artistic fun and the other for work. I would use washes [watered-down paint] to tint sections of a cloth. If I had an interesting color, I would apply it in different ways to the fun side.

Over the years some of these became very interesting. Still, I was doing it for fun. On my 60th birthday, Sylvia Cross offered to give me a show at the Sycamore Place Gallery in Decatur as a birthday present. I took her up on it and stretched some of my canvases, which really made them jump.

Since then I have displayed my paintings in several locations. I have also painted pre-stretched canvases using the same technique, but shortening the time frame. You might say I did the same thing I did in moving from lyrics to poetry. That is I broadened my concept. I opened my mind.

ArtsATL: My favorite piece in the book, being a tall woman myself, is “A Risky Rhyme.” What inspired the poem? Is it addressed to a particular real-life tall woman or an ideal imaginary one?

Harrison: I have always been attracted to taller women. This poem was inspired when I was playing in a club and a tall woman walked in. She was tall, had dark, thick, wavy hair and was wearing red cowboy boots. She was real and ideal at the same time. I was trying to write a poem and not a lyric. At the time, I saw one major difference between writing lyrics and poetry: the former rhymed and the latter didn’t. Now I’m not sure I want to put limits on either. At the time, I took a chance on a rhyme.

ArtsATL: “A Risky Rhyme” seems very much a poem as opposed to a song lyric. Could you talk about how you approach the structure of a song or a poem? Do you know before you begin what form you want the piece to take, or do you let the subject and the emotional tenor dictate the form?

Harrison: I never intended to turn “A Risky Rhyme” into a song. In fact, it was written in that time of transition, when I was trying to write sans music. Sometimes you never know what is going to happen with a piece. For instance, after my first trip to Amsterdam, I wrote three poems about my visit. Later I was trying to create a slam piece and put the three poems together, so that it would come closer to three minutes when performed. I later took the slam piece and added a chorus and recorded it as a song with my band. You take it where it wants to go.

ArtsATL: How does it feel to see your work, much of it song lyrics, published in book form for the first time?

Harrison: With my connection to the Atlanta literary scene, I feel I’ve needed to have a book out for some time. At the same time, I love recording music and spoken word. Still, I didn’t know what kind of book I wanted to publish. I have been trying to write a book of fiction for some time. I have also been writing a book of the stories behind some of my songs and poems. There are some interesting stories behind some of these pieces.

I finally decided to publish a small book of poems. With the encouragement of Poetry Atlanta, Collin Kelley, Mary Alice Cantrell and my wife, Patricia, along with the help of English artist Gary Goodman and all the previously mentioned people, the smaller book of poems expanded to include lyrics and paintings. The last thing we decided to add were the paintings.

ArtsATL: Now that the turtle has grown older and philosophical, and now that the moon is full, what phases are next for the turtle and the moon?

Harrison: I was involved in a near-death experience back in 1989. There are several pieces in the book that were inspired by that event. Since there was severe head trauma involved, I have always feared Alzheimer’s. I asked my surgeon if there was anything I could do to prevent dementia. He said, “Keep doing what you are doing.” I asked, “And what is that?” He said, “Keep creating.” So I’m going to try to keep creating. I want to try to continue to follow my art and allow it to expand. I want to keep an open mind. I want to continue to learn and to appreciate the fact that I am a lucky man.