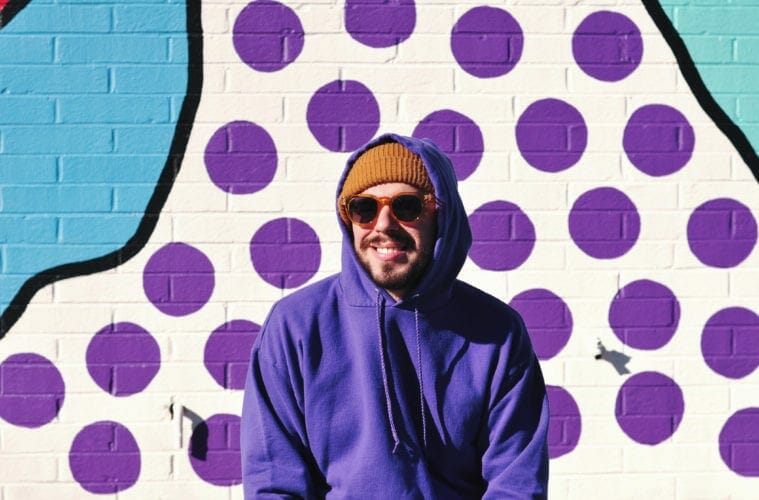 Apparently, Yoyo Ferro likes purple. The Brazilian-born Atlanta muralist takes a breather while at work on his wall at Toco Framing, 3326 North Druid Hills Road in Decatur. Polka dots, and bright colors, are among his trademarks. (Photo by Kristin Ferro)

None of the many murals raising metro Atlanta’s art IQ these days are likely more recognizable than those of Yoyo Ferro (real name: Benito Ferro). The bright color palette, the black outlines, the stripes and polka dots are attention-grabbing. His ever-present figures, whether holding hands or floating in space, have become a signature.

The 33-year-old’s work has been compared to famed pop artist Keith Haring (1958–1990) and the bold imagery of the Craig and Karl team (New Yorker Craig Redman and Londoner Karl Maier). Some people call his work pop art, but, Ferro says, “I try not to get caught up with labels or a specific style.”

What is important to him is the story within the work. “The theme of my work is to tell a story of characters going through life’s struggles and their attempt to reach their goals.” The abstract shapes are the landscape of the characters’ lives; the colors represent phases or moods. The origami he uses symbolizes his characters’ goals. Floating figures, or figures holding hands, are often in found in Yoyo Ferro’s street art, as is origami. This piece is at the Modera Buckhead Apartments on Peachtree Road. (Photo by streetartmap.org)

Ferro, who’s Brazilian, moved to Atlanta in 2010 and used Instagram to connect with the artistic community. In Brazil, he played bass in a punk-rock band called Razura. When it broke up, he and his brother continued on under the name Ferro Yoyo, which he’s kept. “I like having this second name because it gives me the freedom to play and try different things,” he says.

He began making art — specifically origami — in 2012, finding inspiration everywhere, from Atlanta’s downtown skyline to public work by the street artist Hense. “I remember first seeing Hense’s mural wrapped around the building of Fay Gold Gallery, and I loved it. I knew I wanted to do that.” This wall, done in concert with the Forward Warrior mural project, lives at 663 Wylie Street SE in Cabbagetown. (Photo by Kristin Ferro)

Ferro, who’s self-taught, has painted walls from College Park to Broad Street downtown to Monroe Drive and Renaissance Parkway. He’s worked with the public art nonprofit Elevate Atlanta, the Cabbagetown nonprofit mural project Forward Warrior and the event series Outerspace Project. He’s painted at Cross Keys High School and at the New School Atlanta on Memorial Drive, done a series of low walls at the Modera Buckhead Apartments and Stacks Squares in Cabbagetown and has been commissioned by such companies as Stella Artois, Adidas and REI, among others. Ferro’s busy prepping for his first solo exhibition indoors this December. The show, titled Color-Full, opens December 7 at the Plaza at Ponce City Market along the Atlanta BeltLine. The canvases he’ll share pair with murals he’s done. “Many of the murals were inspired by these paintings,” he says, “and many of my canvas paintings have been inspired by the murals.” See more of Ferro’s murals and other work HERE, and follow him on Instagram HERE.