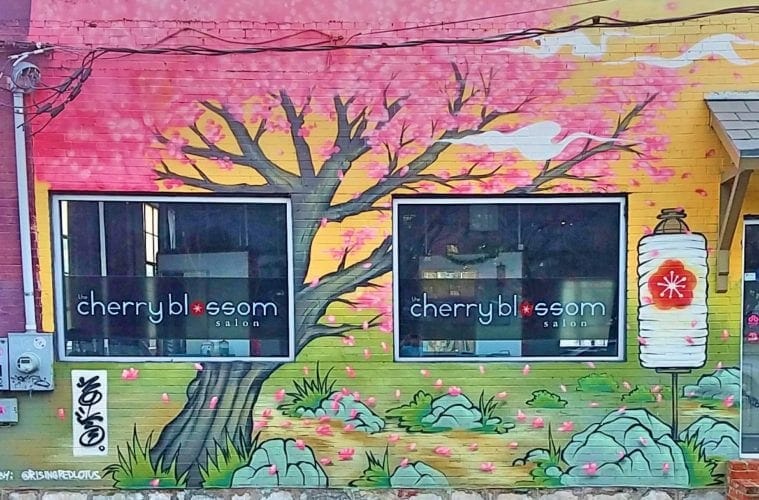 This week in street art: Step off the trail and see what you’ll discover

The Atlanta BeltLine is the largest outdoor art park in the Southeast, but if you’re willing to stray from the path, you’ll see some of the best murals in the city. That endorsement comes from Art Rudick, auteur of the Atlanta Street Art Map.

Last week we looked at eight of the 60-plus murals on the 3.1-mile Eastside Trail. Today we look at eight murals between Virginia Avenue and Ralph McGill Boulevard, just a few minutes off the trail. Next week we’ll look at off-the-path murals between Irwin Street and Memorial Drive. Take a visual tour at Atlanta Street Art Map.

The BeltLine, the largest urban redevelopment project in Atlanta history and one of the largest in the country, will eventually convert 22 miles of abandoned railroad corridor into trails that circle the city and connect 45 neighborhoods. Onto the artists (in alphabetical order) and their work.

The street artist known as ARCY (real name: Ryan Christenson) has been doing large-scale murals for more than a decade from his home base in Connecticut. In 2015, he began a North American tour, spray painting 8- by 12-foot murals in front of onlookers. Since then, he’s created hundreds of live murals and permanent large-scale works in such places as Bristol, England; Bel Air, Maryland; Loures, Portugal; Vancouver, British Columbia; Raleigh, North Carolina; and, of course, Atlanta. Whether he’s painting vibrant animals (birds, cows, frogs, pigs) or people (the Dalai Lama, Elvis, Ella Fitzgerald, Abraham Lincoln), he says he simply wants to leave his mark wherever he goes and give back to humanity through public art. 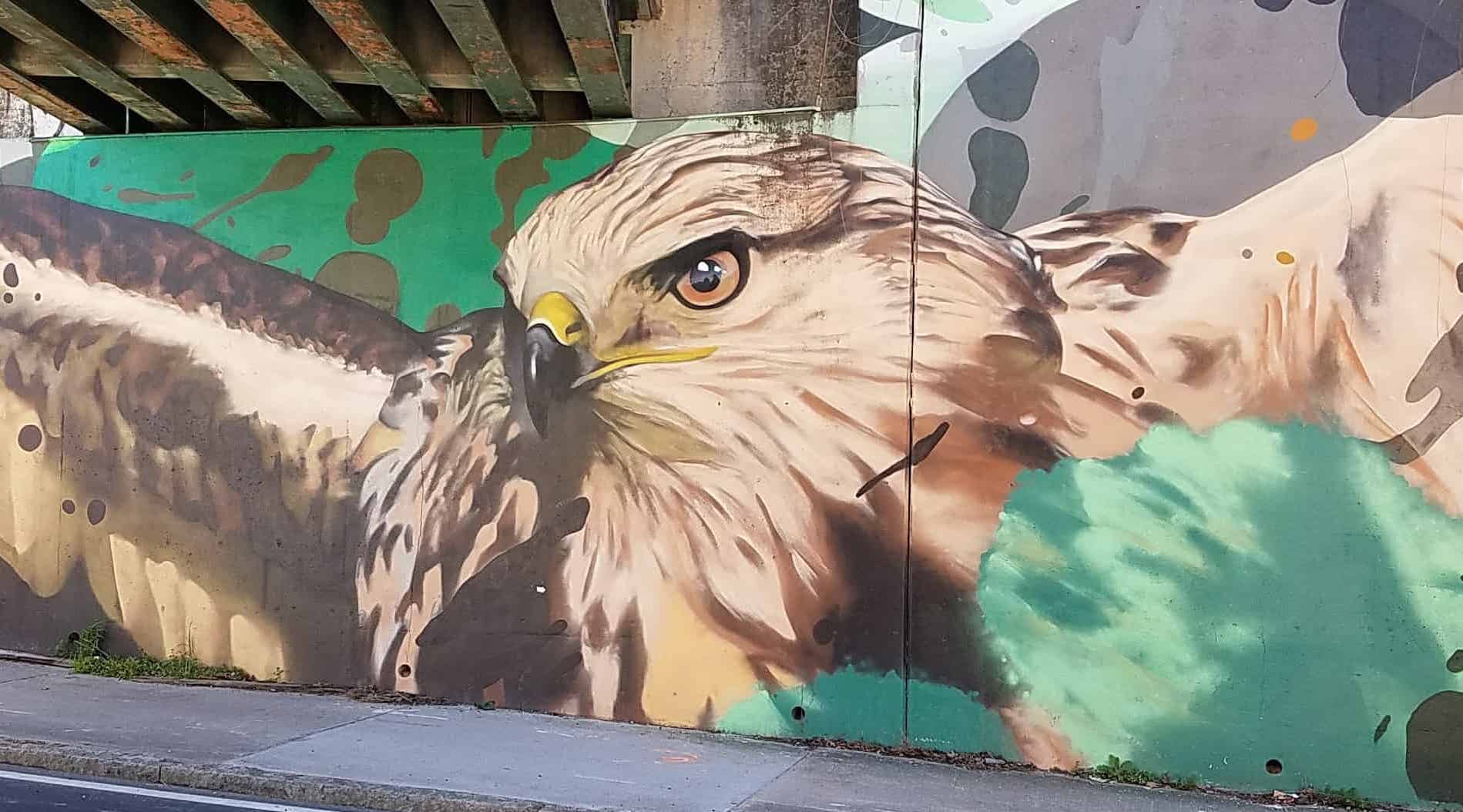 The ARCY mural at 695 North Ave. NE (All images courtesy of streetartmap.org)

The self-taught artist (real name: Dax Rudnak) has been an Atlantan since 1985. His art was inspired by graffiti he saw on MARTA trains as a boy, and he was, at first, a graffiti artist known for his iconic bubble-lettering style. “My style developed from years of painting my name over and over many thousands of times in dark, seedy places without permission,” he says. Dr. Dax will paint on anything — canvas, walls, cars and trains, and his work includes subtle patterns, whimsical animals and audacious graffiti tags. He wants viewers to leave with a sense of inspiration. Once asked what he’d paint if he could paint anything, he said, “I’d paint the whole outside of the High Museum. I’d paint subliminal messages of love in one continuous, hypnotizing abstract portal pattern.” 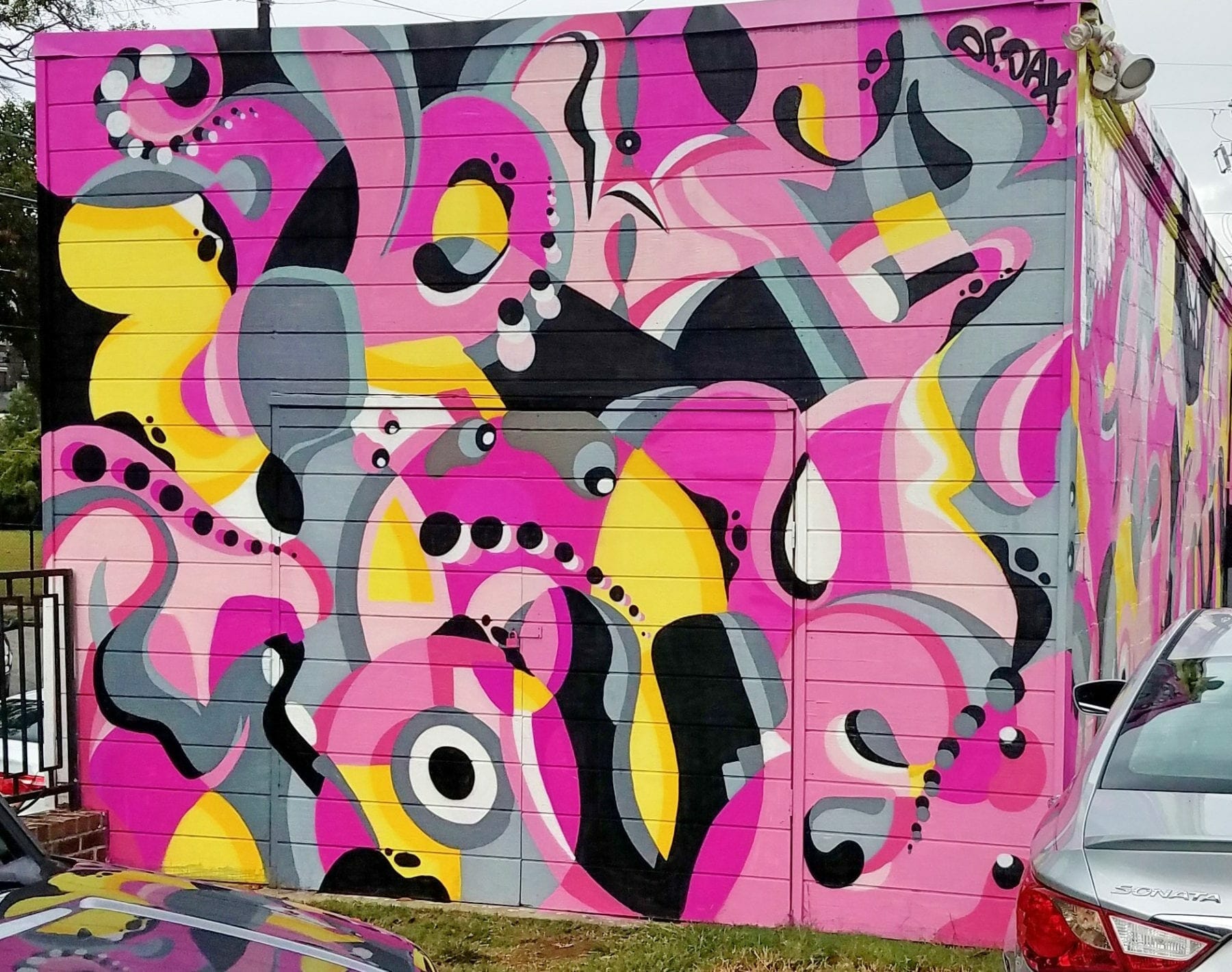 Peter Ferrari, whose work has appeared in this column before, is a freelance painter and muralist living and working here in his hometown. He also goes by the name fastredcar. His work looks like a mash-up of tangled plumbing pipes and vines growing in a time-lapse video with an occasional hand image for good measure. Ferrari is cofounder and curator at Facet Gallery in the Old Fourth Ward and founder of Forward Warrior, an annual public event that uses multiple artists to create a series of murals. 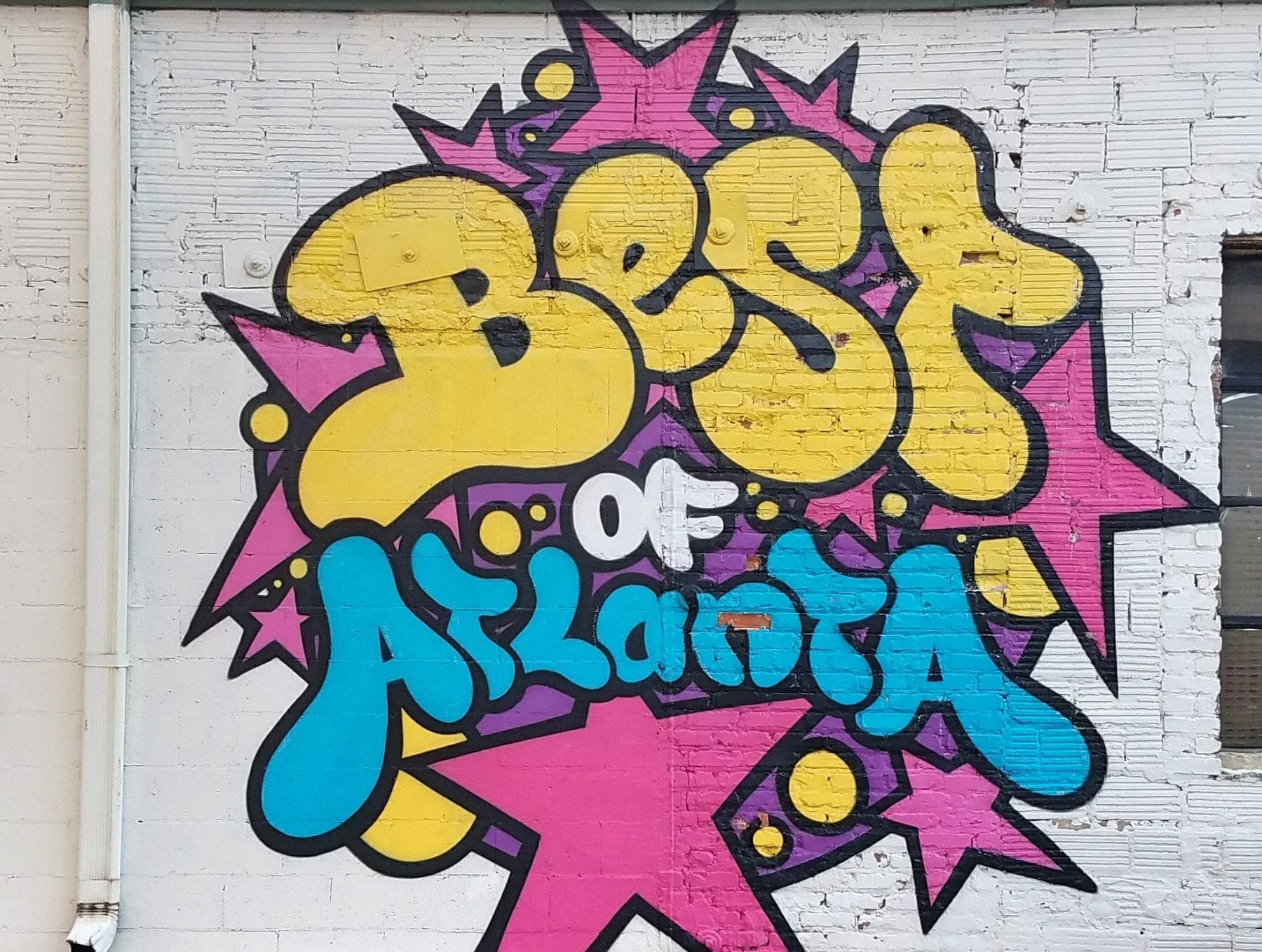 Fintan Magee is a street artist who’s done murals around the world, including in his homeland of Australia. He gained a reputation as a graffiti writer before earning a fine arts degree and settling in Sydney. His murals are like large watercolors that feature men, women and children floating in space or tethered to the earth. They have a soft, spiritual quality and often deal with nature and environmental issues. 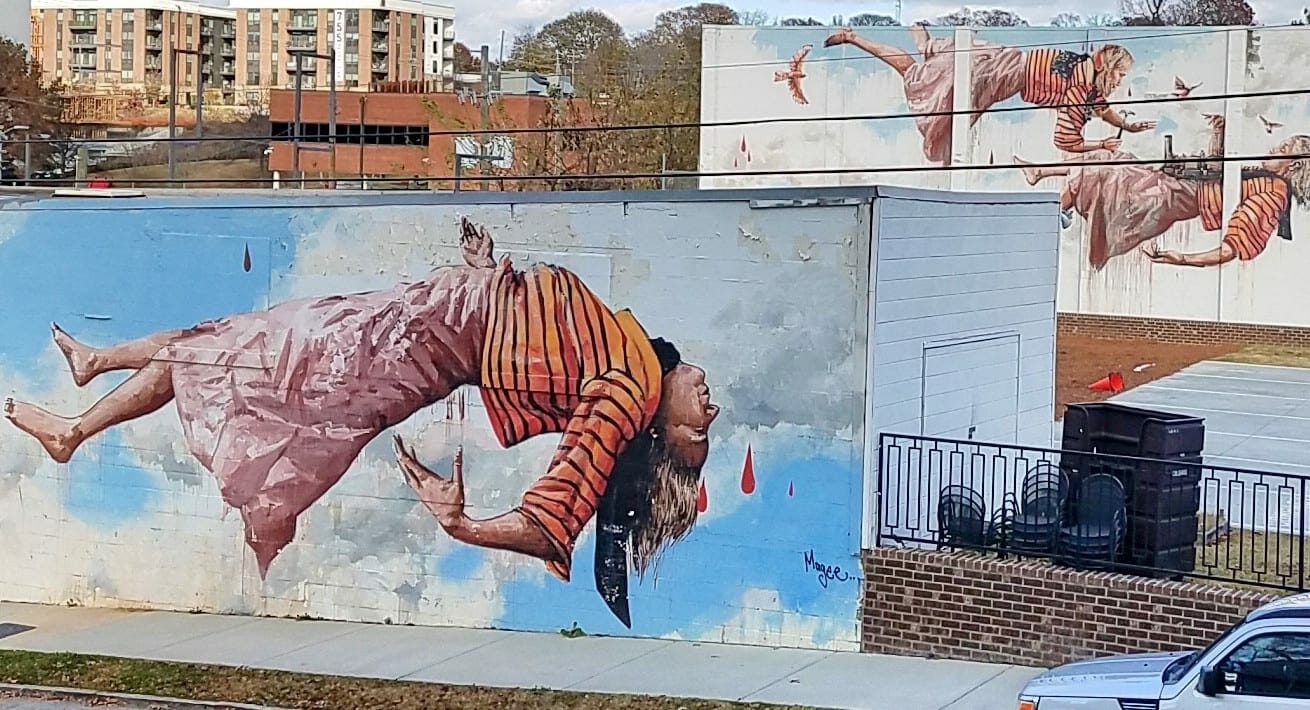 Greg Mike was a Connecticut kid whose 1980s’ trips to New York City exposed him to “the creative potential of reinventing public spaces through art and design.” His murals mix the bombast of classic NYC street art with the eagle-eyed precision of mass-market illustration and animation, according to his website. Other inspirations include skate culture and design. It’s all led to murals that crackle with color, a surrealist pop-art perspective and gleefully twisted characters. Mike, now an Atlanta resident, is the founder and creative director of ABV Agency / Gallery, a studio that specializes in branding, apparel design and visual production. In 2015, he founded OuterSpace Project, an Atlanta event series that merges public art, live music, design, action sports and culture. 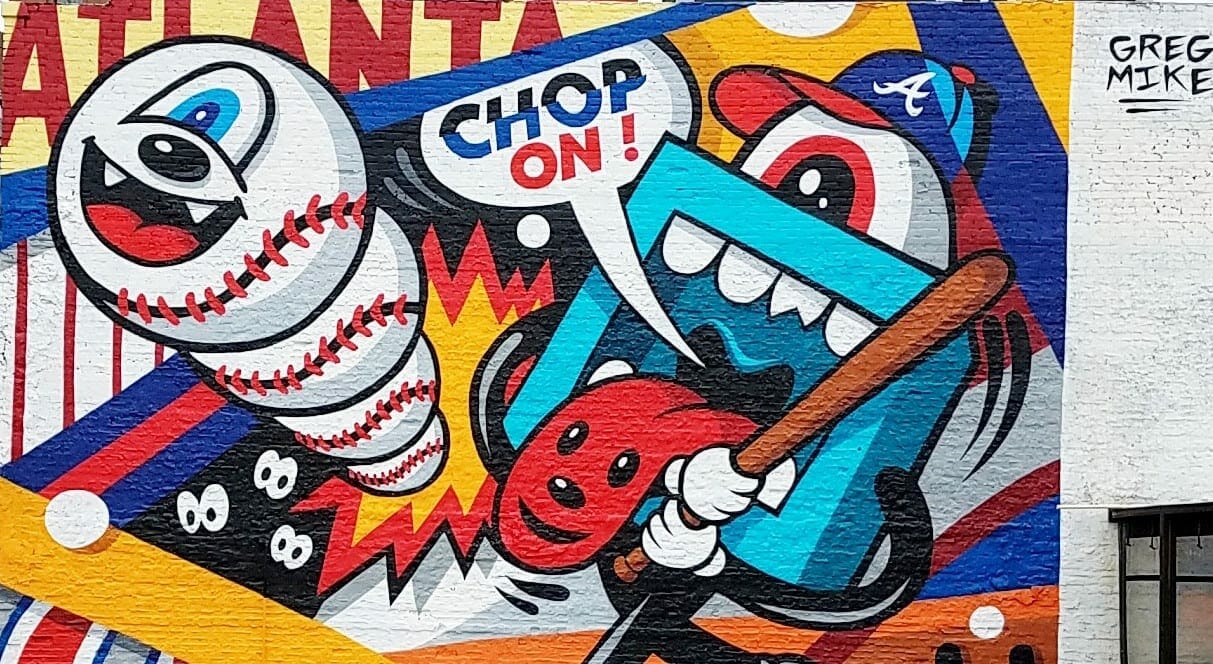 The Greg Mike mural at 716 Ponce De Leon Pl. NE is one of several others on or near the Eastside Trail.

Amir Alighanbari, aka Mr. Totem, has been painting walls with murals and graffiti in Atlanta and around the world for more than 30 years. He’s known for his pioneering 3-D style and versatility. His art is inspired by his life experiences and the characters he’s met along the way, exploring (follow along here) “the relationship between robotic armored letters he calls the Mechanical Battle Serif.” He says he’s long been fascinated by the engineering interactions of letters and started by exploring his own name. That effort evolved into a study of the dynamics between his style and the environment, and mind and machine. 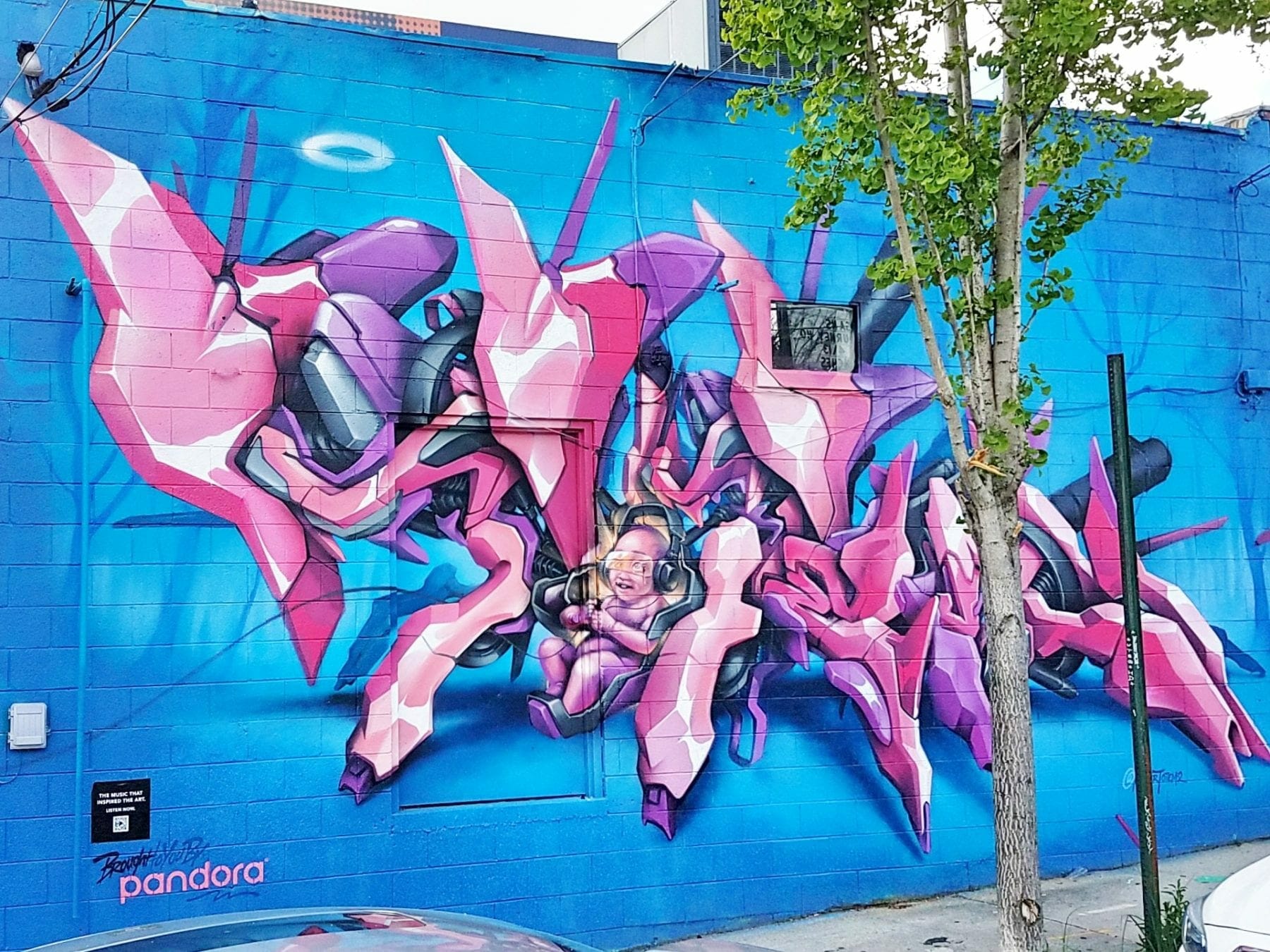 Rising Red Lotus has two murals in this off-the-path stretch of roadway — both with an Asian theme. Sadler’s mother, an art teacher, immersed him in art almost from birth, and he was first noticed as a graffiti artist using the name “Lean One.” He later earned a fine arts degree in painting and illustration from SCAD Atlanta. His interests in martial arts and kung fu movies led him to a love of Asian culture. Asian themes are a big part of his artwork, which has found its way into the permanent collection of the High Museum of Art. (Read his conversation with ARTS ATL contributor TK Smith.) 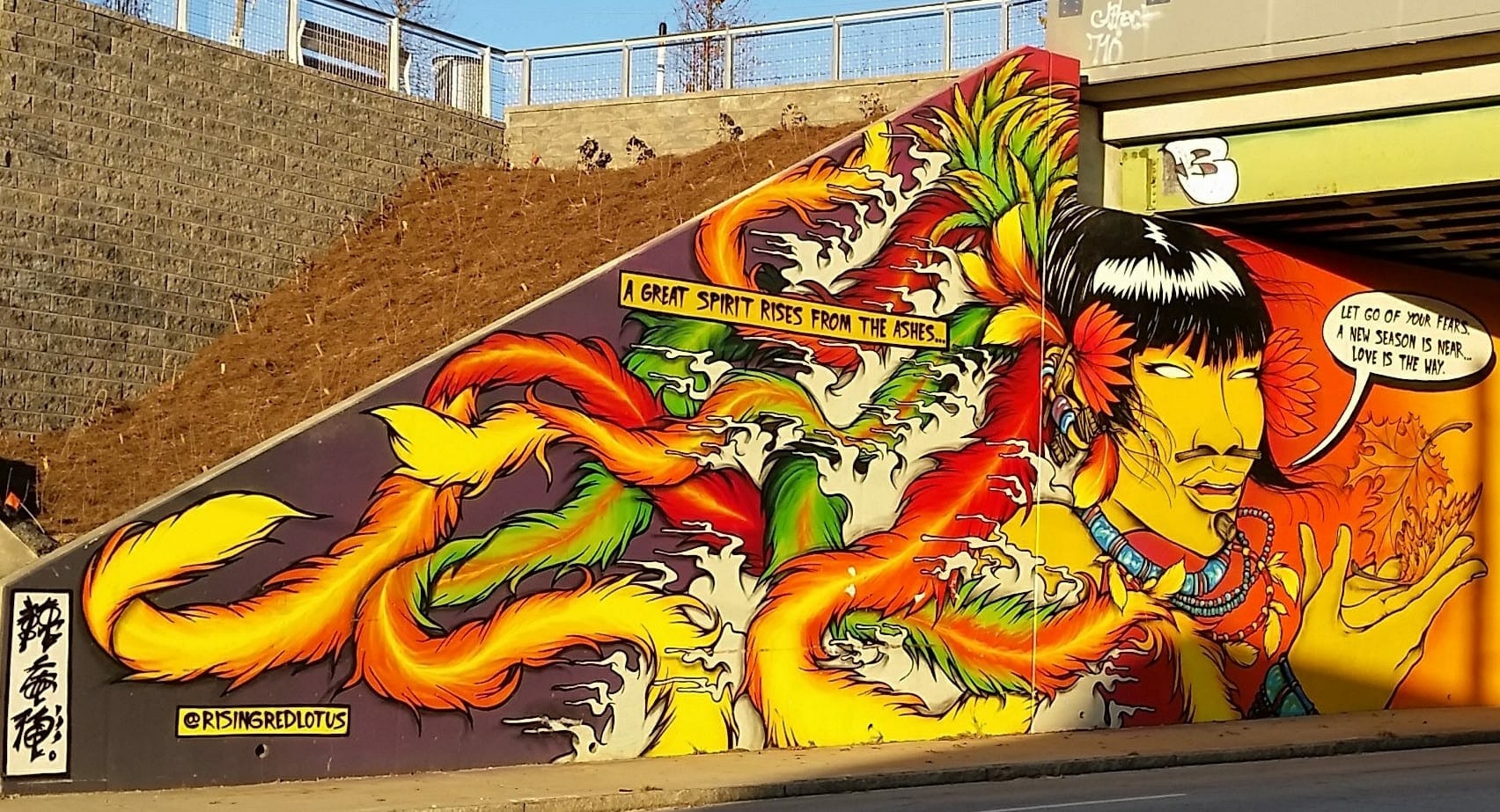