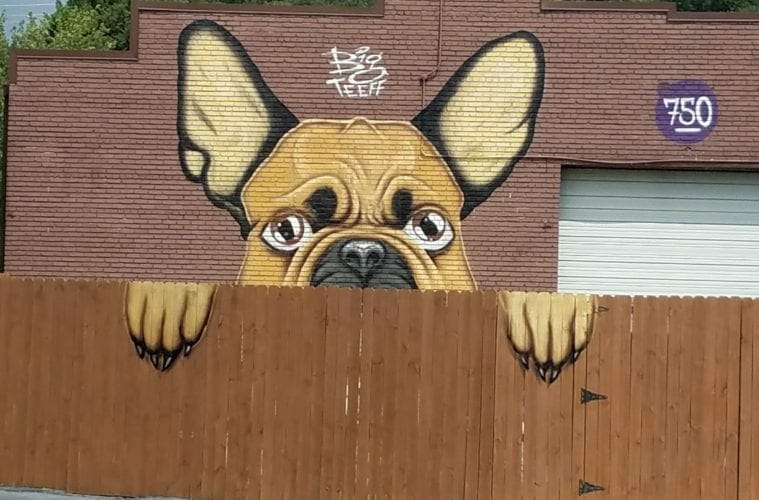 The Atlanta BeltLine, the largest outdoor art park in the Southeast, offers a tempting canvas for muralists. That is, perhaps, most true along the Eastside Trail, the 3.1-mile stretch that runs from the tip of Piedmont Park to the Reynoldstown neighborhood. Take a visual tour at Atlanta Street Art Map.

Today we sample a few of the 60-plus murals found there. In upcoming columns, we’ll look at murals found a few steps from the trail between Virginia Avenue and Ralph McGill Boulevard and between Irwin Street and Memorial Drive.

The BeltLine, if you’re not in the know, is the largest urban redevelopment project in Atlanta history and one of the largest in the country. When done, it will have converted 22 miles of abandoned railroad corridor into a network of trails that circle the city and connect 45 neighborhoods. Onto the artists.

Big Teeff (real name: Matt Ketchum) describes himself as an artist-creator-muralist-wizard. He’s been making art for as long as he can remember, he says, and enjoys making characters, creatures and weird-looking things that are in his brain. Art for him is as much therapy as passion. And success doesn’t mean making money: “I feel the essential characteristic to being successful as an artist is not being afraid to fail and to keep pushing your art and experiment.” Dope’s mural is under the bridge along John Lewis Freedom Pkwy NE. (All images courtesy of streetartmap.org)

Dope, aka the Dope Artist (real name: Ed Jacoby), is an independent artist, avid skateboarder and extreme sport enthusiast. He credits his creative career path to his love of Sunday-morning cartoons, drawing, movies and art. The animator, illustrator and painter toggles between digital and physical work and moving and still imagery. He likes to push the boundaries of creativity.​ Forward Warrior is an annual public mural event founded in 2011 and curated by artist Peter Ferrari in partnership with the Old Fourth Ward’s Facet Gallery. Multiple artists work on each year’s series of murals. The name comes from Ferrari and a former roommate who used the words “Forward Warrior” as encouragement in tough times.

HENSE (real name: Alex Brewer), the son of an architect and an interior designer, began doing unauthorized street art in the 1990s as a 13-year-old. The onetime graffiti artist is now known for his large-scale, site-specific commissions, including one at Atlanta’s Westside Cultural Arts Center and another at the ISIL Institute in Lima, Peru. That one, his largest, measures 170 feet wide and 137 feet tall. His commercial clients include Apple, Facebook, Hilton and the High Museum of Art. HENSE’s mural can be seen under the bridge at 600 Virginia Ave. NE.

Olive47 keeps her real name to herself. The Chattanooga-born street artist, muralist and printmaker recently moved to Los Angeles after nine years in London and Atlanta. In Atlanta, she was a featured muralist in Living Walls’ 2012 conference and took part in the 2014, 2015 and 2016 editions of Art on the BeltLine. Inspirations include nature, gardening, snorkeling, travel, underground hip-hop and experimental electronic music. Joram Roukes — that’s his real name — is a painter and muralist from the Netherlands. He’s been painting large-scale murals in cities and countries around the world since 2015 and describes his work as “a dark, humorous play on topics that range from popular culture, global affairs and personal experience.” After living and working in Brooklyn and Los Angeles, he moved back to his hometown of Groningen in the Netherlands. This Brandon Sadler mural — he’s done many — is beneath the bridge at 587 Virginia Ave. NE.

Brandon Sadler creates under the name Rising Red Lotus, which is also his credo. It refers to the story of the lotus, whose roots were sown deep in the mud of good and evil. It gathered nutrients from both and rose to the surface to become whole. “I like things about ascension,” he said in a recent Q&A with ARTS ATL, “coming from a very ugly, misshapen, maybe even slightly dark and evil space to something powerful, beautiful and spiritually sound.” Although he’s been working for years, Sadler may be best known for a mural that appears in the feature film Black Panther, which was shot in Atlanta. This Fabian Williams mural is at 587 Virginia Ave. NE.