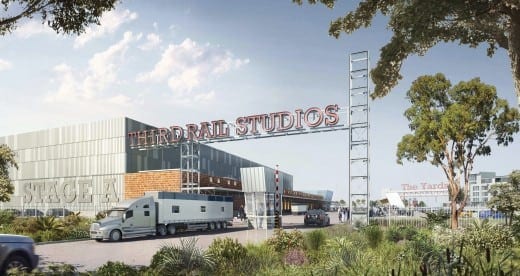 What if Georgia replaced California as a filmmaking destination?

It’s not so farfetched when you realize that the state is already ranked as one of the top three locations for movie and television productions, according to Lee Thomas, deputy commissioner of the Georgia Film, Music and Digital Entertainment Office. Last year alone, Governor Nathan Deal reported, 158 feature film and television productions were shot in the state, generating $1.4 billion.

The growth of the state’s film industry, especially in Atlanta, has been so rapid that local businesses are scrambling to keep up with the demand for state-of-the-art production services and sound stages to accommodate major Hollywood studios and corporations who are bringing their production work to the region.

“Before, we couldn’t accommodate these giant shows like a Marvel [film],” Thomas states, “because we didn’t have the facilities for it. Now we have not only the ability to accommodate them but we have options for them.”

Pinewood Studios, EUE/Screen Gems, Eagle Rock and Triple Horse are just a few of the other large-scale studio facilities in the area that are attracting major film and television productions.

Third Rail Studios, a 270,000-square-foot space on the former site of the General Motors Assembly Plant in Doraville, is the newest hat in the ring. Unlike the others, however, the studio will be the nucleus of a major media complex called ASSEMBLY, Doraville, USA.

A co-venture of the Integral Group and Capstone South Properties, ASSEMBLY is intended to facilitate what Capstone chief Michael Hahn calls “creative convergence.”

The project will include space for production support, administrative offices and the Yards district, a destination for dining, entertainment and synergistic businesses, such as studios for music recording, animation, video games and graphic designers. Hahn expects Third Rail Studios, named for the three rail lines that served the plant, and part of the Yards district to open by the end of this year. The rest will be completed in stages.

For people who don’t work in the film industry, the term movie studio is likely to conjure up Hollywood visions of Universal or Paramount, which are totally invested in producing motion pictures and media entertainment on their lots.

But most Georgia movie studios are sound stages for rent. Their clients are production companies, which hire their own crews. This model is becoming more commonplace, even in Hollywood where independent companies are building studio spaces that are leased by Sony or Fox or other major film companies. There are, of course, exceptions such as Warner Bros. in Burbank, CA, and Tyler Perry Studios in Atlanta, which still shoot their own productions on site and don’t lease them out to competitors.

The recent film industry boom has increased demand not only for spaces but also skilled crew and technicians. Filling that need might have been a problem in past years, but it has lessened as locals have developed expertise working on local shoots and, as Thomas says, “retool from other skill sets and become film people.”

The state is preparing to help provide training through Governor Deal’s High Demand Career Initiative, a collective effort of the Georgia Department of Economic Development, the University System of Georgia, the Technical College System of Georgia and leaders in the entertainment industries.

In addition, the boom has attracted skilled professionals from out of state. “Since 2008, more than 90 companies have located in Georgia to support the [film] industry,” reported Chris Carr, commissioner of the Georgia Department of Economic Development.

Ask Hahn, a native Georgian who returned four years ago after spending 15 years in California. “It’s much less competitive and a lot more affordable to live here and raise a family,” he says. “I call it [the cost of living] the invisible tax credit.”

If ASSEMBLY becomes the all-inclusive one-stop shop its developers envision, it may become yet another reason for the film industry to migrate south.