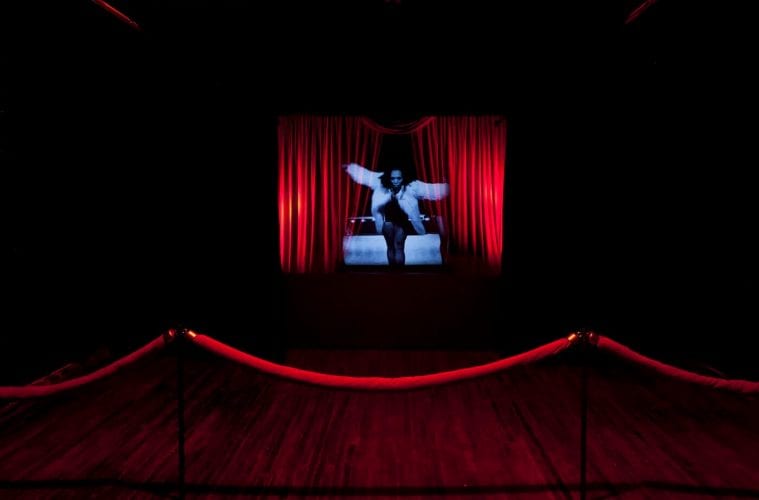 “The more I go over it, the more I see in it”: Zuckerman Museum of Art’s “Medium”

Fourteen years before his brother Henry published The Turn of the Screw, one of the most widely read ghost stories in Anglo-American literature, the philosopher and psychologist William James was among the founders of the American Society for Psychical Research. The organization, first incorporated in December 1884, grew out of scientists’ and mathematicians’ interest in investigating paranormal activity — phenomena including ghosts, clairvoyance, near-death experiences and telepathy — using scientific methods.

In preparation for the exhibition Medium, open at the Zuckerman Museum of Art through December 3, curators Teresa Bramlette Reeves and Justin Rabideau traveled to the offices of the American Society for Psychical Research in New York to conduct research in the organization’s archives. Some of this archival material, such as spirit photography from the late 19th and early 20th centuries, is on view in Medium alongside work created over the past 40 years by 11 artists including Georgia visionary painter John Bunion Murray, Irish video artist Susan MacWilliam and American contemporary art icon Carrie Mae Weems.

While the exhibition’s supernatural motif provokes curiosity and stimulates the imagination, Medium disappointingly lacks the consistency and focus one hopes to find in such an ambitious museum show. This is not because of the combination of archival materials with art but is instead the result of certain artworks falling short of the vibrant appeal of others, or appearing only tangentially related to the exhibition’s central themes. Despite the fascinating quality of many of the elements it brings together, ultimately the allure of Medium depends on the strength of individual artworks instead of its cohesion as an exhibition.

Installed in handsomely crafted tabletop display cases, the spirit photography Reeves and Rabideau retrieved from the archives of the American Society for Psychical Research receives a sly contemporary update from Minneapolis-based photographer Lacey Prpić Hedtke in her series Ectoplasm Selfies. Originally created through a collaboration between Hedtke, the Boston Center for the Arts and the Boston LGBTQIA Arts Alliance, the series draws upon the turn-of-the-century practice of using ectoplasm — a thin white substance made from combining materials such as flour, egg whites and netting — to create purported photographic images of spiritual energies.

As in the photographs of queer French medium Eva Carrière and her partner Juliette Bisson, Hedtke’s black and white images show dimly lit figures pulling the ectoplasm out of their mouths and ears, or draping it across their bodies, giving the impression of an escaping spirit or pestilent ghoul. Instead of presenting this spectacle with the mock seriousness of Carrière’s turn-of-the-century séances, Hedtke intended for the interactive workshop that produced Ectoplasm Selfies to provide participants a chance to fashion strange, sometimes humorous self-portraits that depict their complex identities. Stephanie Dowda, I Can See You When I Close My Eyes, 2015. (Courtesy of the artist.)

Photographer Stephanie Dowda, who maintains strong ties to Atlanta as she pursues an MFA at Virginia Commonwealth University in Richmond, similarly draws upon early photography techniques employed by occult aficionados. For the diptych Trails, previously exhibited earlier this year in her inaugural solo exhibition at Whitespace, Dowda inserts a circular piece of convex black glass known as a Claude glass (or, more simply, a black mirror) between two large prints showing shadowy landscapes.

Although also famously used by 18th-century English picturesque artists to frame landscapes, the Claude glass was employed by occultists as a tool for scrying and divination. Through the black mirror at the center of Trails, Dowda adeptly invokes both of these histories and in doing so subtly draws attention to the intersecting legacies of late Victorian occult practices and the medium of photography, which developed contemporaneously at the end of the 19th century.

P. Seth Thompson, another artist familiar to Atlanta audiences, takes a markedly different direction in his photographic contributions to Medium. Veering away from the somber tone of Dowda’s work and straight into American pop culture, Thompson’s signature glitchy technicolor images depict the character Carol Anne Freeling from the 1982 film Poltergeist, as well as a scene from television coverage of 18-month-old Jessica McClure being trapped in a well in her aunt’s backyard in October 1987. The Poltergeist image is a funny but apt inclusion in Medium, a brightly sour piece of candy amidst a sometimes-heavy meal, and a reminder of ghost stories’ campy genre descendants. The “Baby Jessica” photograph, however, seems more connected to Thompson’s personal body of work than the exhibition in which it appears.

Other artworks in Medium are even farther afield. The paintings of J.B. Murray, a self-taught visionary artist from Glascock County, Georgia, barely fit into the show’s séance-related theme. While they were indeed produced through Murray’s spiritual experiences, the explicitly Christian worldview with which they were created seems distinctly separate from the more conventionally understood notions of the supernatural that dominate the rest of Medium. Installation image of Shana Robbins, The Other from Culture Creatures (detail), 2017. (Courtesy of the artist. Photo by Mike Jensen.)

The most confusing — and downright troubling — inclusion in the exhibition is the work of Atlanta-based artist Shana Robbins, which incorporates what the artist refers to as “shamanic” practices and “earth-based rituals.” While most of the work in Medium acknowledges the artificiality of many paranormal phenomena and uses this as an entry point into investigations about paradoxes of belief and reason, Robbins’s work is oddly self-reverential. In the costumes and objects she creates, which are displayed at the Zuckerman alongside two video installations showing Robbins performing while wearing these vestments, the artist appears to draw overly generalized references from various indigenous cultures, such as antler-shaped headdresses and ceremonial masks.

In an exhibition that is partially built around actual archival material, the inclusion of these pseudo-artifacts scrambles any sense of consistency regarding the terms of the conversation being proposed about authenticity and artifice — and all of this would be mystifying enough without the wall text’s repeated allusions to the artist’s previous career as a fashion model. In the context of Medium, Robbins’ work is distracting and distasteful at best, and at worst, swiftly approaches offensive cultural appropriation.

By contrast, the most convincing artworks in Medium are, like the supernatural experiences on which the exhibition is built, those whose sensory effects are the most entrancing, bewildering and delightful. For the installation A Graves Worth, the result of a surprisingly effective pairing between Atlanta dancer and choreographer T. Lang and artist George Long, the collaborators traveled together to Mississippi, where she, a black woman, and he, a white man, can both trace their families’ bloodlines.

A clear rectangular pillar, upon which the creeping image of roots is intermittently projected, holds soil gathered from each artist’s family land, and the surrounding space is swaddled in billows of thin translucent cloth that appear to show shifting images of clouds, vapor or perhaps ancestral spirits. (Though the accompanying materials make no mention of it, according to the docent in the gallery, the pillar also contains the ashes of Long’s mother.) With Medium opening just weeks after the racist rally that led to one woman’s death in Charlottesville, the latest in a string of violent and often fatal incidents contributing to a heightened sense of racial tension in the US, the efforts toward reconciliation symbolized by A Graves Worth deliver a viscerally potent blow to the viewer.

Along with this collaboration between Lang and Long, the standout work of Medium is undeniably Carrie Mae Weems’ video installation Lincoln, Lonnie, and Me. Regardless of the exhibition’s multiple missteps, seeing Weems’ installation in person makes the trip to the Zuckerman worthwhile. The 15-minute-long video uses a 19th-century illusion known as Pepper’s ghost — a technologized version of which was employed at Coachella in 2012 to create the impression of Tupac Shakur performing onstage with Snoop Dogg — to make the spectral figures of people including Abraham Lincoln, a boxer, a Playboy bunny and a Civil Rights protester briefly appear, then vanish, between red velvet curtains within an enclosed theater.

Playing over a wide-ranging soundtrack that features the 1967 Neil Diamond single “Girl, You’ll Be A Woman Soon” as well as audio of the Gettysburg Address and haunting blues songs, Lincoln, Lonnie, and Me shows Weems returning to her perennial subjects — American representations of race and gender — with astonishing technical flair. Far more than any other artwork in Medium, Weems’ installation provides the viewer precisely the kind of ineffable sensory thrill you expect from a worthwhile séance, regardless of whether or not it convinces you to believe in ghosts.

Medium will be on display at the Zuckerman Museum of Art through December 3, 2017.