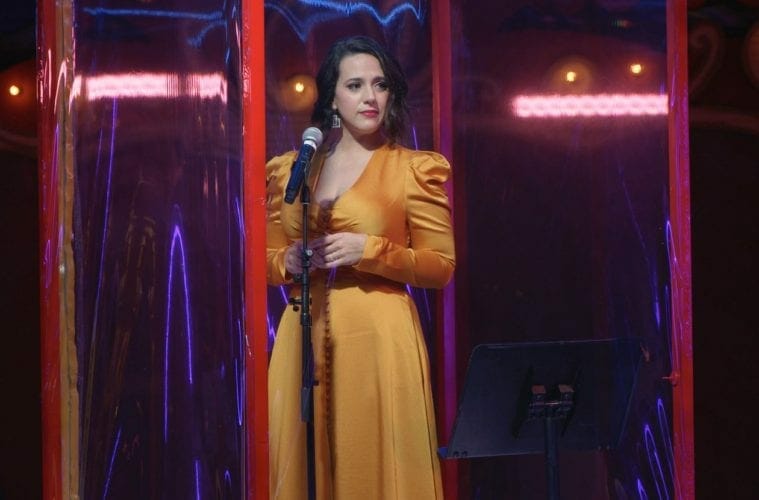 Daniela Mack sings in The Atlanta Opera's "Mezzo Extravaganza," one of its online offerings that have gained national attention for innovation during the pandemic. (Photo by Felipe Barral)

“Georgia on My Mind” is one of the well-known songs featured in “Love Letters to Atlanta,” a new video series launched on The Atlanta Opera’s Spotlight Media streaming service. Sung by mezzo-soprano Jamie Barton as a tribute to her home state, it’s a perfect illustration of the series and the company’s innovative pandemic-era programming.

In the videos, Tomer Zvulun — the company’s general and artistic director — asks the opera’s company players to share their stories and sing at a historic Atlanta venue that has personal resonance for them. The opera formed the company players with singers who are world-renowned, living in Atlanta and the Southeast, and were out of work after COVID-19 shut down opera houses worldwide. Tomer Zvulun and The Atlanta Opera pivoted to outdoor performances under a big tent nine months into the pandemic hit.

Zvulun was looking for new opportunities for the company players and wanted to tell their stories. “We also wanted to pay homage to these iconic places in Atlanta,” he says.

The opera is also streaming filmed versions of the two shows it performed during the company’s highly successful Big Tent Series at Oglethorpe University in October and November, Pagliacci and The Kaiser of Atlantis. Also available is the “Mezzo Extravaganza” concert from the tent with Barton and mezzo-sopranos Gabrielle Beteag, Daniela Mack and Megan Marino.

The efforts have brought national attention to the company. The series “demonstrates how imaginative direction can harness COVID restrictions for artistic effect,” The Wall Street Journal’s Heidi Waleson wrote in a recent review.

The first three “Love Letters” videos are now online. Barton and bass Morris Robinson (who was singing Porgy in Porgy and Bess when venues were shut down last March) chose the Fox Theatre. In his video, bass Kevin Burdette walks through the Atlanta Civic Center, which for decades welcomed the Metropolitan Opera’s hugely popular Southern summer tour.

All three artists are Atlanta residents. Zvulun interviews each at their chosen venue before their singing brings life to unadorned stages in empty auditoriums. Robinson lets it rip with “The Impossible Dream” and shares a deeply emotional memory of his mother. Burdette is the first singer to perform on the Civic Center stage since the concert hall was shut down seven years ago. He lends his rich bass to “If Ever I Would Leave You” from the musical Camelot. Barton recalls being in the Fox as a 5-year-old, so excited to see Sesame Street’s Big Bird onstage. The videos are being offered free through February 14. Zvulun considered making them available to subscribers only (the streaming service is $15 a month or $99 a year) but decided instead to make them a Valentine’s gift to Atlanta. “We want to bring this content to as many people as possible,” he says.

Zvulun plans to feature more of the 12 players soon. Sopranos Jasmine Habersham and Talise Trevigne, and baritone Reginald Smith Jr., will be next, in locations not yet finalized. “We hope to explore venues like Spelman College and Ebenezer church so we have an amalgam of places in the series — but our plans are fluid,” Zvulun says.

Key to the formation of the company’s streaming service is Ashley Mirakian, chief of marketing and audience development. “We were planning our digital model before the COVID crisis,” she says. “But the pandemic accelerated everything. What used to be two years in the planning is now two months. The streaming service is for people where they are, and where they are now is home.”

When all the “Love Letters” videos are finished, they’ll be edited into a film and streamed online. Emmy winner Felipe Barral, who’s also the videographer for ArtsATL, is the series’ filmmaker.

Zvulun says he believes that the company-players model, where artists are hired for a season, is the way of the future. It’s already the practice in Europe, he says, and it serves both the artists and the company. The singers get stability with health insurance, benefits and a weekly stipend. They’ll receive additional compensation when they’re cast in post-pandemic mainstage productions while being free to fulfill their COVID-delayed contracts with other companies. Their proximity to Atlanta allows the company to enrich its love affair with the city. It also involves big savings — no travel costs.

Zvulun has turned the COVID-19 shutdown into an opportunity. “Our endowment is the largest it’s ever been,” he says. “We haven’t seen a big decline in donations and we created a new business model that cost us less because the opening of our season was in a tent.” Then he quotes Louis Pasteur: “Chance favors a prepared mind.”