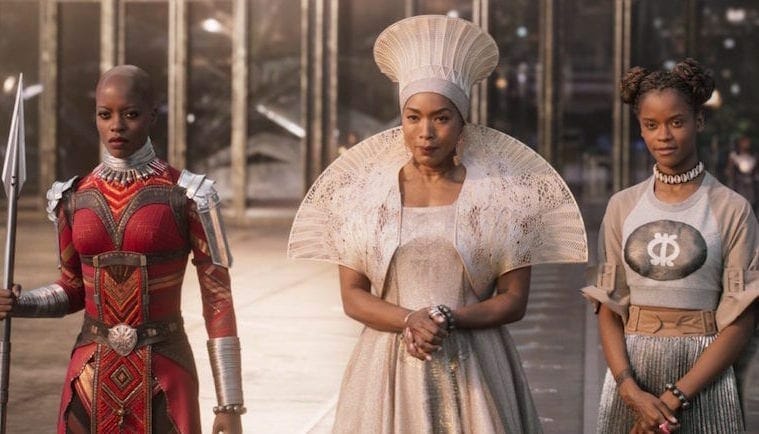 “People think I sew, but that’s not really what I do,” Ruth E. Carter says in the Netflix design series Abstract. “What I do is tell stories.”

Carter, a history-making, Academy Award-winning costume designer, fashions herself a storyteller above all else, speaking in a language of darts and pleats, seams and hems. Growing up, it wasn’t fashion designers she looked to for inspiration. It was writers. Visitors can see more than 60 of Ruth E. Carter’s designs — from “Black Panther,”  Malcolm X,” “Selma” and more — through September 21.

“People assumed I became a costume designer because I love fashion, but that wasn’t it at all,” she says in Abstract. “My heroes were Langston Hughes, James Baldwin, Nikki Giovani, Sonia Sanchez. Playwrights. Poets.”

In the film Selma (2014), Carter tells the story of the civil rights movement through the overalls, white shirts and black ties of Student Nonviolent Coordinating Committee members, the white pearls of Coretta Scott King, the khaki trench coat and backpack of John Lewis. In Spike Lee’s Do the Right Thing (1989), she helps us see the ever-lingering realities of systemic racism and bigotry through what Spike Lee called the “Afrocentric bright” colors of costumes for characters like Mookie, Tina and Radio Raheem.

And in 2018’s Black Panther, Carter helps create an Afrofuturistic new world through her use of techno-fantastical 3-D headpieces, beaded battle wear and warrior armor, inspired both by the science-fiction worlds of the future and the vibrant and varied African tribes of the past and present.

Viewers can see more than 60 of Carter’s visionary designs, including fan favorites from Black Panther, in the exhibition Ruth Carter: Afrofuturism in Costume Design, on view through September 21 at the SCAD FASH Museum of Fashion and Film in Midtown.

Carter, now 60, began her career designing theater costumes while attending Hampton University in Virginia. In the mid-1980s, after graduating, she made her way to Los Angeles, where she met Spike Lee. The pair would go on to collaborate on more than 10 films, including Do the Right Thing and Malcolm X (1992), with  Denzel Washington. A costume for Mookie, played by writer-director Spike Lee, who called “Do the Right Thing’s” design “Afrocentric bright.” (Photo by Beth Ward)

Carter also has worked on such films as Amistad (1997) and Dolemite Is My Name (2019), the TV series Serenity (2005) and the 2016 reboot of Roots, for which she earned an Emmy Award nomination. Carter also is responsible for Samuel L. Jackson’s iconic look in Shaft (2000).

Carter’s work evokes entire histories of a place and time, whether it’s Brooklyn’s Bed-Stuy in the late 1980s, the civil rights movement in the South in the 1950s and ’60s or a slave ship in 1839. She reveals the truth of a film’s characters in the tying of a dress bow, the tip of a hat, the drape of a zoot suit or a head wrap made from a tattered American flag.

Credit Carter’s near spiritual devotion to research. To conjure the past or imagine the future, she pours relentlessly over magazines and newspaper clippings, digs through old letters and photos, and hunts through archives. She stands on street corners and people watches, and spends hours devouring library books.

For Malcolm X she contacted the Department of Corrections in Massachusetts, requesting his personal files in a letter-writing campaign. “I went to Boston, and I sat there, and I read all of his letters, and I went through his booking photos and I was able to actually connect to the person,” Carter told ArtsATL.

In the photos and letters and medical records, Carter searched for Malcolm’s spirit, puzzling out who he was as a man — as opposed to just a film character — so she could accurately resurrect the story of his life.

“I needed to be really acquainted with his voice in order to decide on what pajamas he’d wear to bed,” she says. “When they bombed his house and he ran outside with his children, what did he have on?”

The same was true for Selma. Carter says she spoke with people who’d attended the Selma-to-Montgomery march as children, about what they felt, what they saw, what they remembered. She designed the costumes in service to the truth of those memories and thought deeply about what the clothes might’ve meant to the people walking across the Edmund Pettus Bridge.

Credit Ruth E. Carter’s near spiritual devotion to research for the details in her designs, including the dresses of five little girls from “Selma.” (Photo by Beth Ward)

“I find that immersing yourself in research really does give you the heart and soul of what you’re doing, no matter what role you’re playing on film,” she says. “For me, for costumes, I notice more. When men have their hands inside the pockets of their trench coats as they’re marching, it means nonviolence. And I connected to that . . . so, not only am I creating costumes, I’m also creating a story and a mood.”

The section of the SCAD FASH show dedicated Selma is particularly poignant. In the center of a large display are five small dresses, costumes for the five Black schoolgirls who were victims of the 1963 bombing of Birmingham’s 16th Street Baptist Church — Addie Mae Collins, Denise McNair, Carole Robertson and Cynthia Wesley who died, and Sarah Collins Rudolph, who was severely wounded but survived. Surrounding those dresses are costumes worn by the characters playing the Rev. Martin Luther King Jr., Coretta Scott King, John Lewis and others.

The power of those little dresses is their ability to make viewers see just how young and innocent these girls were, dressed for church in their Sunday best with their delicate bows and tiny flowers sprayed across the fabric. Through her costumes, Carter helps audiences recognize just how precious their lives were and how vicious the racist violence against them.

Afrofuturism, a term coined in 1993, is a cultural aesthetic ideology that imagines a future of Black empowerment and liberation through a kind of science-fiction lens. Afrofuturistic work explores Black identity and struggle, and is a means through which Black contributions to science and technology can be celebrated. It’s a movement — through the music, literature and art of such visionaries as Octavia Butler, Janelle Monáe and Sun Ra — that allows an imagining of a world where Black people are joyful, thriving and free. Queen Ramonda’s epic crown, a symbol of female power and regality, was created with 3-D printing and inspired by traditional South African marriage hats. Shuri’s colorful, beaded ceremonial garb was inspired by the South Sudan’s Dinka people. The ring collars of the fierce Dora Milaje are a nod to the Ndebele women of South Africa, and W’Kabi’s heavy blue wrap pulls from the Basotho blankets of the Sotho people of South Africa. The film featured 200 of these blankets, all produced in Africa and screen-printed by Carter’s team with Wakanda text and Adinkra symbols of Ghana.

T’Challa’s Black Panther suit features repeating triangle patterns, symbolic of the sacred geometry of Africa. To Carter, this emphasized that “he’s not only a superhero, he’s also an African king.”

For Carter, imagining Black futures — including her own — is part of the work she does in all her films, even when they’re set in the past.

Last year, during a Black Lives Matter protest in Oakland, California — following the string of deaths of Black people by police, “Wakanda Forever” was projected on the face of a building. Black children can now wear T’Challa or Dora Milaje costumes and become the Black heroes and superheroes of their wildest imaginations. Such is the magic of clothes.

The work of a visionary like Carter acts as a portal transporting us to the past, reminding us of its lessons. It’s also a map guiding us forward, showing us how we might build more equitable worlds. And what we might wear when we get there.