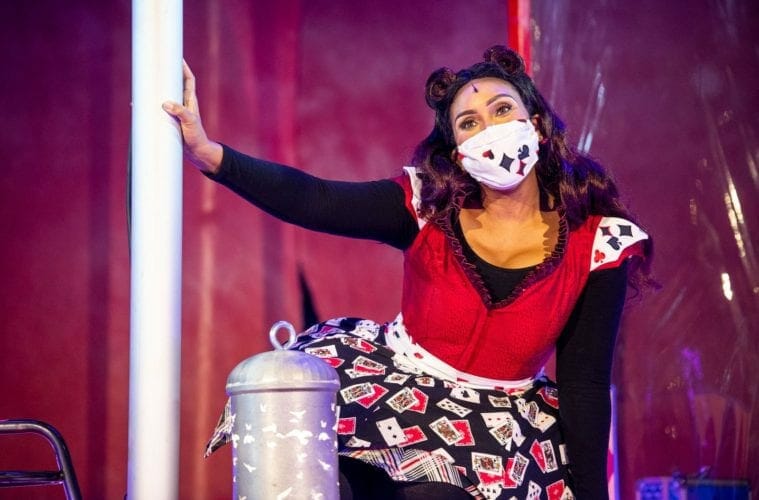 In one of the duel shows in the Atlanta Opera's Big Tent Series, soprano Talise Trevigne finds comfort in the birdsong during "Pagliacci." (Photo by Rafterman)

Ah, the opera. Is there anything grander? The soul-stirring arias, the elaborate costumes and sets, and . . . the earthy aroma of fresh wood chips underfoot.

Since the COVID-19 pandemic began, art forms as we knew them have shifted by necessity toward weirder, wilder formats. As imaginatively realized by The Atlanta Opera with its new Big Tent Series, this development is a welcome breath of fresh air, literally and figuratively. The series is a bold move by the company when most others have gone dark — New York’s Metropolitan Opera, for example, has canceled its entire 2020-21 season.

The innovative series, which runs through November 14, offers alternating productions of Ruggero Leoncavallo’s Pagliacci and Kaiser of Atlantis by composer Viktor Ullmann and librettist Peter Kien.

The productions take place in a circus tent flanked by portable toilets (the fancy kind that flush!), multiple operations stations and a separate tent for the orchestra. The big tent itself can seat up to 240 people. Like a real traveling circus, The Atlanta Opera has set up shop on foreign ground — in Brookhaven on Oglethorpe University’s baseball field, home of the “Stormy Petrels” as the scoreboard outside says. (General and artistic director Tomer Zvulun cheekily called it opera’s Field of Dreams as he introduced the show.)

Before the opera begins, patrons must proceed through a series of safety protocols, including a temperature check and completion of a health survey (available on the Atlanta Opera app), which asks questions about recent symptoms of, or possible exposure to, COVID-19. Performers — such as baritone Joseph Lattanzi as Silvio in “Pagliacci,” wear masks onstage, except when they’re in clear vinyl pods. (Photo by Ken Howard)

Then an usher leads you to your “pod,” a series of four chairs spaced out 6-ish feet from others. You’re required to keep your mask on, even if you need to temporarily lift it to sip a beverage. You’re discouraged to  get up and wander, though honestly, that last directive is inconsistently practiced and enforced.

Audience members aren’t the only ones taking precautions. The performers wear masks and maintain distance from each other, too, only removing the coverings when they enter enclosed, clear vinyl “towers” that look like plastic toy boxes from a dystopian Nutcracker.

Pagliacci, the more famous and classical choice of the two operas, is full of pop-culture references — to Smokey Robinson’s “Tears of a Clown,” Seinfeld and Alan Moore’s graphic novel Watchmen, among others.

It tells the story of the lead clown, Canio, in a commedia-dell’arte acting troupe, who’s driven by jealous, possessive rage to kill wife Nedda and her lover, Silvio. The piece’s famous last line, uttered amid a stage strewn with bodies, may be one of the best ruefully funny endings of all time.

Then there’s Kaiser, a one-act satirical fable of sorts that takes place during an authoritarian regime, a time “where the living no longer laugh and the dying have forgotten to die.”

Death is, essentially the show’s protagonist. He goes on strike because he can’t keep up with the rising tally of corpses. This sparks the ire of the title dictator, who sits for most of the show in one of the see-through boxes, scribbling gibberish on the walls and demanding to know why executions are taking so long. He has the air of someone demanding to speak to a restaurant manager about undercooked food.

There are jugglers and clowns in both shows, but the circus performers in Kaiser almost have a Mad Max/apocalyptic steampunk quality. The Harlequin character is dressed like a haggard, traumatized Peter Pan, with hollow diamonds for eye sockets, caked-on makeup and a ragged ruff.

Kaiser, a testament to art’s ability to cut through and persist amid horror, was written in 1943 in the Theresienstadt concentration camp. Ullmann and Kien both died in Auschwitz, but their work lived on, passed from Ullmann to a fellow prisoner who survived, and changing hands several times until it was first produced in 1975. Soprano Jasmine Habersham sings the role of The Girl in “The Kaiser of Atlantis.” (Photo by Rafterman)

As a nod to the Shoah’s atrocities, the stunning and surreal production design features as its central set piece a mountain of shoes, conjuring one of the U.S. Holocaust Memorial Museum’s most haunting exhibits.

What the Atlanta Opera has tapped into with this venture is remarkable. These two shows feel rare, intimate, challenging and unpredictable. In front of our live-performance-starved eyes, the tenacious cast, musicians and crew must wage battle against almost constant disruption from bugs, erratic temperatures, traffic and MARTA noise — even hecklers, in the form of noisy neighbors on their balconies at an apartment complex nearby.

There’s no controlling outdoor theater, and things can change in the blink of an eye, which requires constant flexibility — but that’s also some of what’s exciting about it. This was no more evident than the October 28 performance of Pagliacci, hours before Tropical Storm Zeta hit Atlanta full force.

About halfway into the performance, the sky suddenly opened and rain began to soak the tech crew situated at the tent’s outer edges. Staff instantly scrambled for raincoats and umbrellas and began to close the tent flaps, though not in time to stop a direct stream of water from drenching the sound engineer and his equipment.

One character’s mic began to short, fading in and out, although the actor gamely continued to sing — still managing to fill much of the tent with his voice. Finally, the action onstage came to a halt so the sound system could be rebooted.

Spectators waited patiently while the ladders, industrial-strength toolbox shop towels and what sounded like a hairdryer came out. The opera crew worked gingerly, with expressions of deep concentration. The actors onstage remained in character, as if someone had simply hit the pause button.

It was real life seeping into the show — a play within a play within a show within a spectacle. The constant upending chaos of 2020 had struck again, and our collective ability to adapt quickly and collectively to mitigate further damage was all that would allow us to resume.

After 10-15 minutes of steady intervention and uncertainty, the sound snapped back on, and a sigh of relief ricocheted through the crowd. The show must, and did, go on, rebounding with the energy of a fully invested audience behind it, everyone committed to doing whatever it takes to see the story through to the end.