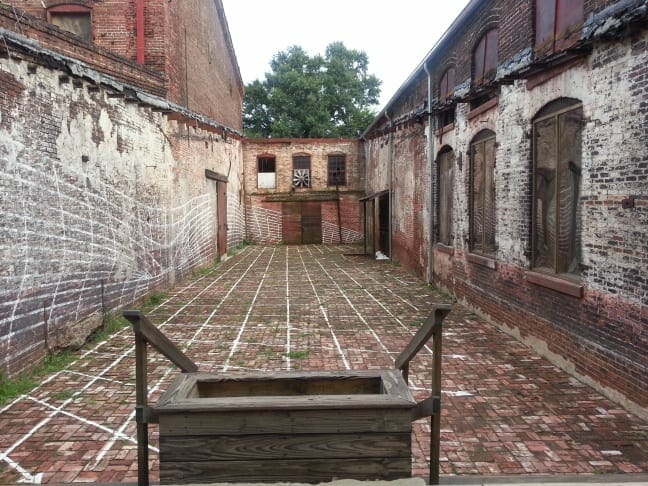 The Goat Farm Arts Center on Foster Street in West Midtown, more or less as it looks today (Photo by Mark Wentzel)

The Goat Farm Arts Center, where construction crews will soon take up residence, is open until October. There’s still time for coffee at the Warhorse, walking the grounds and hearing chickens cluck. Artists still leave their studio doors open and are still at work for now.

As ARTS ATL reported in May, owner/developer Anthony Harper is partnering with TriBridge Residential and Tungsten Partners for a $250 million upgrade that will densify the site and add 375,000 square feet of new construction (a hotel, more art studios, two restaurants, a coffeehouse and residential and office space), plus a permanent home for MOCA GA. The project is expected to take 18 months to two years. An aerial rendering shows what the new Goat Farm Arts Center will look like. (Courtesy of the Goat Farm)

What does that mean to the artists who have called the rough-hewn 18th-century brick buildings and their surroundings home? It depends.

Goat Farm management is helping tenants and residents find interim spaces, but a fear of displacement reverberates among them. Some artists remain resilient and hopeful; others fear the new Goat Farm will be a Trojan horse.

Affordability is a big concern. Those who live and work there have been guaranteed first pick of studio space at the same rental rates, but they wonder how long the new spaces will remain affordable. Some lament the loss of free and open space (goodbye, chickens and goats). Some are thankful the Goat Farm will exist in any form.

As it stands today, the Goat Farm is secluded on West Midtown’s Foster Street, away from the buzz of Howell Mill Avenue. As such, it’s protected from the city and encroaching development. Will a busier Goat Farm lose that sense of seclusion? Artists say the property is a necessity in a city where art communities are sparse and disjointed. Their largest concern, by far, is the loss of community.

ART ATL talked to at least a dozen artists for this piece, many of whom asked not to be named or quoted. These five artists reflect the concerns and excitement of many. “I love the rawness, the open space, the way it’s just real,” Marinelly Piñango says of the Goat Farm. “You can see history within the walls.”

“A studio is a very intimate space. It’s where the real aspects of yourself come out,” says Atlanta artist Marinelly Piñango. She moved from Spain to Atlanta in 2013 with her family.

She creates structural collage, mixed-media and watercolor abstractions. Trained as a linguist, she didn’t seriously pursue an artist’s life until coming to Atlanta. She found her suburban home studio suffocating and isolating and began looking for open space and community.

She was drawn to the Goat Farm by its affordability, space and aesthetic. “I love the rawness, the open space, the way it’s just real,” she says. “You can see history within the walls of it. It transported me to the way things are in Europe, a little run-down, but there’s beauty in that. It’s rustic.”

When renovations were announced, Piñango left the Goat Farm space she’s shared for two years and returned to her home studio. She intends to move back but worries that the community will not. “I hope that aesthetically they preserve the uniqueness; that identity is irreplaceable.” “We’re going to lose this tight-knit thing because anything could happen in two years,” says Linda Mitchell.

Mitchell has lived in Atlanta most of her life and has been a working artist before finding the Goat Farm through friends in 1990. She’s had the same studio space for 29 years, building a career mostly as a painter and assemblage artist using symbolic imagery to depict animals and nature.

Mitchell appreciates the community that the Goat Farm’s owners fostered through get-togethers, dinners and open studios. She knows it will change. “We’re going to lose this tight-knit thing because anything could happen in two years,” she says. “People move; people stop making art.”

Mitchell, who’s working with Goat Farm management to find an interim space, says she intends to return if rental rates remain as promised. “I hope to come back and still have some of the people and some of that feeling.”

She remembers when she paid $225 a month for a shared studio, and, despite excitement around the new plans and her relief that the Goat Farm will still be an art center, she’s sad. She speaks lovingly of her studio’s rich history, the high windows with skylight ceilings and floors coated in years of her mess.

“I’m all in. I want to do this,” says headshot photographer Tracy Page. “If I’m still working when this is finished, I want to be here.” “There are many people that are scared that this is going to lose its flavor,” says Tracy Page. “But I see this as something bigger.”

Page knew the Goat Farm was for her after having a meeting there. She’s worked at the West Midtown site since 2014 and for the first five years shared studio space with casting director and film producer Shay Griffin. In January, she moved to a loft space, where she works and lives.

As a commercial artist — Page mostly shoots headshots of film actors — she’s found it challenging to find community at the Goat Farm. She began to feel part of it just recently. With the Goat Farm as home base, she’s been able to take advantage of the film work done in and around metro Atlanta.

She, too, is working with Goat Farm management to find another live-and-work space. The spot where her loft now stands will be replaced by 60 live-and-work studio units. Still, she’s excited for the development.

“There are many people that are scared that this is going to lose its flavor, but I see this as something bigger,” she says. “There’s that fear of leaving what you know behind, but there still will be that air of familiarity.”

She plans to take advantage of opportunities the new Goat Farm will offer, including teaching spaces. As she moves into conceptual photography, she sees the new MOCA GA as an aspiration. The Goat Farm “has a mythical feel to it, like it’s not in the middle of a city,” says Eleanor Neal. “I don’t know how they’ll be able to keep that.”

“It will expand the idea of the art community in Atlanta,” says Eleanor Neal, who works with bee’s wax, specially treated paper, tree moss and other raw materials found in nature.

She’s been at the Goat Farm since 2014, after getting her M.F.A. from the Art Institute of Chicago. She was attracted by its feeling of community and because she knew other artists living or working there. “I liked the idea of a farm in the city, chickens and goats.”

Neal works on the floor, and the Goat Farm gives her space to spread out. She says she appreciates how easy it is to connect and collaborate with others there, from carpenters and painters to choreographers.

Neal will move to another studio space during renovations and, when asked if she’ll return, only says, “We’ll see.”

“It will be interesting to see how we keep that general feeling of the Goat Farm,” she says. “It has a mythical feel to it, like it’s not in the middle of a city. I don’t know how they’ll be able to keep that.”

“Glo and the Goat Farm have been in a romantic waltz since the beginning,” says longtime choreographer and conceptual artist Lauri Stallings, who leads the movement and social consciousness platform glo. “We would not be here today if it were not for the Goat Farm,” says Lauri Stallings of glo. “It’s not easy in Atlanta.”

The group began working in the Goat Farm’s Goodson Yard performance hall and has moved around the property over time. Stallings calls the location a father figure and says, “We would not be here today if it were not for the Goat Farm. It’s not easy in Atlanta.”

Stallings has been collecting objects, sounds, feelings and memories to take with her to glo’s new space at the High Museum of Art. “Things that have been calcified for years, that’s what I’m taking to the High.” Glo will be the High’s first artists in residence, finding a temporary home in Cousins Gallery. Stallings and glo eventually will return to the Goat Farm, she says, to a permanent space built for them there.