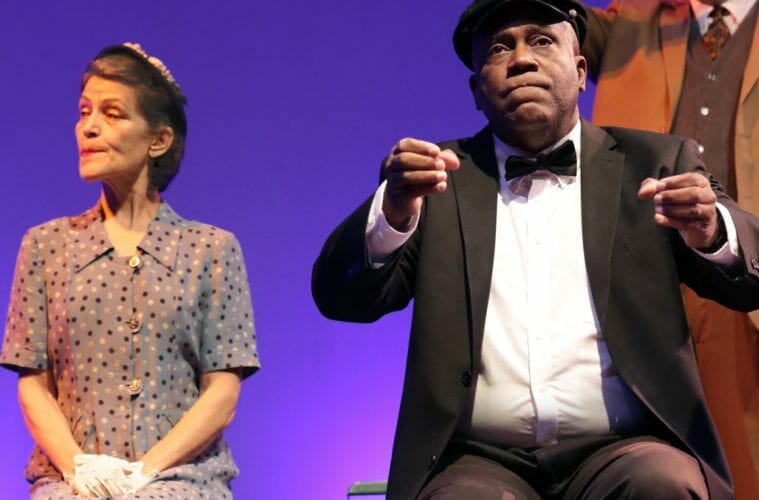 Some stories, though classically loved and valued, do little more today than reveal growingly irrelevant schools of thought. Driving Miss Daisy, which Georgia Ensemble Theatre has moved into Oglethorpe University’s Conant Performing Arts Center through July 21, is just such a story.

In 2019, it feeds into a mindset from the past — that tales with lovable black characters push the boundaries. They don’t. They do offer a glimpse into the way things were. They remind audiences how far we’ve come when we’d be better served if a few boundaries were pushed. Ellen McQueen plays Daisy Werthan, the Jewish widow who navigates aging in a bygone Atlanta (1948–1973). When Daisy’s son, Boolie (William S. Murphey), decides she should no longer drive, he hires a chauffeur for her, an African American man named Hoke Colburn (Rob Cleveland).

Daisy, with a script by Atlanta native Alfred Uhry, premiered Off-Broadway in 1987, winning the Pulitzer Prize for Drama in 1988. That same year, the dramatic comedy received its regional premiere at Atlanta’s Alliance Theatre, where it ran for two years and still holds the record as the company’s longest-running production. The Alliance’s artistic director at the time was Robert J. Farley.

Farley went on to cofound GET in 1992 and planned to direct this Daisy staging before retiring. He did neither, unfortunately, dying unexpectedly in November 2017 at age 69. Laurel Crowe, GET’s education director and Farley’s daughter, directs this iteration.

And so we come full circle.

Still, today, producing a classic whose core themes reflect antiquated views toward racial and religious tolerance feels uninspired. And this production’s set design — on the rather expansive Conant stage — makes it difficult to connect the story to its era. Instead of a fully realized rendering of Daisy’s home, a plain white backdrop is illuminated with color to mimic the changing seasons. Stand-alone set pieces leave it up to the audience to envision the home’s interior. Leaving so much space for interpretation removes theatergoers from the world of the play.

Do see this production for the caliber of its acting. The chemistry between and among its three characters is undeniable and effortless. Murphey and Cleveland have played their roles before and deliver masterful performances. McQueen may be new to Daisy, but her work is just as indelible.

Driving Miss Daisy‘s message of love, compassion and friendship still resonates. GET would do well, however, to look to the present and future rather than revisit the past.