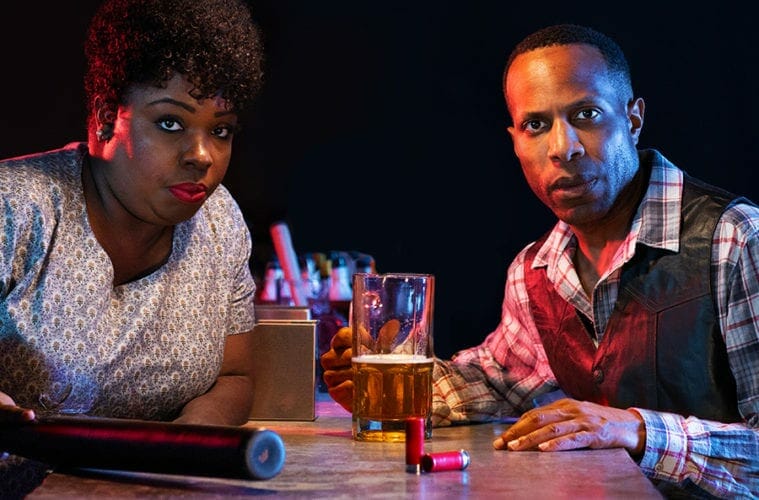 East Texas takes place in and around Charlessetta’s Top O’ the Hill Cafe in 1955, one of the only places black locals can find comfort and community. When rumors of Klan activity spread, the group must combat outside evils and resolve conflicts among themselves. East Texas projection designer Bradley Bergeron studied industrial design at Georgia Tech and does projections and lighting for theaters in metro Atlanta and beyond.

“My design is to the service of the subconscious,” Bergeron says. “If anything that I do during the show is noticeable to the audience, I’m not doing my job.”

Like most designers, Bergeron began with image research on the forests of East Texas. He decided to create a loblolly pine grove, so he rendered single trees into a 3-D model capable of producing digital trees with realistic lighting and structure.

“I knew it needed to be dimensional, and so I needed all the layers to play with,” he says. “It had to be more than just a flat Photoshopped image. This gives me all the tools I need so that during tech I have a palette to work with.”

The layering lets Bergeron add elements such as fog and motion to the trees, helping communicate the drama’s dark and ominous tones. His projections create an illusion of 3-D depth in 2-D images, and make a seamless transition from the set’s physical trees to the digital background.

“The ending of this show leaves you questioning lots of things,” Bergeron says. “But it’s also a reflection of a point in time in America that we are seeing aspects of again right now. It’s a great time to reevaluate and see we are all capable of crazy things.” A rendering shows the forest for East Texas Hot Links, opening July 16 at True Colors Theatre and running through August 11.