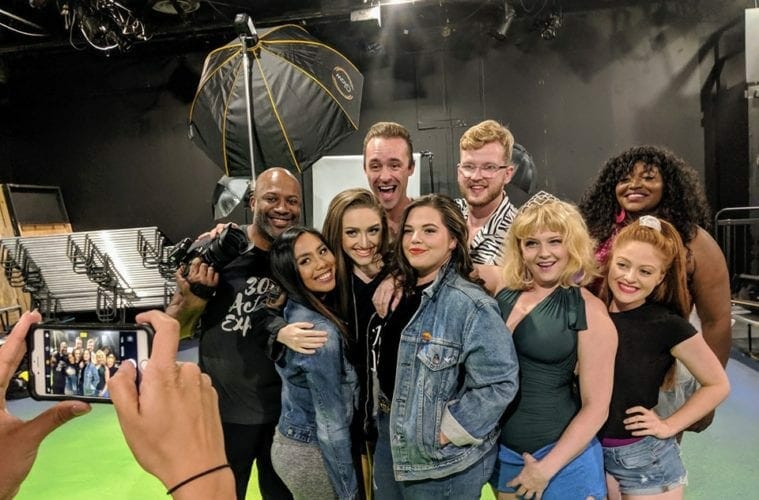 First Look: Actor’s Express to sing The Go-Go’s in “Head Over Heels” Costume designer April Andrew describes the look for Head Over Heels as “medieval punk.” (Photo courtesy of the designer)

The musical comedy tells the story of the kingdom of Arcadia through the songs of the all-female 1980s band The Go-Go’s. The celebration of love follows the romantic entanglements of the royal family as it tries to save the kingdom.

“Sometimes when a show has been done so much before, audiences come in with these expectations of what they want to see,” says costume designer April Andrew. “It’s fun to do something completely new.”

Andrew worked with director Freddie Ashley to develop a “medieval punk” style for this production, collecting images of 1980s- and Elizabethan-era fashions to create costumes that meld the two styles together.

Head Over Heels is Andrew’s second design for Actor’s Express. She did last winter’s An Octoroon as well. She has an M.F.A. in costume design/technology from the University of South Carolina; is the assistant costume shop manager at the Alliance Theatre; and has designed shows at the Alliance, The Walker School and for the Atlanta Symphony Orchestra. The costume design for Gynecia (Rendering courtesy of the theater)

“The fabrics are going to be mostly 1980s fabrics,” Andrew says. “We’re not sticking strictly to period styling. We’re taking some liberties with it. For example, Gynecia (Jennifer Alice Acker) has a 1980s-style tailor top but an Elizabethan-style whisk and skirt.”

The musical, running through August 25, features characters such as Pythio (Trevor Perry), a nonbinary (identifying as neither male nor female) oracle, and Musidorus (Daniel Crowe), who takes on the identity of an Amazon woman named Cleophila. Andrew took inspiration from these gender-fluid characters for ensemble looks that embrace nonbinary fashion.

Also in the cast are such familiar names as Niki Badua, Kevin Harry, Abby Holland, Jeff McKerley and Joseph Pendergrast.

“The ensemble looks a lot more ’80s than the rest of the cast,” Andrew says. “We wanted to play with masculine and feminine silhouettes, so most of our men are going to wear heels. One thing that’s important is that we celebrate everyone’s bodies. We want everyone to feel beautiful and sexy in whatever they’re wearing.”

Andrew is eager for Atlanta audiences to see this show — which had a five-month Broadway run in 2018–19 — and to engage with its extravagant characters.

“A fair amount of people have never heard of this show,” she says. “I think a lot of people are going to find it really empowering.”