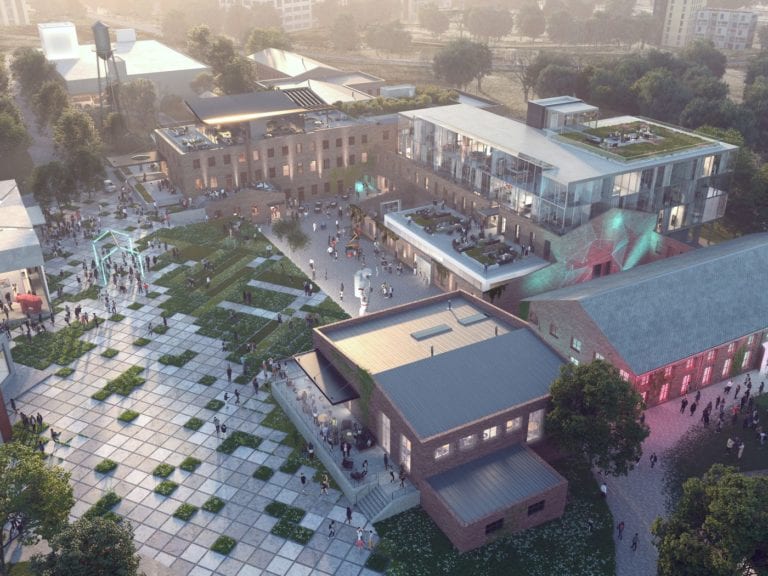 An aerial rendering shows what the new Goat Farm Arts Center will look like. (Courtesy of the Goat Farm)

When business and the arts come together, the scales usually tip toward business. For those with the cash, the arts are a marketing tool or object of philanthropy.

Developer Anthony Harper, owner of the Goat Farm Arts Center, is convinced that it’s possible to do good and do well at the same time. “We’ve been learning, by trial and error, how to be both an arts organization and developer,” he says.

The process began when the 2009 recession stymied his plans for a traditional mixed-use project at the West Midtown site along Foster Street. Instead, he went about turning the ramshackle 12-acre campus into an arts hub. He built on the special character of the 19th-century brick buildings, originally home to a cotton-gin factory, and the bucolic setting (think: goats and chickens).

He attracted tenants by welcoming the arts. He underwrote performances, exhibitions and residencies. He donated space for arts fundraisers. The Goat Farm became, to dredge up an old term, a happening place. Creatives fell in love with its ambiance, welcoming atmosphere and activity. Soon there was a waiting list for studio and residential space.

Now he and new partners — TriBridge Residential and Tungsten Partners — are betting $250 million that the hybrid model can succeed on a grand scale. The two-year project will densify the site, adding 375,000 square feet of new construction that will include a hotel, more art studios, two restaurants, a coffeehouse and residential and office space. Smith Dalia Architects is overseeing the project, which includes renovating most of the existing buildings.

Artists and arts groups, galleries and educational organizations will find more space than today. Artist-in-residence programs will increase from three to seven. Current tenants and partners, who will move offsite during construction, will get first crack at returning at a similar price point.  Many have registered to return already, Harper says. Using funds generated by profits, the Goat Farm will up its annual grants for performances, exhibitions and other projects from $200,000 to $500,000.

Moving MOCA GA to the Goat Farm was a key piece of the puzzle. Being sited at the entrance, the 28,000-square-foot building — designed by Merrill Elam of Mack Scogin Merrill Elam Architects — will announce “arts campus” better than any sign. The museum, now undertaking due diligence and planning a fundraising campaign, feels it, too, will benefit from the prominent spot.

“By relocating to the Goat Farm, MOCA GA will magnify its ability to provide resources to the creative community while simultaneously being more visible and accessible to the public,” says Annette Cone-Skelton, the museum’s cofounder and director.

Harper and team are working to ensure that artists and arts organizations at every level have spaces and a place at the table. “One thing we’ve learned is the ecosystem effect is a very real thing,” Harper said. “We like the idea of emerging-, middle- and higher-level arts organizations all sharing one campus in close proximity to each other. It’ll start to breed familiarity, play around with hierarchies,  pull things off pedestals, produce links and collaborations.”

Lee Walker, a TriBridge Residential managing partner and arts enthusiast, says the new residential construction is being designed to accommodate the diverse needs of the creative community. His team and Harper’s are exploring a range of price points and options, including live/work units, co-living and shared space.

“I’ve been a fan of the Goat Farm for years,” Walker says. “We are interested in this joint venture because of what’s there. It’s one of a kind.” He’s enthusiastic about the model of a sustainable creative community.

The distinctiveness of the Goat Farm and its arts-centric program are also what attracted Michael Bisordi, founder of New York’s Tungsten Partners, the firm doing the hotel. He said the Goat Farm’s uniqueness makes it a perfect site to experiment with a new direction in hospitality, one that focuses less on name brand than on the character of the location.

Building out the property was inevitable given the rising property values in West Midtown. The Goat Farm will lose some of its raggedy charm, but Harper and his partners say they’re committed to preserving the Goat Farm spirit.

“I know residential construction has something of a bad reputation,” Walker says, “but we are sincere about the mission. We want to honor and protect what is there.”

Still, don’t expect to see any goats or chickens when the Goat Farm reopens in two years. Human interaction, apparently, wasn’t as much fun for the animals as it was for the people. Harper has sent them to a farm sanctuary.