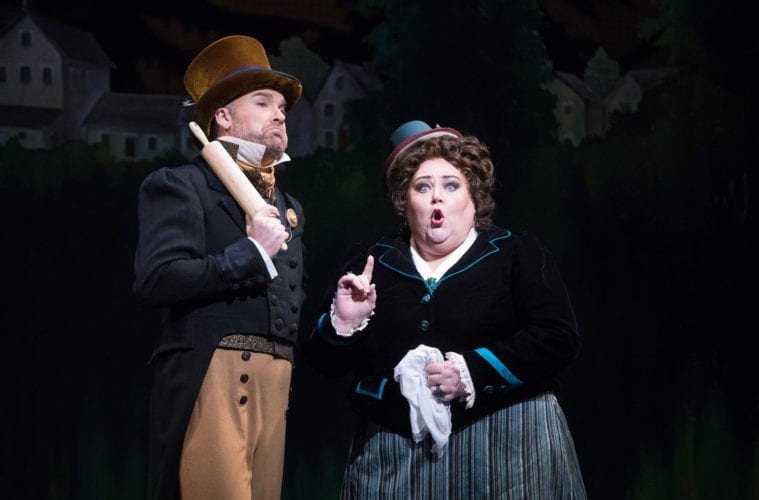 In 2018, Blythe sang as Marquise of Berkenfeld in the Atlanta Opera’s production of Donizetti’s The Daughter of the Regiment. (Photo by Jeff Roffman)

Last year, Blythe played Marquise of Berkenfield in the Atlanta Opera’s production of The Daughter of the Regiment, which ARTS ATL reviewed in a positive light. Blythe is closely associated with New York’s Metropolitan Opera, with whom she has performed regularly since 1995. More recently, she accepted a position as artistic director of the Bard College Conservatory of Music Graduate Vocal Arts Program.

ARTS ATL sat down with Blythe to chat about the upcoming show, thoughts on debuting the Atlanta Opera at Byers Theatre and more.

ARTS ATL: What is your favorite part about being in Atlanta?

Stephanie Blythe: My very favorite part is that my sister lives here, so I get to see my family. But I love performing with the Atlanta Opera — they’ve become a major player in the opera scene. It’s a really supportive, generous house, and singers love to sing here.

ARTS ATL: Are you excited to debut the Atlanta Opera at Byers Theatre? What makes this recital special?

Blythe: Anytime I’m in a theater for the first time is special. It’s like a pianist sitting down at a new piano — we carry our instruments with us, but the places we sing are what we have to make adjustments for. The hall is part of the instrument. It’s always an interesting exercise to see how your instrument is going to play there and how your voice is going to react to that hall. It’s always an exciting prospect to be in a new space. Stephanie Blythe performs at Byers Theatre on May 18. (Photo by Jeff Roffman)

ARTS ATL: What do you enjoy about performing classic pieces from musicals and film, and how does the repertoire differ from operatic pieces?

Blythe: It’s a completely different style — you sing American style different than how you would sing Puccini or Wagner. What’s wonderful about this is that you’re singing in your own language, which opera singers don’t often get to do if English is your first language. There are more operas in Italian, German and French than there are in English. It’s always wonderful to be able to sing in your own language for an audience that speaks that language because the understanding and connection is immediate.

What you’re going to hear this weekend is beautiful, healthy voices singing great music. A lot of this music is very nostalgic and will bring reminiscences to people. There’s something wonderful about singing an Irving Berlin [classic] for an audience that loves Irving Berlin, even if they don’t know that’s what they are hearing — the tunes are so familiar.

ARTS ATL: In addition to the concert, you are working with members of the Atlanta Opera Studio program. Can you tell me more about the program and what you’re working on?

Blythe: We’re working on a lot of music that we’re performing in the upcoming concert, and I’m also coaching on opera and songs. We’ll do some master classes, which are group events, but there will be individual coachings as well. Teaching is something I do all over the country — I enjoy working with the next generation of artists and trying to share what great artists have taught me. An important step in any career is to share what you’ve learned. It’s important to pass on what you know — it’s the last vestiges of oral tradition.

ARTS ATL: What upcoming projects or plans are you excited about?

Blythe: I have a summer song program I do in upstate New York called Fall Island Vocal Arts Seminar, which starts as soon as I finish this performance. It’s a week-long study of American art song written by living composers, and it’s all contemporary art song. We work with six singers and three pianists, and it’s very concentrated, exciting work. Then, I’m off to Tanglewood Music Center to teach for several weeks, where I’ll be working with another batch of fantastic artists.