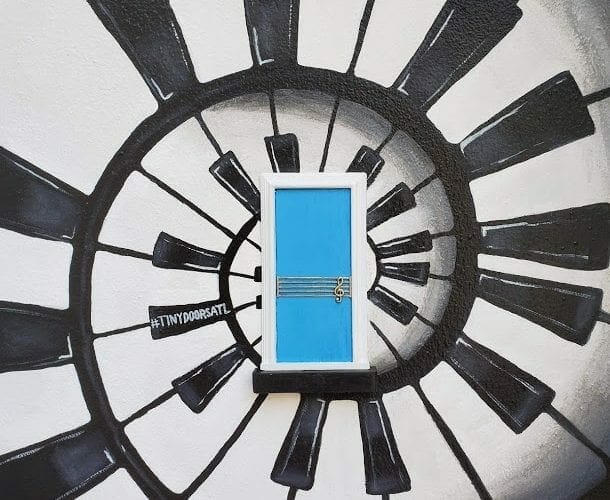 The ASO door — featuring a spiral piano keyboard — is the 18th from Karen Anderson Singer, the artist behind Tiny Doors ATL. The 7 Stages door, which features a miniature of the theater’s marquee, is No. 7. That number used to live at Charis Books before it left Little Five Points for Decatur. Singer has been waiting for the right opportunity to rededicate and reassign it. The 7 Stages tiny door is on the left side of a small alcove at the theater’s main entrance on Euclid Avenue. The miniature marquee at 7 Stages is new to Euclid Avenue. The wording on the marquee is changeable. (Photos by Karen Anderson Singer)

The ASO tiny door is outside the symphony side of the Woodruff near the drop-off/pickup roundabout (if you’re standing on Peachtree Street facing the arts center, it’s on the left side of the building). The door is taller and higher than most, Singer says, so that anyone wearing a nice symphony outfit can see it without having to crouch down.

As with all her tiny doors, these began when she built a wooden original, which was then cast in resin. Each takes Singer 50–60 hours to complete.

“These doors are here to engage your imagination,” Singer says. “When putting in new doors — which are only put in when invited — I think about how I can create the best blank canvas for your imagination.”

Of the tiny door requests she receives, Singer says “yes” to only 5–10 percent. It’s a matter of being able to maintain them, she says, because she visits each door regularly and spends at least 10 hours a week cleaning, repairing and replacing when need be.

You’ll find other tiny doors all around town, from the Krog Street tunnel to Buckhead, from Cabbagetown to Decatur and in the Old Fourth Ward, Inman Park, Grant Park, Midtown, Downtown, Poncey-Highland, East Atlanta and at various spots on the Atlanta BeltLine.

“Part of the longevity of this project is adapting and changing with Atlanta,” Singer says. “What’s important to me is that I stay culturally significant to the neighborhood.”