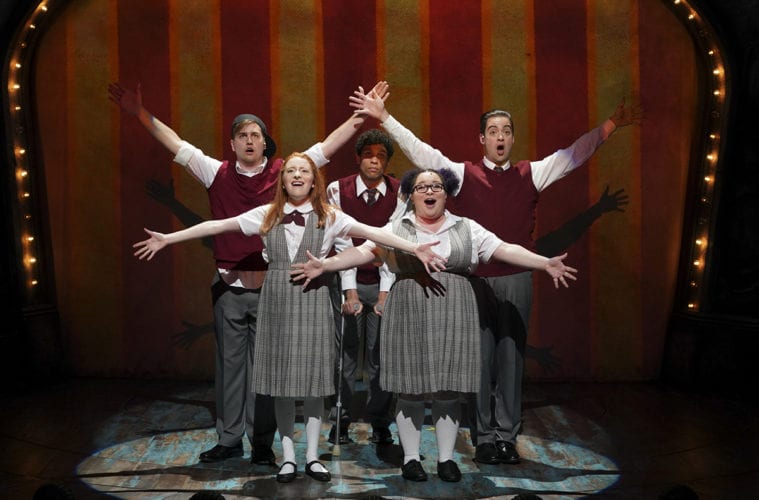 Summer is upon us, and one of the most beloved activities of the season is attending a carnival or fair with friends. The smell of funnel cakes and the roaring of roller coasters overhead welcome ticket holders into an atmosphere of fun and frivolity. Death, and the existential reckoning that follows, should be the furthest thing from a fairgoer’s mind.

It’s easy to forget how easily accidents happen, how quickly life can change when there are nothing but flashing lights, friendly faces and stimulating sounds all around. Yet, that’s exactly what a group of teens are faced with in Ride the Cyclone at the Alliance Theatre, onstage through May 26. The thrill ride of a musical takes audiences on a journey up and down through the triumphs and pitfalls of adolescence, friendship, love and life.

Part of the Alliance Theatre’s 50th season, this stylistically unique show transforms the Coca-Cola Stage into a slightly nightmarish resting place for carnival bric-a-brac wherein six children compete in a post-mortem game with a coveted prize. These children, just moments before, climb aboard the Cyclone, a roller coaster that derails at its peak and plummets the children to their horrific deaths. After their arrival in this strange space following their deaths, the children find themselves under the control of an animatronic “precognition machine” known as The Amazing Karnack. This machine was once a carnival attraction meant to predict a person’s time of death. For obvious reasons, Karnack sits decommissioned in this purgatory space, placed there to decide the fate of those who cross through. For these children, he extends the invitation to play a game that, for the winner, will give him or her a second chance at life.

The stakes are high as each of them play by Karnack’s ever-changing rules so they may return to their lives on earth. Karl Hamilton, who plays Karnack, controls his masked character in a robotic way, adding to the spooky sense that the characters have awoken in what feels like a bad dream and are under control of someone not exactly alive. Experienced in this role, Hamilton’s performance is entrancing, tricking the eye into thinking that he may actually be a robot in that box instead of a human actor. 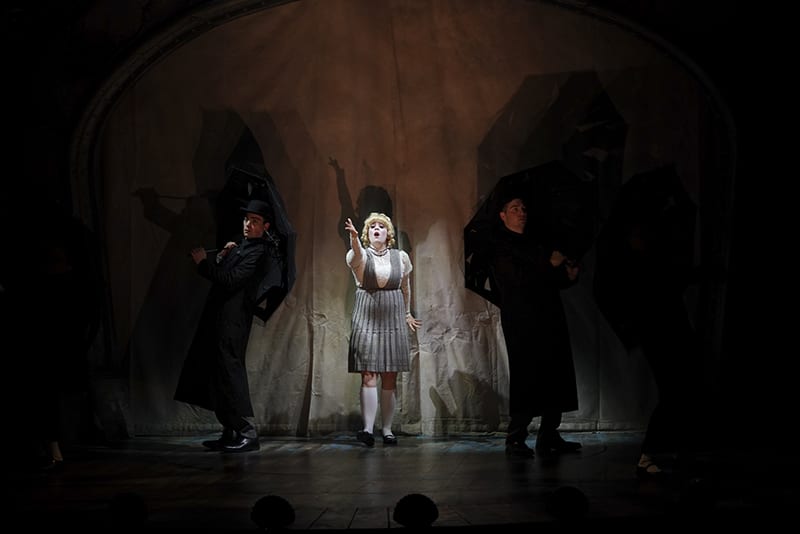 Though all members of the same choir, the characters possess wildly different and relatable personalities. Each coming-of-age story reminds the audience of what it was like to be young and unaware of all that life has to offer. All of the actors are extremely talented singers, making the stories they tell even more beautiful. A goody-two-shoes, her soft-spoken best friend, a passionate foreigner, an intense gay man and a quiet boy on crutches form an unlikely group of friends that, per Karnack’s rules, must vote unanimously on who will return to life.

Added into the mix is Jane Doe, played by Emily Rohm, an unidentified victim of the crash who inexplicably arrives in the afterlife as a doll. Rohm’s performance is scarily flawless as she moves through the space with hinged movements, perfectly emulating the movements of a doll. Through song, dance and storytelling, the characters are described by their signature catchphrases, zodiac signs and childhoods to reveal what made their lives meaningful.

The spectacle of this show is truly a sight to behold. The innovative lighting and set designs, by Greg Hofmann and Scott Davis, showcase how advanced the productions at the Alliance are. Ride the Cyclone first launched a decade ago, with a number of its cast members continuing in their roles as the show has moved from coast to coast. Keeping in mind the advancements lighting and design technology have made in that time, it’s easy to see that the designers upheld a standard of excellence for this production in order to showcase how lighting and set design can truly transform a space and create an amazing experience. A rotating set that carries characters through side stories, fog effects to play against the lighting changes and projections onto not only the backdrop but the characters themselves elevate this performance to make the world of this play fantastical and beautiful.

Ride the Cyclone is a stunning display of what the Alliance Theatre is capable of. Jacob Richmond, cowriter of the play’s music, lyrics and book, has said, “What we’ve found is that some people who don’t love musicals really like this musical.” This show offers a beautiful variety of music, stunning visuals and a story that will hit home. As we enter into the summer season, Ride the Cyclone reminds audiences that life is a short, painful, beautiful ride worth taking.