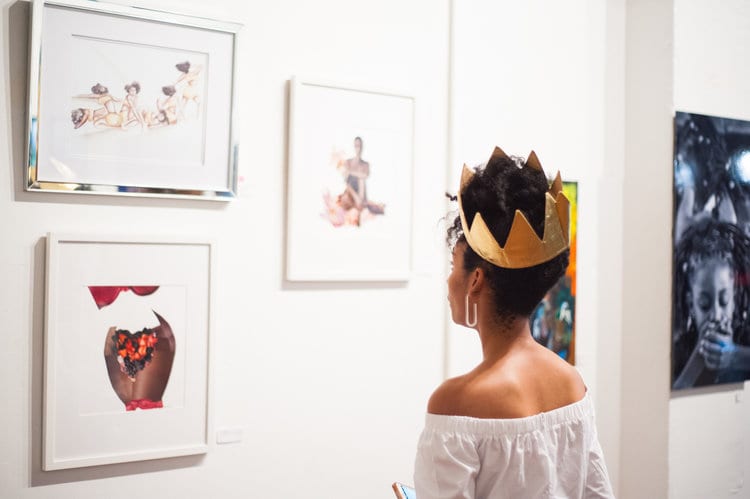 In an open letter to Atlanta’s arts community, a group of former TILA Studios employees alleges that executive director Tiffany LaTrice Williams has demonstrated “irresponsible leadership, financial mismanagement and lack of transparency.” Williams told ARTS ATL that she has been transparent and has offered to meet with the letter writers and hold roundtable discussions to address their concerns.

The open letter, posted Wednesday morning on Instagram, was signed by nine women, a mix of TILA founding members and employees contracted for #TheRoadToArtBasel campaign. The campaign, TILA’s largest project to date, sent 10 artists to the annual international art fair in Miami in December 2018. Williams founded TILA Studios in September 2016 as a for-profit coworking and shared gallery space in downtown East Point. This month it relocated to a 900-square-foot space at the Goat Farm Arts Center in West Midtown. Its mission remains the same — to empower black women artists in Atlanta to create and showcase their work.

TILA has a staff of two and is funded by private donors, corporate foundations and the $132 annual fee it charges its 81 members. When asked the size of TILA’s fiscal year budget, Williams declined to specify.

She attributed concerns raised in the letter to the challenges of keeping a startup company alive and said when she learned, in December, that the Basel project was offtrack, she reached out to employees and has been transparent ever since.

According to the open letter, Road to Art Basel team members and contract employees were to be paid in full by December 15, 2018. Most received partial payment in March 2019 and final payment in April 2019, months behind schedule. Final payments to the last two employees were made Wednesday morning.

“We decided to go public for so many reasons,” Allen said in an email, speaking for the group. “The most pertinent being because after five months, multiple contractors still had not been paid in full while Williams continued to take credit for and benefit off the work of unpaid contractors.”

When one contractor threatened public action, Williams paid her in full, Allen said. “Seeing this, we realized [that] when faced with public pressure, she was more likely to pay the remaining amounts due.”

Allen said a TILA team member has reached out to the signees to schedule individual meetings with Williams and her advisers. They declined, wanting only to meet as a group. The signees are still deciding on how to respond to the roundtable invitation.

Williams, a visual artist herself and the recipient of ARTS ATL’s 2019 Luminary Award for Arts Innovation, said it’s important for her to honor the contributions of the community by taking a moment to listen, learn and grow with integrity. “Growing and building an organization like TILA has been one of the most beautiful journeys that I have ever embarked on,” she said in an email. “As amazing as this journey has been, it has not been an easy one.”

The signees of the open letter are asking Williams to make six changes at TILA. She responded to each in a phone conversation with ARTS ATL:

Signees: Immediately pay all remaining debts owed to contracted employees in full and acknowledge the financial, mental and emotional hardships to which they have been subjected.

Williams: As of this morning, all parties have been paid in full.

Signees: Convert TILA Studios from a sole-member LLC to a 501(c)(3) nonprofit with a board of directors to provide insight and accountability.

Williams: It’s my company, and that’s the end of that.

Williams: TILA is hiring a human relations business partner. For a startup company, hiring a CFO is too expensive.

Signees: Immediately compensate all staff members for their time and efforts going forward.

Williams: That has been my upmost priority since this situation happened.

Signees: Be accountable to sponsors, organizations, publications and peers who have elevated you to figurehead status.

Williams: I am very humbled and honored to do this work. I have spoken with each of my stakeholders about where we are and where our growth strategy is.

Signees: Publicly apologize to the arts community for exploiting the work of black women and contradicting the mission of TILA.

Williams: I have apologized and invited them to a roundtable conversation with multiple arts leaders and organizers. We are moving forward.