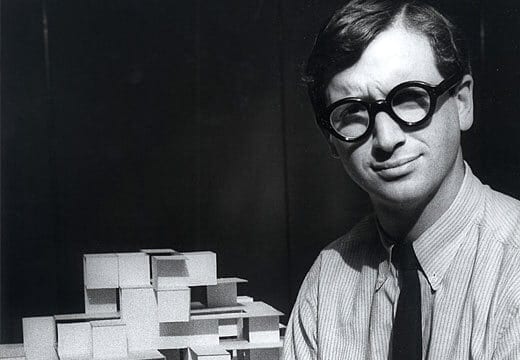 Any avid Target shopper is sure to have heard of Michael Graves — his name adorns kitchenware spanning from tea kettles to toasters. But before he became well-known for designing consumer goods, Michael Graves rose to prominence as an architect, and like most prominent practitioners of postmodernism, his buildings became distinctive statements in cities across the country known for their use of crazy imagery and geometry.

One of his notably infamous projects, the Portland Building, is a seminal piece of postmodernism defined by its rigid use of geometry, bright colors and deployment of over-sized and dumbed-down classical elements, including a four-story keystone motif. Completed in 1982 to serve as the municipal building for the City of Portland, Oregon, it is considered the first major postmodern project.

While the building itself is a unique statement, the most captivating feature is a nearly 35-foot-tall sculpture of a mythical creature Graves named Portlandia, seemingly springing from above the entry of the building. The sculpture is the second-largest copper repoussé statue in the United States (second only to the Statue of Liberty).

Though met with a lukewarm response, the building steadfastly solidified Graves’ role in the shaping of postmodernism. He would go on to work on a number of notable projects including the Humana Building (Louisville, KY, 1985), Disney’s Dolphin and Swan resorts (Orlando, FL, 1990), and the Denver Public Library addition (1995).

Graves designed two buildings in Atlanta during his career, with Ten Peachtree Place in the heart of Midtown representing a restrained postmodernism that provides a unique feature within the urban fabric around Midtown MARTA Station. The façade of Ten Peachtree Place.

While many of Graves’s designs employ the use of bold colors, stark geometry and whimsical imagery to attain a child-like playfulness, Ten Peachtree Place is a relatively restrained structure in his portfolio. Completed in 1989, the building is notable for its use of red granite on the façade.

The bright red is contrasted by dark black windows, which are arranged in bands wrapping the building’s corners, creating polychromatic striping running up the façade.

One of the key features of postmodernism is the restatement of classical elements in a stripped-down style. Ten Peachtree Place is a prime example of the concept.

The base of the building is defined by tall piers that support the tower over the sidewalk, creating a dramatically tall loggia along Peachtree Place. The center mass of the building contains an arch above the main doors, breaking the repetitive horizontal banding that encircles building. Crowing the structure are recessed windows and a protruding horizontal band, which together create an abstracted dentil cornice. All three features date back to Roman architectural design.

The building also alludes to neoclassicism, utilizing the tripartite façade composition employed since the design of the first skyscrapers in the late 1800s. The building features a distinct base, a middle (shaft) and a top (capital), demonstrating early architects’ reconciling of tall buildings by employing the language of classical columns.

At the base, Ten Peachtree Place is defined by a heavy style of architecture, with punched openings across much of the first six stories leaving more red granite exposed.

The middle section of the façade — some 11 stories tall — represents the shaft of the column. While the horizontal banding continues on the corners, the front and rear faces of the building are sliced by two long vertical recesses with windows and black stone, drawing the eye up and accentuating the verticality of the building.

Finally, the top floors are defined by a double-height colonnade, creating the cornice of the building — the capital of the “column.”

Dominated by rigid rectilinear geometries, the building is restrained in its expressiveness, differing from many of Graves’s more flamboyant projects. The second of Graves’s Atlanta built-works is the Michael C. Carlos Museum on the Emory University campus, which opened in 1993.

Located on the main quadrangle of the university, the building stands wall-to-wall with classical academic facilities dating to the early 20th century. The architectural language of the Graves building is referential of its austere grey marble surroundings; the building’s distinctive polychromatic banding ties the structure to Ten Peachtree Place and the legacy of postmodernism.

Like Ten Peachtree Place, the Carlos Museum employs rigid geometries such as square windows, triangular grand stairs and a triangular entry portal. However, Graves went to great lengths to maintain classical proportions and features to restate the context in a postmodern way.

Some may argue that much of the flamboyant postmodern work of Graves — including his Atlanta projects — and others are dated relics, making the buildings easily identifiable to the 1980s and 1990s. It is a fair criticism, as postmodernism had a relatively short-lived period in the field of architecture.

The same cannot be said for other works that bear Graves’ name.

Graves’ ability to bridge the divide between architecture and consumer products in his later career was a testament to the relatability of his styling. He melded functionality and eccentricity to create engaging pieces that were available to the masses. And while buildings with a bit of whimsy may not age well, kettles and toasters that can add a smile to the daily routine likely have a longer run in the world.